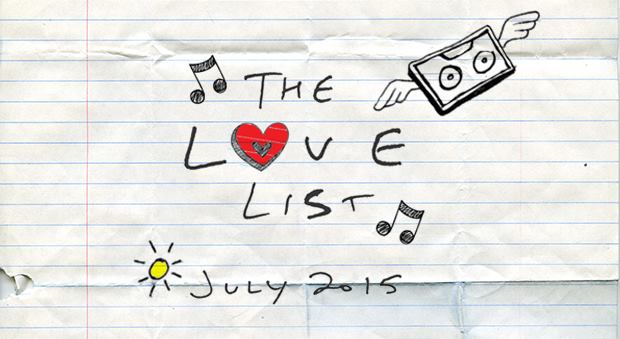 It’s that time of the month for another episode of the Love List! July was certainly a great month for music–so many amazing albums, EP’s, VA’s, singles, and remixes released over these past 31 days! As always, it’s an arduous task to just pick out 20 tunes from the month, but we finally managed to filter it down. Here is a list of some of our favorite tracks that came out in July 2015. Enjoy!

In no particular order…

1) Powel –  Crash Landing On Laputa (All Day I Dream) — 2015-07-31
One of our favorite producers, Powel, delivers his long awaited EP on Lee Burridge’s famed ADID.  An ethereal piece of work, each track off this release is a beauty, and the title tune is a great way to start off any mix.

2) Punu – Wildcards [Sintope Digital] — 2015-07-13
Sintope Digital is a label that has been putting out some quality music over the years and they hit the nail on the head with their latest release fro Punu. A solid two track release, Wildcars made the cut for this mix, but don’t count the flip side of the release out, its also a gem.

3) Hot Since 82 – Play The Room (Matthias Meyer’s Morgenstaub Remix) [Saved Records] — 2015-07-13
This release sees two giant artists collide as Matthias Meyer takes Hot Since 82’s tune and takes it to another level with his finesse. Another stunning piece from this producer, Matthias is the man!

4) Clarian – I Was Born In Outer Space [Anjunadeep] — 2015-07-17
Another producer that has been putting out loads of amazing music, Clarian is back again with another epic release, this time on the massive Anjunadeep.  Each track is just as special as the next, but this was the tune that seemed to fit oh so well.

5) Lehar – Zephyr [Connaisseur Records] — 2015-07-13
Connaisseur have been putting out some incredible music this past year and have firmly established themselves as top label.  For this release we see Lehar, who also has been having a great year strike once again with this massive tune.

6) Several Definitions – Everyday [Diynamic] — 2015-07-03
The powerhouse that is Diynamic gives us the another huge release, this time in the form of a VA featured 4 massive tunes from a few new artists.  All anthems just in time for summer. Expect to hear all these tunes, especially this one, being played by your favorite DJs.

7) El_Txef_A – The Love We Lost feat. Woolfy (Bedouin Remix) [Forbidden Colors] — 2015-07-13
Bedouin have taken the world by storm with their mystic sound.  For their latest release we see them remix El_Txef_A and oh is it so nice, another stellar effort from the two.

8) Eagles & Butterflies – Lost In A Dream (Slow Hearts Remix) [Spread Your Wings] — 2105-07-20
Eagles & Butterflies has been having an incredible past couple of months putting out monster tunes on some of the biggest labels in the game.  For his latest we see him release on his own imprint and the Slow Hearts guys deliver with a lovely remix.

9) Ominous ft. Cari Golden – Shattered [Motek Music] — 2015-07-06
Jonny Cruz’s new music project, Ominous, comes strong out the gates with their debut EP on fast growing label Motek. Featuring some killer remixes, the tile tune, featuring Cari Golden, is a deep and sexy tune that just gets you in the groove.

10) David Keno & Mat.Joe – Early Morning Feat. Shamoozey [Katermukke] — 2015-07-15
Katermukke is another label that we can’t seem to get enough of and just in time for Summer they give us a massive VA release featuring so many good tracks it was almost impossible to not pick many of them. One stand out track on the release is the collaboration between David Keno and Mat.Joe.  A funky tune with a great vocal hook, this tune is catchy and fun.

11) Davi – Metanoia (Club Mix0) [Tenampa Recordings] — 2015-07-06
Davi is another producer who has been putting out some serious tunes and he delivers with another mystic giant in Matanoia EP. All the tunes on the release are choice and the title track is a perfect journey tune to entrance you on the dance floor.

12) Carlos Pulida & Lopezhouse ft. Djuma Soundsystem – Don’t Tell Me [Elite Records] — 2015-07-01
When you see Djuma Soundsystem’s name attached to a tune you’re pretty sure you can bet it’s going to be dope and this tune is no exception.  A deep and sexy release, this one is all sorts of yes!

13) Human Life ft. Jackson Englund – Coming Down [MadTech] — 2015-07-24
Human Life has had a great year so far and has been putting out tunes on some big labels such as Exploited.  For his latest we see him feature young vocalist Jackson Englund for this tune, perfect for the long summer weekends.

14) Felkon – Creixell [Soulfood] — 2015-07-06
Soulfood is another label that has been putting out some deep behemoths as of late and they give us a wonderul VA featuring this power house of a tune.

15) &ME – Trilogy Feat. Sabota [Keinemusik] — 2015-07-10
&ME is another epic producer who has been just putting out bomb after bomb lately and we see him deliver once again with a two track stunner on Keinemusik. Both tunes are pure class, but the title tune ended up making the cut.

16) Patrok, Matushka, Apfelberg – Nai Nai [Kompakt] — 2015-07-27
Kompakt is a label that has been leading the way musically for years now and we see them once again prove their dominance with this stunning release.

18) Hot Chip – Need You Now (Dennis Ferrer Remix) [Domino] — 2015-07-10
Dennis Ferrer is sort of a legend and we see him remix electronic mega group Hot Chip for Domino.  A crisp and groovy version, this one has a load tech to get you to step.

19) Kid Creme – Austin’s Groove (Creme’s 2015 Relab Mix) [Suara] — 2015-07-27
Suara has firmly planted themselves at the top of the label game and I couldn’t imagine them going anywhere but up putting out releases such as this.

20) Ashworth – Cork [Needwant] — 2015-07-06
Ashworth comes out with a stunning debut album on Needwant.  So many of the songs on this release are gems, and this tune is definitely a stand out on the album, and a perfect way to end any mix.