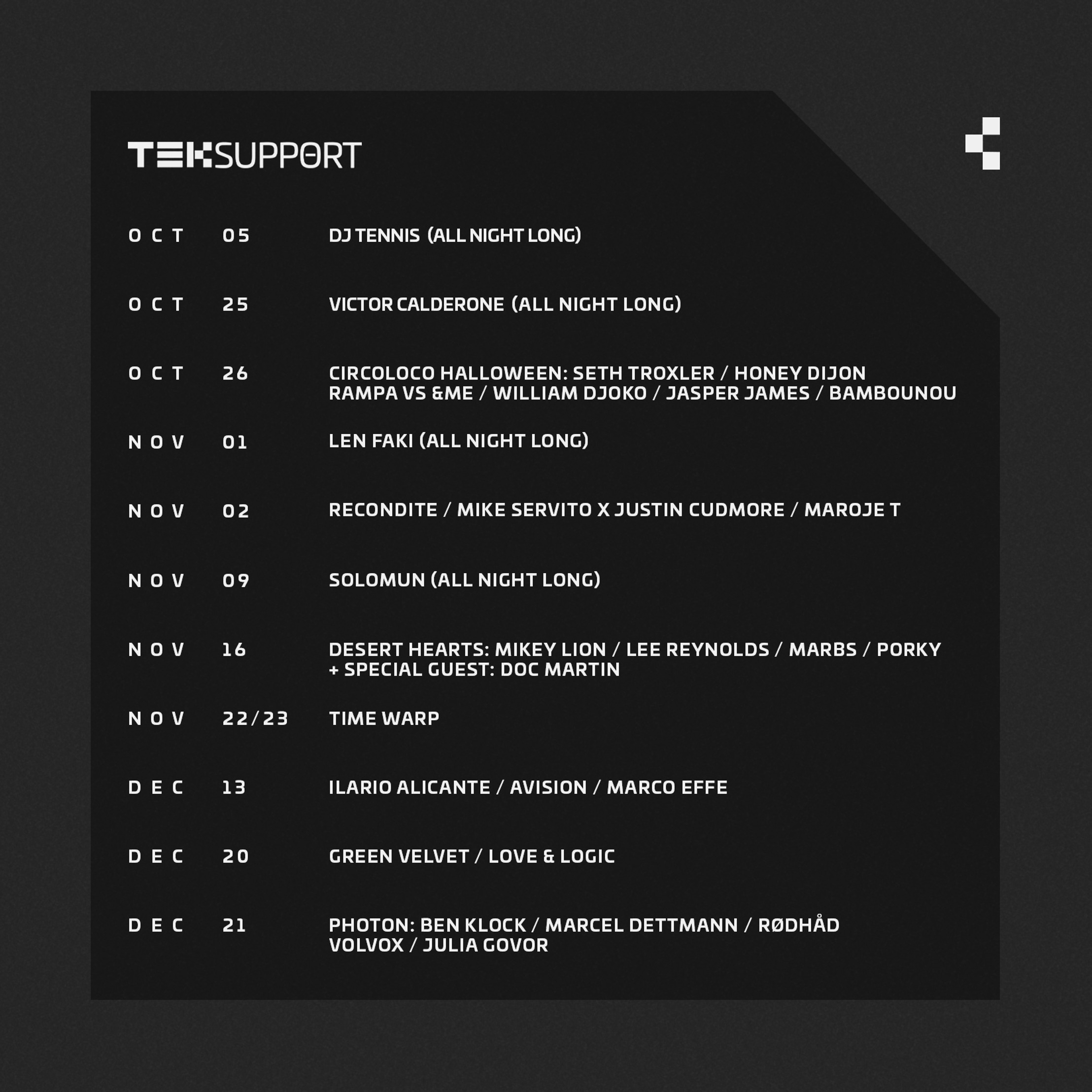 It may be autumn, but things are heating up in New York this season with the release of Teksupport’s fall calendar. Celebrating its fifth year of inception, the house and techno event producers will host some of dance music’s biggest names over the next few months.

Life and Death enthusiasts will be treated to an open-to-close DJ Tennis set this coming Saturday, October 5. Partygoers will likely get a taste of his forthcoming collaborative project with Red Axes and Redrago. To close out the month, Ibiza staple Circoloco will return for its annual Halloween soiree featuring Honey Dijon, Seth Troxler, &ME vs Rampa, and more.

Taking the lead on all-nighters in November are Berghain regular Len Faki on November 1 and Diynamic owner Solomun on November 9. Dance floor enthusiasts seeking an experimental experience will be exposed to just that on November 2, as Recondite, Justin Cudmore & Mike Servito and Maroje T unite for a night. After giving New York a crazy Elrow show this past summer, the Desert Hearts crew will be returning with its southern California funk to the raw warehouse scene of Brooklyn on November 16.

The moment we’ve all been patiently waiting for, Time Warp’s return stateside, November 22 and 23. One of the most highly regarded institutions in dance music, the two-day event will see the likes of Cocoon founder Sven Väth, minimal star Ricardo Villalobos, techno goddess Amelie Lens, global sensation Peggy Gou and more. Taking place at the New York Expo Center, the production will feature high caliber sound and visuals to commemorate this special occasion.

December takes us around the world as Italian techno titan Ilario Alicante takes over the decks on with fellow Drumcode comrades Avision and Marco Effe, while Chicago’s Green Velvet smooths out the bill nicely. Finally, the season is set to end with a bang on December 21 as Ben Klock gears up for a Photon showcase alongside fellow German techno heads Marcel Dettmann and Rødhåd.

It’s going to be a great couple of months for New York City! Get your tickets to Teksupport tickets here.