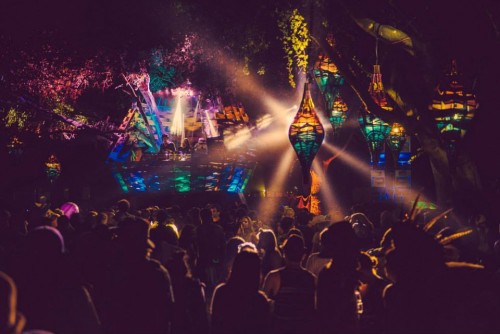 ‘Senior Standouts’: The Best Acts of Lightning in a Bottle 2013

Words cannot even begin to describe the mindblowing, transformational, enriching experience we each had at Lightning in a Bottle. Life Changing would be a good one. We have a mini-documentary in the works, so for now, we will keep our review short & sweet with some of our ‘Senior Standouts’ a la high school year book style.

Most Popular: The Woogie

It was pretty obvious from our Top 10 Must See Music Acts at Lightning in a Bottle 2013 that our heart & soul lie with The Woogie. Despite the fact that they are the smallest stage at LIB, for us, they are everything. The Woogie, which is put on by Pocket Underground, a collective of badass goofball DJs in Southern California, was a complete wonderland this year. This year The Woogie was so geniusly and beautifully built up in a tree. Surrounded by a grove of trees with art hanging all around and enclosed by brightly draped tall towers with misters spraying water down and a cool constant breeze, The Woogie was most definitely an oasis in the death defying heat. The artistic vision added to everything at LIB truly invites you into this wonderland, but it’s The Woogie’s secluded location, smaller size, and intimate vibes that truly allow you to become completely lost in the fantasy.  Add in the lure of the most soul enriching house and techno and you have your weekend made.

Hands down the happiest I was all weekend was Saturday during Patricio‘s set and I know many friends that shared that same sentiment. Something about the energy during his set Saturday was infectious. It was another scorching day on Saturday but just before Patricio’s set the misters starting spraying cool water over the dance floor at The Woogie and the energy sparked up. As a large amount of people gravitated towards the wonderland, Patricio took to the decks, and mesmerized in the sunshine and soulful beats, we got lost in sublime happy vibes. Patricio set the vibe for the day and the master of The Woogie, the infamous, the notorious Sir Sammy Bliss took to the decks and in the most effortless groove took over and kept the vibe on the utmost happiest of highs.

When they got on the mic and said “You thought you knew techno?” … well, after those two sets. NOW you know techno.

Flawless. Simply flawless from beginning to end. Tim Green was beyond impressive throwing down some of the dopest techno. As our editor Terri described, he was “the most quintessentially woogie”.

WOW. For both of these acts … simply WOW. Eyes closed, out of my mind, completely fully totally lost in it. From beginning to end, both Thugfucker & Lee played the type of set that was a total journey, a total and ultimate trip. Thugfucker has and forever will be one of my all time favorites for appealing to my insatiable desire for deep, dark, heavy and twisted beats. The sexy side of darkness, their sets never fail to impress and this set was one of the best we’ve heard thus far.

As for Lee, I’ve said it before and I’ll say it a million times more, All Praise Lord Lee. While I am a self-proclaimed addict to Lee and his All Day I Dream parties, it’s been a while since I’ve experienced just a normal set of his. The removal of Lee from his typical ADID setting allowed for less of a melodic journey and allowed him to give it to us straight. Following the impeccable set of Tim Green, Lee fed off the high energy and delivered one of the most banging techno sets. The energy and vibe of the crowd during his set was on another level as the golden glow of the sun was coming down behind the DJ nest in the tree, with people up on speakers and up in the trees, people were getting down.

Francois K was a flawless transition from Lee. A true master that could have played any which way, Francois chose to keep that ridiculous energy that had built from Tim Green into Lee Burridge and threw down one of the best techno sets we have ever experienced.

Acid Pauli delivered an insanely impressive and mindblowing experience to close out the festival. True to his style, he took to the tree house and took us for a journey. Leaving behind the techno trail and weeding out the high chasers, what was left for the end was a smaller more intimate crowd that had been waiting all weekend to truly experience the mystique that is Acid Pauli. It was everything we could have hoped for and more, with a more melodic beginning, he took you for a trip and smoothly built the vibe back up. It was different and divine.

It goes without saying that Nico was among the most artistic sets at LIB. Absolutely mindblowing and innovative. Although we were a bit disappointed that Nico did not have his band in tow for a full live experience, we were nonetheless still blown away and beyond impressed. Nico mixed it up by playing all our favorite tracks of his but at an upbeat more dance friendly pace to get the crowd grooving.  He was accompanied by an astounding visual show to accompany his music that truly  helped to take you to another level.

Lucent Dossier is always mindblowingly impressive. Lucent Dossier Experience is, at its very core, a playground for the innovative genius child in all of us. It is a collective based on magic and inspiration, living by the ancient wisdom of choosing confidence over doubt, joy over pain and love over fear. A band of gypsies of the most radiant souls, they take the stage to perform cirque du soleil type acrobatics and emotive dances to their own live music. Lucent Dossier is an experience and one that always leaves you in a state of awe.

Our good friend Gaby of mybeatfix suggested we go check out Purity Ring and we are most certainly happy we did. It was a beautiful performance.

Guilty of not listening to much other than anything and everything electronic, I was really surprised by how much I loved Vokab Kompany. Based out of San Diego, this hip hop, electronic, soul, funk crew has the type of vibe that makes anyone get into it. Definitely gonna be expanding my horizons with this one.

The One That Got Away: William and the Earth Harp

The Earth Harp is the longest stringed instrument in the world, with strings that extend up to 1000 ft in length. The first Earth Harp was invented and created in 1999 by artist/musician, William Close. Having seen performances on earth harps in the past, I know what a truly beautiful experience it can be to witness. Was really disappointed to have missed this performance, but heard nothing but the best rave reviews.