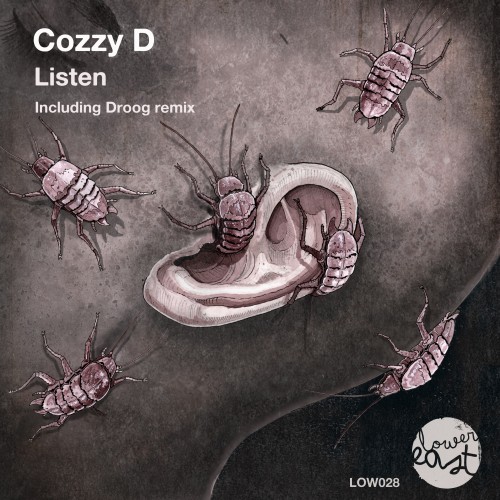 [Release] British imprint Lower East kicks off 2013 with ‘Listen’ by label-head Cozzy D, backed with a remix from L.A based production trio Droog. It’s been a great year for Lower East with releases from some of 2012’s most promising up and comers such as Viadrina, Alexis Raphael, Rebel and Michael Jansons. An indication of the attentive A&R approach and eclectic tastes the label owners opt for to keep things exciting.

The original version of ‘Listen’ opens the release here and Cozzy D delivers what’s becoming a signature sound for the London based producer, raw, emotive deep house with a contemporary forward thinking aesthetic embodied. Heady, shuffling drum rhythms lead the way alongside elongated, warbling sub-bass and a tight blend of vocal lines all intricately delayed and modulated to create an intense evolving dynamic. Cozzy nails it again with a peak-time, energetic cut.

Next up is Droog’s (aka Andrei Osyka, Brett Griffin & Justin Sloe) remix, the trio are most notably known for their events at the Standard Hotel in L.A and have built a highly praised reputation through doing so. The mix takes on the form of dark, melody driven house as expected from these Crosstown Rebels, My Favorite Robot and Supernature artists. Their Culprit label played a leading part in driving this moody low-slung house sound and here they turn in just that.

To close the release Cozzy D drops ‘Stalker’, embracing a brighter, deep-house feel with swung 909 drums and a bumping tom-driven bass-line. He again displays his more than proficient production abilities cleverly manipulating an amalgamation of vocal one-shots to create their own melody entirely, further fuelling the weighty groove.

Lower East deliver yet another refreshing EP here with ‘Listen’ and it shows that 2013 is set to be another stellar year for the label.