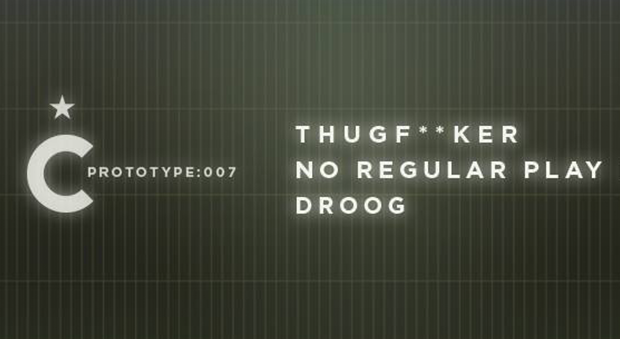 Los Angeles’ freshest new dance party — Prototype — delivers their 007th installment at Lot 613 this Friday, April 24th; featuring Droog, back for the 3rd time to host another Culprit edition with Thugfucker and No regular Play live! Culprit and LA go together like peas and carrots and we are elated to see them return back to the night with their new monthly party in DTLA. We had the chance to speak with Culprit head honcho Andrei Osyka about Culprit’s return to events as well as what they have in store for 2015.

We love that you are doing more Culprit events in 2015, especially night parties, what inspired you to take it back to the night?

In a nutshell, we were looking for a new challenge, something fresh for Culprit on the promotional front. It’s fun to expand the perception of it as the, predominantly, daytime party brand. I think it’s always been more than that, but we’ve certainly become known over the years as the rooftop series. We want to show that we can translate the Culprit feel to a different environment, after 6 years at the Standard. But we didn’t just want to do nighttime parties for its sake or to prove ourselves again, it had to be the right set of circumstances, which the Prototype series provides us with.

Can you explain a little more about the prototype concept?

Basically, we really like the venue – Lot 613. The parties we did there before – Visionquest in Nov. of 2013 and Apollonia last July – were two of our favorites. We like the location in the artist district, it has just the right feel – it’s the good mix of the crowd who like to come out there and the place itself is simple enough that it affords us a chance to mold it to our specifications, so to speak. We bring our own sound, lights, visuals – really being able to create the feel we want.
Doing a monthly within the series is just right, it gives us a regular outlet for building something from ground up, according to own vision.  We get to share the space and the overall concept of it with other promoters we respect like Making Shapes, Droid…and we like the Prototype team, who have, sort of, taken over the venue for 2015 and are helping to curate the whole thing. It’s just a good match. Some of the best underground dance music that has come and will come through LA in 2015 is Prototype.
Both headliners are released on Culprit, can we expect a repeat release with either of the artists in the near future?
Would love that, of course. Big big fans of both acts, so here’s hoping 🙂
Who else do you have on the radar for your upcoming parties?
It’s going to be well-balanced mix of the classic and the new…Some of our influences and artists we’ve always looked up to – for example Move D next month  – and the newer acts that have that special quality, who with time will join the ranks of the classic acts, in our opinion. One thing is that we don’t really want to do is chase whatever is the most current sub-genre fad or try to anticipate who people will be most hyped about. We have a notion of who/what is both exciting and timeless out there and we will stick to that, regardless. Hopefully, people will trust our choices.
Being an LA resident, how does it make you feel when many people say that the LA underground is lacking?
It’s all subjective isn’t? Some people’s experiences with the underground are really vibrant, to some LA is not quite the underground dance music nexus it could be. I think it’s a bit of both. There are some real obstacles that LA scene has yet to overcome – iImean, the 2am liquor law and how it effects permitted venues is a big negative factor. It’s just unreasonable for a major metropolis like LA to deal with that, it’s draconian. The city’s sheer size is a challenge when rallying people to your cause, and its relative lack of urban street culture is another shortcoming. But that just means you have to work a bit harder to make things work, and, if like us, you go exclusively the permitted event route, you have to be a bit creative. Which is not a bad thing.
What does Culprit have in store for the rest of 2015?
Keep on building our parties at LOT 613. And, as usual, keep taking our show on the road, Europe and Middle East are on the agenda in the summer/fall, with South America at the end of the year. Not forgetting primary function as a record label, of course. Mo’ better music, all the time!

No Regular Play Live at Lovelife 2012* CLICK HERE if you do not see the SoundCloud player.

Lovecast Episode 077 – Droog
* CLICK HERE if you do not see the SoundCloud player.