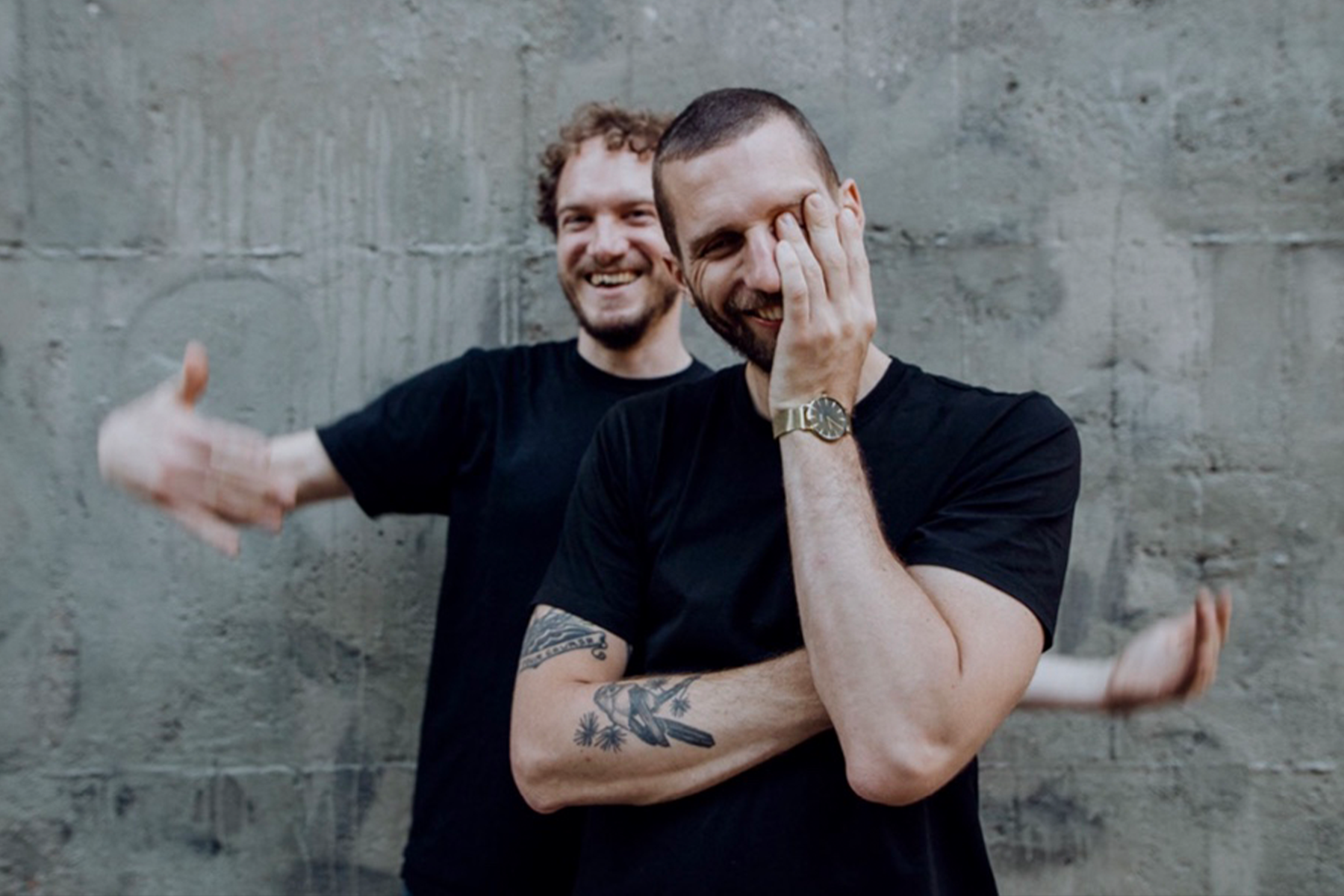 It’s a pleasure to introduce to you ‘Sound Support’, a collaboration born out of Detroit Swindle’s critically acclaimed live act, between Lorenz Rhode and the Swindles own Lars Dales. These guys started making music together a while back and the result is finally here for your listening pleasure.

Dutch super duo DS have been flying since 2011, going from strength to strength. Riding high with releases on their own Heist Recordings as well as AUS, Strut and countless other labels. German keyboard player Lorenz Rhode possesses some exceptional skills on the piano and vocoder and has contributed to hi profiles remixes for the likes of Jamie Lidell, Yelle (Kitsune), Moulline (Gomma), Strip Steve (Boysnoize). This is naming just a few.

As ‘Sound Support’, these two share a love for all things nerdy and programming. Their countless studio sessions have led to a staggering amount of material, this offering finding its way to Oslo wonder boy Prins Thomas and Wordandsound’s Kai Frager’s label Internasjonal. As the label is a platform for retro futurism and house not house, it is a perfect home for this release.

Nordic Wizard Prins Thomas lulls us into his brightly hued utopia of disco-rock and faded early house days, with his take on ‘Europe’. It’s a treat for the feet and the senses, a ‘Diskomiks’ classic that doesn’t disappoint. 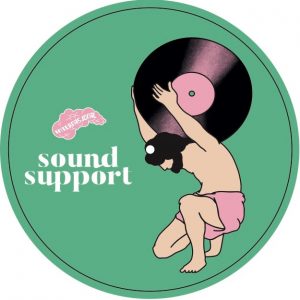 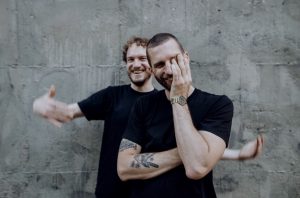 1.) We’re really excited about the new release guys. Sound Support, What can you tell us about this exciting new duo? Who are you both? Where did you spring from? How did you get together?

Lars: Sound Support came to be when me and Lorenz started making music together in between liveshows. We’ve known each-other for 10 years ever since I booked Lorenz at my party in Amsterdam and we’ve remained friends ever since. But I’ve been in electronic music for quite a while, throwing parties, DJing and most crucially with Detroit Swindle and our label Heist for the past decade.

Lorenz: Lars and I have always shared a mutual love for quirky and odd things, whether it’s nerdy stuff like synthesizers and drumcomputers or just popculture and silly puns. That plays a big part in the studio too. I dare not tell you what the working titles of our tracks are. My background has been as a solo artist since 2005, but I’m also – for something completely different – leading the 15 piece orchestra of a TV late night in Germany.

2.) If you could describe your music policy, what would you say?

Lars: We like to keep things completely open but with working with vintage synths you always get that throwback vibe. Lorenz is an absolute beast on the keys and he knows every synth front to back so we try to get the best sound out of every part we record.

3.) So you are both part of Detroit Swindles live act. What was like playing live together? I’ve seen pictures and you look like you’re having a hell of a time!

Lars: It has been an absolute hoot. It’s not easy carrying around 300 pounds of gear, but being on the road together and making music (and dad jokes) is something I’ll never forget.

Lorenz: And playing everything live keeps the songs fresh for yourself. Cause you really need to work to, well, make them work! And then when you’re in sync and they come together, that’s a real high.

Lorenz: Im based in Cologne which is only a 2,5 hour trainride away from Amsterdam. We try to move back and forth once every two months or so. But in between we keep in close contact over facetime and send each other the projects to work on.

Lars: We both have our studios and by sending the music back and forth, and communicating endlessly, we get things done. The studio sessions that we do together are the magic ones though! We tend to record 4-6 tracks every time.

5.) The ‘Stab By Stab’ EP. What can you tell us about the four tracks of this release?

Lars: The title track is inspired by older tracks from the late 70’s, early 80’s when tracks were supposed to be massive epics. It really is a journey, a bit of melancholy, a lot of euphoria. We actually had a hard time making an ending, we never wanted it to stop.

Lorenz: ‚Europe‘ is something a bit different, based on a breakbeat that Lars started (he simply has a knack for drums that set the scene and get us going). It ended up somewhere between Massive Attack and a Herbie Hancock tune.

Lars: ‚Catwalk‘ is a special one cause it’s actually the first song we ever did for Sound Support! I remember we had synced the SH-101 synth to the TR-707 drum machine, so that bubbly bassline is proper old school 🙂 And yeah eventually we were just dancing about the place and thought we should do this more often.

Lorenz: And getting a Prins Thomas remix was something we looked forward to a lot, obviously. I’ve always loved 4/4 tracks with a breakbeat, he gave it a whole new energy. Super nice.

6.) You are dropping this EP on respected label Internasjonal run by Norwegian nu disco wizard Prins Thomas. What a great label! How did that come about?

Lars: We’d just been working with him for our Label ‚Heist‘ that I’m running together with my partner Maarten. Prins Thomas did a remix for the latest DS single ‚Coffee in the morning’. When we looked at the material we had with Sound Support I immediately thought of Thomas. And here we are!

Lorenz: Internasjonal had been on our wish-list of labels every since we started thinking about quality labels we wanna work with. So we’re very happy signing two EP’s with hem. Yes, two. The next one will drop early next year.

7.) What parts do you both play in Sound Support? Do you feel that you both bring something different to the party?

Lorenz: Yeah I’d say so, that’s why it’s so fun to work together I think. Lars kickstarts most of our sessions with a beat that he cooks up and refines in no time, and that’s why immediately we’re off and inspired. One of the best beatmakers I know, but he does a lot of basses, arpeggios and other parts too. And I’m happy to let him be in charge of the computer and arrangement, while I just bounce between 20 synths and play. That’s my favourite thing.

Lars: That’s a very good question, cause in a duo it usually gets tricky when both wanna do the exact same thing. It feels great that we both have our own playground, it can make you faster too! Because you don’t debate every little bit while you’re doing it.

8.) Track ‘Europe’ is remixed by Prins Thomas. How would you describe what he has done to the track

Lars: I love how he picked up the vibe, and perfectly amplified that underlying intensity with the steady bass he added. And lovely drums too, he hit that early 90s throwback style spot on. We;ve seen from the DJ feedback that we’re not the only ones that love it!

9.) How are you keeping yourselves motivated during this crazy time?

Lorenz: Well honestly I think working is the best thing you can do right now. I think it kept me sane – not that I’m oblivious to what’s going on, but I don’t need to participate in Twitter wars. So as a result, strangely, the past months have been very productive.

Lars: It’s definitely been the biggest change not DJing and traveling much anymore, but making music in the studio is like a mini holiday from the craziness. Start some loose jams around noon, have Ramen, get some beers after dark as the songs start coming together.. and the next morning you’ve created something of value.

10.) What can we expect to see next from Sound Support?

Lars: Quite a lot actually – as mentioned before the next EP for Internasjonal is done! But we have 2 other EP’s signed and lined up alrrady. Oh and we just did a remix that’s coming out early December.

Lorenz: It’s an exciting moment, getting the first rounds of feedback after we’ve worked by ourselves for so long. Can’t wait to make more.

Thank you very much for talking to us today!

Lars & Lorenz: Bye and thank so much for the interview!