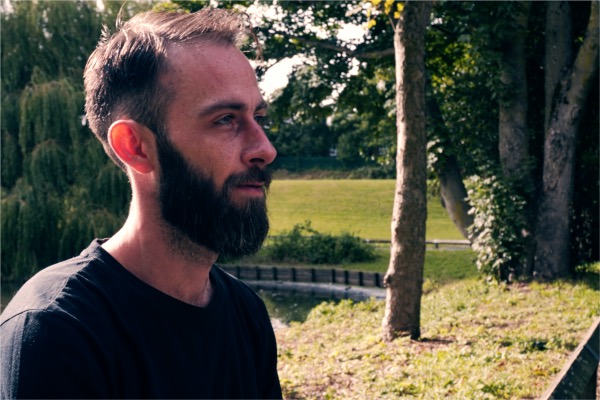 Lee Burridge has a knack for bringing musicians into the All Day I Dream fold with a special dedication toward the music and their craft, and their new release with Pippi Ciez is no different. Having began his journey in production at the age of 15 and created a living for himself DJing by 19, Pippi’s bond with electronica was clearly set for life.

However, there was something missing for the artist when it came to complete fulfillment. He eventually found out what filled the void, however: teaching. Selflessly, Pippi has spent most of his adult life lifting others up in their own dance music endeavors, working on behalf of the Birmingham government for three years leading music programs for underprivileged youth and later traveling to India for the same work. Now, he continues providing education to others in group classes and in one-to-one settings.

Pippi’s love for production never burnt out thought, and has in fact been reignited in recent years. Having homed in on a lush, melodic sound that captures his innate sentimentality, the producer created a new home in his own Inward Records and other imprints like Lump, RH2, and Desert Trax. His debut with All Day I Dream was thus a natural next step and a fitting home fore his sound. Together with vocalist Idd Aziz, the two created an impassioned piece of sonic art, which brings about a state of hypnosis with its mantric vocals and beating percussion. Lost Desert also provided a standout remix of his own.

We got the chance to chat with Pippi Ciez more on the release and his long tenure in music. Read on below

First question: How did you and Idd Aziz meet, and come to working together? He’s quite a vocalist

Yeah he’s certainly an amazing talent. I actually came across Idd through KMLN on Instagram over 2 years back now and took the chance to just send him a message with some mid/downtempo tracks. We later met face to face in Birmingham England where we produced the album.

Take us into the world of ‘Riziki’—how was this track born and what was the writing process like? Does the song have any significance to you and Idd’s lives, or are there any notable inspirations behind it?

———
After talking to Idd it was pretty clear we was going to work together and with that spark I created 2 more tracks that week that I would hold on to tight until we met at the studio, those 2 tracks became Riziki & Wewe.

The production process started from a piano chord progression figuring out the emotional body that the track will hold, the piano then grew into the sound of a Kalimba which I feel has a better tonality to sit with an Afro drum rhythm. The Handsonic HPD20 is my go to tool for most drums appearing on the album, if I can’t record the real thing myself that is. 120bpm always feels a nice place to be but I really wanted pace and power in the roots of the record so a sustained bass progression accompanied by saturated shakers hitting every 16th beat brought the groove to life.

Forward a month later. On the first day of recording we managed to record half of the album which was 4 tracks and truth be told ‘Riziki’ was last. Having never heard the tracks before I was unsure if Idd would be on board. He took 3 minutes 51 seconds listening to the track and said to me ‘I have something for this let’s go’ …..he recorded the entire track in one take. I removed nothing it was simply perfect.

The track means so much to both of us Idd is asking for blessings as he is a good man his intentions are right and he is here completing his deeds set, so please give blessings. This is the perfect point in both of our lives where Riziki really means how we are feeling on this record. So yes a heavy significance. Inspirations I would have to say no on this one, it was more purely feeling it out from start to end and until now I never really thought about it but actually sounds unlike anything else out there.

What were some key pieces of hardware and software that went into the creation of ‘Riziki’?

———
Roland system 8 was the main piece of hardware for melodies on Riziki, I composed the rolling bass, arpeggios and tremolo pink noise on this synth.

The sustained bass was produced on the SH101, and again the Handsonic HPD20 for percussion. I also used the Kalimba from the HPD20 and reworked the audio in Logic Pro where the track really come to life and was prepared for the vocal recording.

You’ve spent most of your time in music as a music teacher. What led you down this path? Tell us more about how the ‘teaching bug’ bit you.

After leaving college at 19 I hunted for work in a music studio and lucky enough was accepted for the a youth project role helping under privileged children find there self through music keep them on track to a better life. I guess that’s where I caught the bug teaching what I love the most and watching them succeed is a phenomenal feeling.

And what’s changed of late that has brought you back into the production/live DJing realm?

432hz has been a journey in itself from when I first started experimenting I never really stopped after my 11.11 album back in 2016 I moved to India to teach. I was performing as my alias Walking With Kings quite heavily around Germany, India & Thailand at the time trying to run Inward Records, enjoy a new life all whilst working 6 days a week as a A Level Audio Engineer teacher. I worked with amazing artists in India a lot of which you will hear on my upcoming Ep on Do Not Sit, I just couldn’t seem to finalise anything although all the material was there but all this was crushing my creativity as Pippi Ciez and really took me 2 years (2019) to get settled back in England and focus on this sound that has been calling.

As Walking With Kings we play live and there isn’t a language for that feeling of performance I needed to bring that into Pippi Ciez in some sort of way as DJ’in for me was becoming a loss of feeling with the music and more crowd interaction. I needed to be lost in the set with the crowd. So I slowly started to build live sets and jam for hours daily, until finishing tracks and the set seem to align and I was ready to start performing again.

You seem like a very grounded individual. How do you maintain a sense of peace and sanity in today’s crazy world?

Thank you that’s a beautiful thing to say,

Start off by removing the TV from your house haha. I believe it was Mooji that said “once you grasp your true nature the more you are living in a field of peace and a calm mind”
That to me is understanding why your here, your mission what makes your heart skip a beat, go for that, be that and life will reward you for it. I think this is how I remain grounded & focused understanding there is work that needs to be done. Yoga, crystal work, prayer and meditation are frequent practices in my everyday life as well.

What makes All Day I Dream a fit for your music, and how did you come into contact with Lee and the label team?

I think with All Day I Dream its not just about the music but also what they stand for as a brand, as people, as a family. A lot of producers I respect hugely release consistently on ADID Lost Desert, Tim Green, Roy Rosenfeld and many more so I feel we share similarities in music choice. The label is perfect ground for the sound to reach an amazing community of similar minded beings producers, DJs and fellow dreamers
.

I first met Lost Desert at Studio 338 All Day I Dream party in London back in 2017, where I kept in contact with him having faith we would work together in the near future. He was supporting some remixes I had made in this time and after showing him Riziki 2 years later he was keen to do what he does best and create a beautiful remix. It was then once the package was complete shown to Lee and things just moved like a rocket. Credit to all the team involved.

Of corse
the
album from Idd and me will be due spring 2021
.
I have some music set to release over the next 6 months on mine, Sparrow & Barbossa’s label Inward Records 2 track Ep entitled ‘Tangerine’ and a solo Ep ‘Diourbe’ Do Not Sit will release a 5 track Ep November 13th, A remix for DSF out very soon, also me and Lost Desert are currently finalising our Ep and I’m of corse keen to release another gem on ADID so working closely with Lee. Will be a great time to finally see all the
behind
the scenes work out for the world to hear
.

My tuition series is in
development
so keep an eye out for that coming soon.

Thank you for the great questions and the opportunity of corse.

Thanks to everybody supporting #Riziki right now the support is just beautiful. If you haven’t already you can buy or stream here.