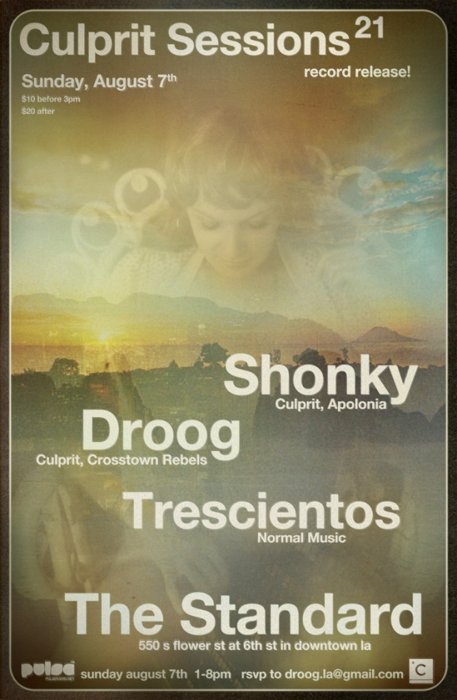 [Party] Culrpit continues their monthly Culprit Sessions rooftop parties at the Standard Hotel in Downtown, LA on August 7th with special guest Shonky. Supporting sets will be provided by Droog (the Culprit trio) & Trescientos. In addition to the usual excitement, this will also be the record release party for Culprit’s forthcoming 16th release by Shonky called “Oasis EP”. Although Purchase links are not yet available, the vinyl release is marked for July 26th and the digital on August 17th. It’s fitting that this summer season sees months of Culprit planning and scheming
come to fruition. A relationship that began almost four years ago, between
Culprit’s LA crew and Parisian native Shonky, has finally been realized, with the
mercurial Frenchman stepping up for his first full Culprit release, ‘Oasis’.

Shonky’s debut EP for the label bears a lot of his signature elements, mixed in with
a dash of patented Culprit funk. The title-track fits the label’s canon of soulful,
warm grooves and provides the inspiration for the rest of the EP. The two
companion songs ‘La Bestia’ and ‘Kwality’ took shape as label and artist
moulded the release together.

In ‘La Bestia’ Shonky serves up his take on the melodic, funky bassline sound
which Hot Natured pioneered for the label, with his own more euphoric twist.
‘Kwality’ channels Shonky’s love for classic 90’s US house. It works a dancefloor
but reflects LA’s sun-drenched vibe far more than darkened warehouse spaces.
The song recently set the roof ablaze at Culprit’s Sonar showcase.

An outgrowth of another trans-Atlantic relationship also sees Londoner jozif join
Culprit on this release, remixing ‘Oasis’. His remix has been a secret weapon in
Droog sets for the last few months, with its dramatic piano flourishes and jozif’s
own original guitar elements adding up to a modern take on a truly Balearic style.

It’s only fitting that jozif has just become a Space, Ibiza resident.
Through a “meeting of the minds” last year in London and playing together in
Miami and Sonar, a friendship between the label and jozif has been cemented
that, in typical Culprit symmetry, will see him go from remixing to contributing a
full release to the label later this year.