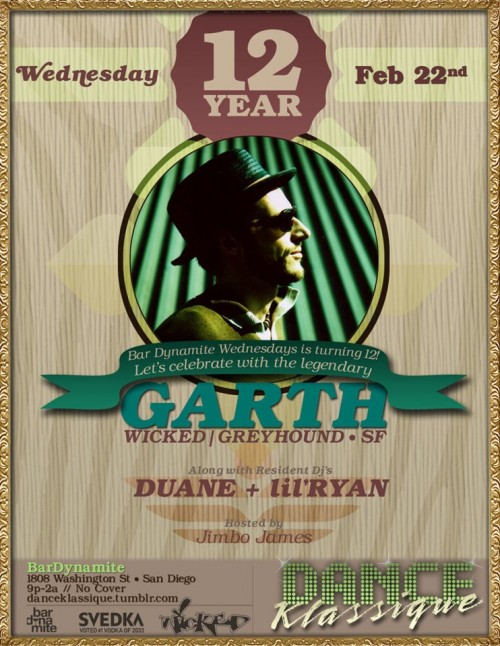 [Party] Set off of the beaten path in the Mission Hills area of San Diego for twelve years, Bar Dynamite Wednesdays came about when co-owners/DJ’s Ryan Bauer (Lil’ Ryan) and Duane Mellor (in collaboration with Phil Aye and Jon Wesley) decided to create a house music night that was far from main stream. According to Duane, he and Ryan “wanted to give house music lovers a place with character…more of a destination place.”

So far, their destination place has created 693 consecutive Wednesday night parties to date, showcasing deep house, as well as techno, soul, disco, re-edits and more. They have featured local and southern California DJ favorites, as well as talent from all over the country and world, such as Franck Roger, Justin Harris (The Freaks), DJ Sneak, Glenn Underground and Tom Middleton (UK), to name a few.

Additionally, plans to offer a mix CD compilation of DK Wednesdays are in the works, as well as a record label.
Latest tracks by Dance Klassique

To commemorate twelve years of successful events, Bar D is celebrating their anniversary on February 22, hosted by Jimbo James of OutLife and Lovelife. Firing up the decks with sets by resident DJ’s Andy Gomez, Duane and Lil Ryan, the night will complete with world-renowned DJ Garth (Wicked/Grayhound –SF).