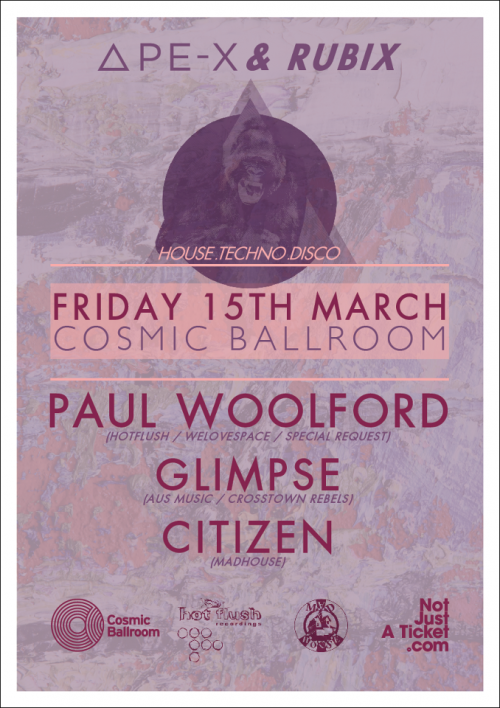 Newcastle has all the right ingredients for a party city: great people, great bars and clubs as well as a fantastically unique culture. It may be a surprise that deep house and tech lovers had limited choices just five years ago when Gabriel Day hosted the city’s first Ape-X party at the legendary Cosmic Ballroom.

Ape-X’s booking have been getting gradually more impressive and last month’s 5 th birthday celebrations saw Ȃme accompanied by Detroit Swindle and Trevino. The monthly party is continuing in March by teaming up with sister night Rubix to host the return of favourite Paul Woolford accompanied by Glimpse and Citizen.

Woolford is one the most esteemed producers in the industry and his variance between genres has seen him reach an almost mythical status – most recently he has been working on records under the Special Request alias inspired by early 90s pirate radio. An air of excitement descends over any city Woolford is playing in for weeks leading up to the event and he hasn’t disappointed yet.

Glimpse will be playing his 909 set bringing something different to the main room. The Crosstown Rebels and Hypercolour affiliate has gained recognition as a producer of melodic tech of the highest order. Glimpse’s productions with the late Martin Dawson are amongst his finest work and have gained particular attention recently following the latter’s untimely death.

Glimpse’s series of releases under the alias of Dense & Pika alongside Hypercolour’s Alex Jones in 2011 saw the pair keep their identity a complete secret. This saw a refreshing desire to move away from the heavy branding placed on artists and each release was a huge success. Having now revealed their identities, the duo look to work together more in 2013 which has been met with an air of excitement in the industry. We can’t wait.

Playing in room two is Citizen – undoubtedly one of the most exciting acts to emerge relatively recently. His forthcoming Trax EP shows the Madtech man is a real player in producing new and original music as well as a truly gifted remix specialist. Citizen’s live sets pack a rare groove with disjointed samples never straying too far from the deeper confines of house: his sound is set to lend itself perfectly to the smaller room 2.

It would appear that Ape-X has delivered in its task to find a killer line-up to follow up from a monumental 5th birthday celebration.