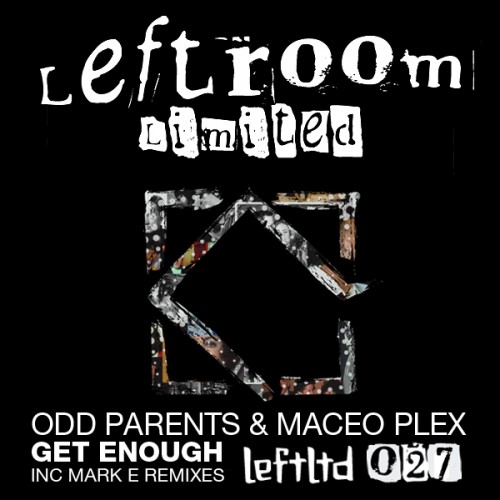 [Release] Since its inception in 2005, Leftroom Records has been a hot bed of experimental sounds. The label has been a place where artists, both new and established, have been able to comfortably step outside of the box and display a different sound than their audience is used to. Leftroom’s sub-label, Leftroom Limited, showcases a much more eclectic sound, and this is where newcomers Odd Parents team up with non other than Maceo Plex to release Get Enough.

Odd Parents have been part of  Maceo’s Ellum Audio family for a while now, and it was their debut release on the label, Fame, that enticed the famed producer to jump into the studio with them.

“Get Enough” is nothing short of a  dance floor bomb. Hard-hitting, heavy drums, a Maceo-style arpeggiated bassline, and hypnotic vocals all come together to make for a track destined for peak hour play in the months to come.

Ghostly International artist Mark E cooks up a couple remixes of the single, each one getting a little darker. His first take on the track is a much mellower reimagining. Stripping away the heavy Maceo Plex influence, he focuses instead on a set of wonky synths  to move the track  along smoothly. His Future Doom mix is an intense, dark experience. A heavy build-up consisting of piano riffs, spreading synths, vocal snippets, tribal drums, and countless other layers of sound make it almost too much to handle. A complete juxtaposition of the original track, this Mark E remix is the epitome of after-after-hours, when you feel you just can’t dance anymore but the music, among various other things, just won’t let you stop.

“Get Enough” and its accompanying remixes are examples of the high quality music that Leftroom Ltd. has come to be known for and I look forward to having any version of it warm me up throughout winter dance sessions.