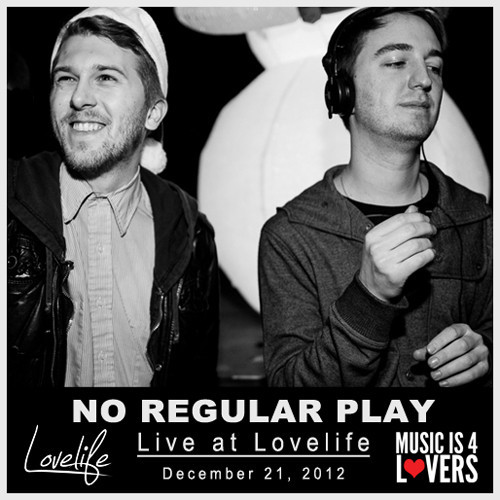 [Mix] On December 21st, the supposed end of the world, the night of a huge energy shift, magic hit San Diego’s Lovelife when No Regular Play came riding into town. From Lovelife‘s own Jon Dadon setting the vibe off SEXY with some soulful deep to the vibrating build up with the sultry and pulsating beats of Riff Raff‘s Spacebyrdz & Justin Baulé, the stage was set perfect for the showcase of seriously sublime sounds from the immensely talented Greg Paulus and Nick DeBruyn aka No Regular Play. Their impressive live show, which features Paulus’ inimitable trumpet and vocals alongside DeBruyn’s masterful manipulation of the rhythm and soundscapes bridges the gap between the indie arena and the heartbeat of the dancefloor. It was truly something spectacular. It was too blissful and beautiful for words to ever encompass. Sulty, sexy, sweetly seductive and instrumentally elevating … the boys from NRP have that instrumental seduction down to perfection.  Lucky for us, Lovelife was smart enough to record all the magic that night …