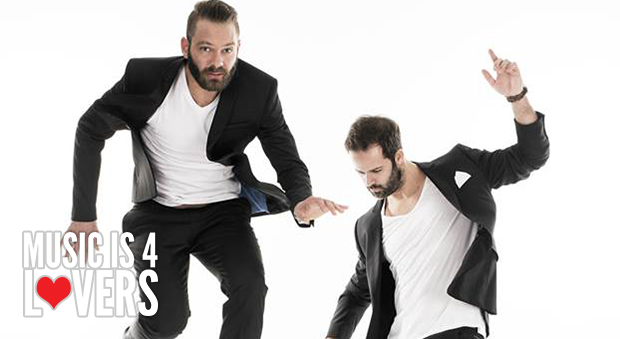 If you’ve been paying attention to the charts lately you’d notice rapidly climbing up the ranks is Zürich-based high energy duo — Fat Sushi. Their latest release, Warehouse EP on Suara (supported by Nicole Moudaber, Maya Jane Coles, and Eats Everything), features b-side track The Groove which recently nailed the #2 spot on Beatport’s Tech House Top 100. You can also find the duo’s tracks on other Mi4L fave labels like OFF Recordings, Stil vor Talent, and Kittball.

Fat Sushi is on their way to the upper echelon of house music alongside Swiss comrades Adriatique and Animal Trainer; and if you’re not familiar, wrap your lips around this seared mixture of house music the duo has put together for our 78th Lovecast Episode!

Ralph Fat & Dan Sushi – How did it start?

Switzerland is a small country as you might know. Both being involved with electronic music since over a decade–and being about the same age it was kinda obvious that sooner or later our paths would be crossing. But then again, it needed a mutual friend of ours who pointed out that we should work together. We’ve locked ourselves in the studio–and from the first moments, we both had the feeling that this collaboration might be working out rather well…

Adriatique and Animal Trainer have been lighting up the sound waves – Is Fat Sushi the next big thing to come out of Zürich? Tell us about your relationship with those guys.

We’re really happy how it all goes at the moment: people seem to dig our music. It’s motivating what happened the last few months, especially when we think about that we joined forces not even 1,5 years ago. Since then, our plan has been to create and play the music we love. So far the plan works well and time will tell if Fat Sushi is going to be– as you say–the ‘next big thing’ to come out of Zürich after Adriatique and Animal Trainer.

As for our relationship with them: We got to know the Animal Trainer guys when joining the same management and releasing our ‘Perfect Timing EP’ on their brilliant Hive Audio imprint. They’re both great fun guys who know their business and helped to build a great scene here in Zurich! Adriatique are doing a tremendous job too–but our ways only kris-krossed once at Sonar in Barcelona at the Culprit Showcase.

You’ve released jams on Suara, Stil vor Talent, OFF, Kittball, and Animal Trainer’s label Hive Audio – Any fresh labels you’re releasing on in 2015 that you’re especially excited about? What label catalogue do you dream to be apart of?

We’re currently working on the follow-up EP’s on the labels you’ve mentioned–as we were really happy how they worked with us. That should keep us busy for a little over the upcoming weeks… There’s no big masterplan though for 2015, except that we might start doing some selected remixes and continue to play and produce music we love. Okay, and we might pitch a record or two to labels like dirtybird or Hot Creations to see if they like our sound too…

Currently your latest release on Suara is #2 on Beatport’s Tech House chart – How does it feel to be sitting up there next to heavy hitting artists like Dixon, Tale Of Us, and Recondite?

Oh that’s definitely nice to see! We play a lot of their tracks and it’s very motivating. One more reason to keep hitting the studio, there’s no reason to rest on our laurels… if there are any at all 😉

What has been a highlight moment for your young duo career?

Probably the feedback we’ve got on our latest EP on Suara? Hm… we feel like 1,5 years are not long enough to pick a highlight really–it seems like we’ve started yesterday only!

What’s your go-to track right now during your DJ sets?

Tell about your mix…

As we both have a pretty wide musical influence, we always try to pack both, our housey and our techy side, in a mix. Starting smoothly, speeding up a little after the first quarter and finshing up playing a little techy and the end. Hope you guys enjoy it!

Havana Coke! And sometimes there is a little room for water…