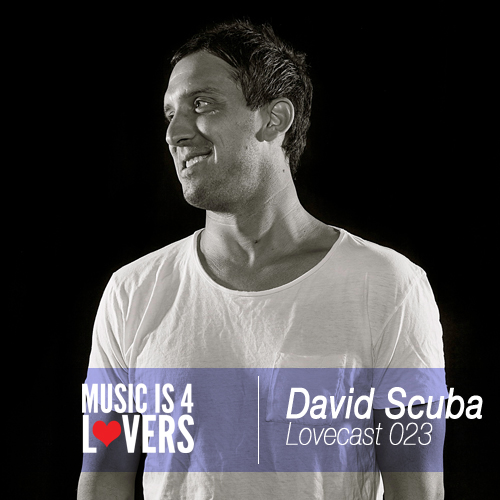 Raised on a diet of underground house music in the legendary confines of New York’s Twilo during the late 1990s, David Scuba is now coming into his own. At the same time as holding down an arduous day job, he has been an influential A&R for labels like Timeless Groove and Real Music Deal overseeing releases from numerous international names in the past. Now, though, his closest ties lie with the legendary MR C and the Superfreq label they run together.

As well as producing his own solo tracks and remixes for the Superfreq label, he’s also recently released an EP on Riff Raff alongside Mikael Stravöstand, much to the delight of fans including Magda, and has teamed up with Dance Spirit to great effect.  Both of David’s remix’s of Mr.C’s I’ve Gonna Give You Some, solo & with Dance spirit, have had first class DJ reactions across the board & have been crushing dance floors.

David is a co-owner of Superfreq with Mr.C and Luke vB where he holds down resident DJ duties on a regular basis. As a DJ his talents spread much further, though, taking in events across the globe (from WMC to BPM to DEMF, Resolute New York to Superfreq London) playing alongside the likes of Carl Cox, Nic Fanciulli and Layo & Bushwacka!

On top of this, David’s responsible for promotion, staffing and scouting new locations for SuperfreqLA events. The parties he’s been throwing with Mr.C have been the talking point of the LA underground.

The future is bright for this ever rising star, with more remixes coming on the first few releases of the rejuvenated Superfreq imprint, DJ tours in the pipeline and collabs with the likes of DJ Pierre and Silky penciled in. As such, the world should watch out for the ever-essential talents of David Scuba.

I grew up outside of Philly and from the age 20-28 I live in and around NYC. So I learned a lot about life out in the most amazing city in the world, New York City. But now I live in Los Angeles. Another city I’ve grown to love.

There really wasn’t a scene, the first party I went to was Buzz in Washington DC, and then shortly after Twilo and several other clubs. So my first experience in the scene was amazing. I was shown the ropes by friends who worked or promoted for the clubs. I can’t think of a better way to be introduced to the music standing in the DJ booth at Twilo next to Sasha & Digweed, Carl Cox, Danny Howells and the list goes on..

LA is on Fire musically, but the only thing we are missing is a few more smaller clubs that are musically driven…

Honestly it wasn’t until this year when Superfreq was re-launched, and I was asked to be a partner. I knew I loved to produce music, but the label solidified it’s here to stay..

It all changed after I experienced Superfreq London , and played the after hours B2B Mr.C for Jadded at Cable Club (which was recently was forced to close). This changed everything seeing how the music is such a huge part of the culture. People are not all on Drugs they love the music and love to dance.

We have an amazing little crew and extended family. We all are really goofy and like to joke around. I might be the biggest goof-ball out of everyone.

How has being a part of this awesome crew shaped you into who you are today?

I’m not sure yet , but I think it’s all taken shape as we speak. All I know is that I need to be at the top of my game when your part of crew of really talented artists.

What advice would you give to aspiring producers ?

Make music that you feel, and don’t try to be or sound like other artist. Yes some artist might give you inspiration, but maintain your own identity..

Jam on it – Newcleus. I use to break dance as a kid and think I listen to this track about 500times

I typically listen to Funk, Jazz, Reggae, and bunch of different Jam Bands

Yeah I have ton of cool shit going on in the next few months… I made a killer deep house Remix of “Open up ” with Dance Spirit, the first single off of Mr.C’s smell the coffee album. Other mixes are by Just-Be ( Mathew Bushwaker), Inxec ,and Jordan Leib. I was asked to remix a single from the Detriot Grand Pubah’s along side some bad ass techno artist..
Some really exciting gigs…
June playing Miami & Tampa
June 30th – Grand Park Event in LA will be great to play a deeper side of my sound..
New York is in the works…
It looks like Ecuador is going to also happen before the end of the summer…
Back to London for another little tour late September…

I use Ableton and mix down everything in logic…

10 out of 12 tracks on the mix are original tracks i produced or co-produced with Dance Spirit or Mikael Strovastrand. It was really weird putting together a mix with your own tunes. It’s much easier to find the right tracks and get emotions out of music that is not filled with your own emotions.