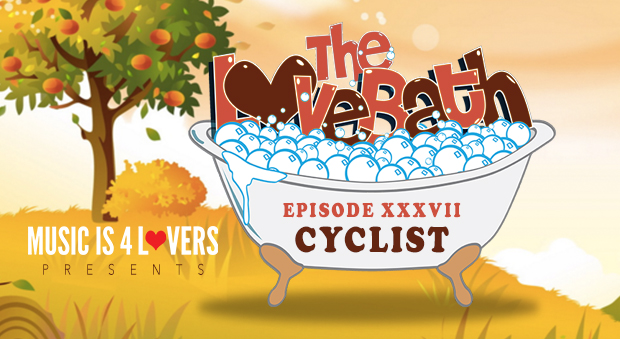 This week we head north of the border to chill with our Toronto-based disco pal, Mark Penner, aka Cyclist. Mark is what you’d call a “jack of all trades” when it comes to music…the man does it all. From his groovy and cosmic re-edits and original productions, to playing guitar and organizing the live disco band, Tush, to co-running the MANI/PEDI record label or promoting and DJing a slew of parties across the country… the guy truly is a luminary of Canada’s modern disco scene.

When not occupied by establishing any one of his countless ventures, Cyclist is consumed by his passion for analogue synths and digging for records – an obsession which, while steeped in the past, influences a sound that is very much modern – a juxtaposition that makes Cyclist the obsessive, disco-discerning tastemaker he is.

We’re very excited to host Cyclist on The Lovebath and are absolutely buzzing over the eclectic mix he’s prepared for us. Find the grooves below and dig into our standard interview while you’re at it.

You co-run a label along side American producer, Karl Kling. What was the inspiration for launching the label and whats next for the MANI/PEDI camp?
We started MANI/PEDI in 2014 as an outlet for our own stranger cosmic disco music we had been making. We expanded it to release deeper disco edits from artists we dig and we’re currently working on Waxing Vol.2. Look for that in 2018!

You’re based in Toronto, and appear to be quite active in the local DJ/Party scene. Your event, Beam Me Up! has established itself as a premiere event in town and you recently launched a new event, Connection. Whats the difference between these two events and what was the inspiration there?
Beam Me Up is a straight up disco party. We play all styles of disco and edits but don’t let things get too house-y…. the venue and it’s clientele really prefer the old school sound. Connection is a spin off where we explore the connection between disco and house. From old school electro disco like Connie Case ‎– “Get Down” to more modern disco infused house like Soundstream – “Inferno.”

In addition to your DJing, producing, promoting and the record label, you also spearhead a live disco outfit called Tush. Fill us in on this project and whats in store for the group in the coming months?
I started Tush with producers/DJs James Harris (Hemingway) and Jamie Kidd as well as singer Kamila Apong. We mainly do covers, songs like “Southern Freeze” by Freeze and “Keep The Fire Burning” by Gwen McCrae. We’ve started to write originals and are currently working on finishing our first recording. Hoping for an early 2018 release!

Anything else you care to share? Upcoming releases? Remixes? Gigs? Tours?
Keep an eye on Beam Me Up’s Soundcloud for live mixes from our parties as well as guest mixes. We’re also putting on our first party in Montreal, Sept. 30th at Groove Nation.

Number one sure-fire party starter in your dj bag currently?
The Silver Rider ‎– Special Edition Volume Four. Not just buttering you up, haha! “Charlie” gets people moving every time! Also, Baggy Leggins ‎– Expensive Sheeeeet 7″. No idea what the deal with this artist is. He or she has 10 soundcloud followers and released this kickass 7″, both sides are fire.