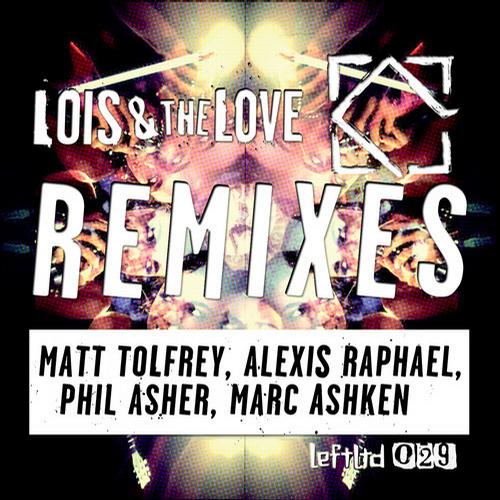 Never afraid of pushing boundaries, the forward thinking Leftroom camp indulge their eclectic side with a with a remix package of an exciting London based band, Lois & The Love. Released in late 2012, ‘Dark Serenade/ Rabbit Hole’ was the band’s debut release and picked up plaudits from key tastemakers outlets, including The Guardian and Clash Music, who drew comparisons to icons including PJ Harvey, Nick Cave and Janis Joplin. Providing remixes are a crop of seasoned producers, delivering a variety of interpretations…

Up first label boss Matt Tolfrey’s dubbed out remix hones in on a single vocal phrase, whilst using subtle melodies and modulated effects to create a dark yet dreamy atmosphere. Rising London producer/ DJ Alexis Raphael imparts what is fast becoming his trademark deep house spin on ‘Dark Serenade’ turning in a full bodied house affair that has already received Radio 1 plays courtesy of B. Traits. House music maestro Phil Asher turns in a jaunty, Afro beat-tinged take on ‘Rabbit Hole’ that showcases lead singer Lois Winstone’s sassy vocal in all its glory. Inspired by LCD Soundsystem, Asher’s mix keeps it rocky but will certainly resonate with the dance floor. Rounding off the package MarcAshken provides a typically skewed interpretation on the mix of ‘Dark Serenade’ that retains the drama and atmosphere of the original whilst imparting sharp processing on its sonic make up. Asken’s mix builds over its 3 and half minute before launching into full flow in the final third. An interesting remix package of an exciting new band, delivered from one of house music’s most consistent labels.