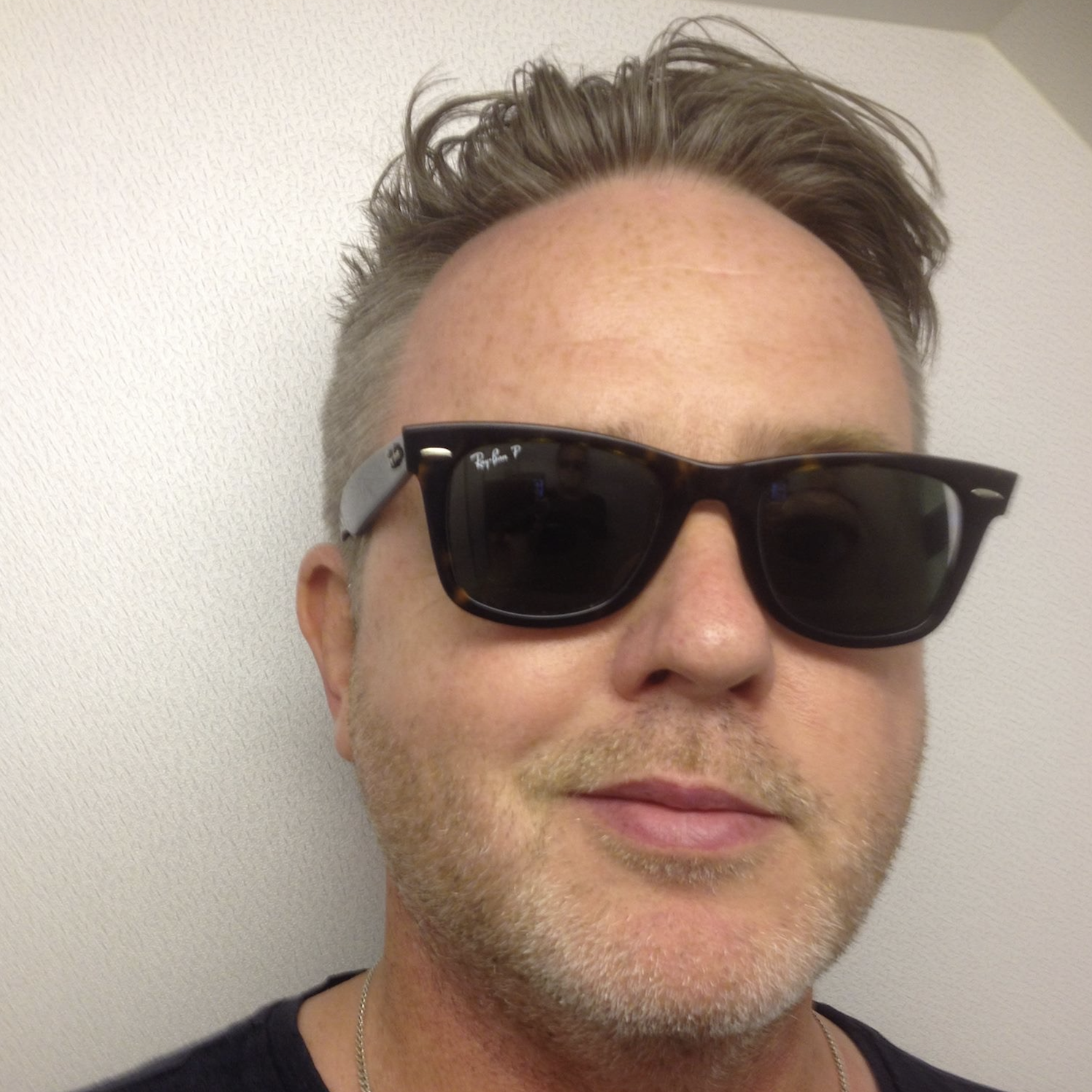 Linear B has been involved in the UK techno scene for the last 15 years, this London-based artist has gained support and praise from the likes of  Laurent Garnier, Truncate and Mr Ties over the years, with his latest offering ‘Our Eva’ showcasing three stellar cuts on his recently launched Rainbow Tipi imprint.

We caught up with Linear B to hear about his exciting new EP on his Rainbow Tipi imprint, the story behind the label, early days in the progressive house scene, and upcoming projects.

Where are you and how are things there?

I have recently moved from south east London with my partner from a home I had lived in for nearly 20 years but we currently live in West Malling in Kent UK in the countryside surrounded by fields and farmlands. It’s so picturesque a far cry from the suburbs of South London, there’s loads of country walks around so we are very fortunate.

I also have an acre of land with an allotment where we grow food and keep chickens (not for eating) which came with the house as the previous owners were moving too far away to transport them to their new home. Downside our rescue cat keeps bringing mice and other rodents home to play with and he tried to bring a rabbit through the cat flap the other day, we managed to get the poor thing off him and release it in the field and I’m currently monitoring him before he’s allowed in.

The progressive scene was one of the many types of music that had an influence on me, I grew up listening to a lot of different music in my family home. I was born in Belfast Northern Ireland so we had a lot of Irish folk/rock and pop music in our house, my mum and dad always had the HiFi on there was always singing and dancing in our home, my older sister was into soul and jazz funk and taught me how to dance like the soul boys and girls did in my early teens I got into early hip hop.

I used to breakdance and used to do a lot of graffiti art, then electro came along which eventually lead to early house/techno/garage, my parents moved into a new area and ran an English pub where I met a load of new mates, we were all about 17 in 1988 we started going to early house/rave club nights in London like spectrum, shoom, promised land, clink st, rip, Astoria, Brixton academy, where I saw acts like Kym Mazelle, Adeva, Paris Grey, Marshall Jefferson, 10 city, Derrick May, Kevin Saunderson, Frankie Knuckle, Todd Terry.

Around that time my mate nick passed his test, bought a car and became the designated driver and used to take us to all the warehouse raves and M25 parties, back then a lot of the DJs would play everything from house to garage, techno even synth-pop, Balearic and Italian disco. I got seriously into deep US house and garage I would buy all types of music and started djing with my mates, we would put on small parties in our home town or take a generator and the decks and set up down the coast at Dungeness in Kent, putting on free parties. There have been so many influences over the years, we saw the rise of drum and bass/jungle/UK garage from the very beginnings, I feel truly blessed to experience the vibes in the Uk and London at that time.

Your imprint, Rainbow Tipi is relatively new and I’ve only managed to find a few releases to your name to date – what’s your history in terms of starting production and setting the label up?

I had an early release with Orient records in 2008 called “shaker shaker” with my mate Ben, we did ok, it got amazing reviews but we weren’t really focused or driven and were struggling to find our sound, Ben eventually gave up on the music because he had a young family and couldn’t commit.

I carried on writing and producing alone before eventually my good friend John Liken who I was djing with and putting on club nights in London introduced me to his brother Tim ( Tim Deluxe ) Tim helped me with my productions and gave me loads of tips and pointers….and also which football team I should support ( thanks Tim aka AFC).

I eventually got signed to Darren Emerson’s Detone records via Tim as he offered to send my tracks to Darren, anyways Darren signed a couple of tracks which spurred me on into a mad writing frenzy, I was sending out loads of music to labels and not getting any responses, so I had loads of tracks sitting on hard drives not seeing the light of day so I thought why not do it yourself, so there you go. At about at that time we went to see Neil Young in Hyde Park, Rainbow tipi is taken from a song by Neil Young called “peace trail” check out the words they kinda clicked with how frustrated I was feeling with the music industry, plus anyway I don’t know where I fit in with a lot of labels so I’m gonna keep releasing tracks under the Rainbow Tipi sky.

You’ve had a disparate group of DJs supporting your music already, from Laurent Garnier through to Truncate and Mr Ties – what is it about your stuff that you think appeals to such a broad range of artists?

The response has been amazing, to read the reviews from all my peers is unbelievable, I’m am very humbled, I really don’t know what appeals to the DJs, I guess I have a passion for music and a lot of influences, my style is a mish-mash of all of that and I always try to do something different from the thing I did before when starting a new track, plus there’s a lot of edits.

Do you ever have DJs in mind when you’re writing in the studio?

In short no, sorry I don’t want to seem arrogant here, I write whatever I’m vibing on whether it’s a new bit of kit or a thought, feeling, idea or words I’ve written down. I write a lot of words and sing and tinker with synths and edit the lot and work them into tracks, I’m currently learning modular synths which I don’t fully understand, I usually end up with spaghetti mess with a little bleep coming out randomly, but what a bleep.

Your current release, ‘Our Eva’ is a tribute to your late mother which must have been a difficult track to write. What was your approach there?

It was the third anniversary of my mums passing and I really wanted to write an emotive progressive type track with words as a tribute but I really couldn’t write words to express what I was feeling so I put my heart and soul into the musical element, I’m sure she would be chuffed, she was always encouraging me with my djing and making music, she would always sit down to listen to new tracks I had written and gave me feedback which was always positive. Her name was Eva, they say in Northern Ireland “our” before a family member’s name as a term of endearment and so you wouldn’t get confused with someone else, “Our Eva” seems a perfect track name.

You don’t seem to shy away from challenges in your production for this EP in general. The aforementioned track and it’s emotional considerations, ‘Blue Angel’ features your own poetry and ’San Fran Dave’ are you battling your Prophet 8 synth – do you put any truck in the idea that the best music comes out of difficult situations?

When I went to mix down “Blue angel” it was an instrument track with some modular parts, I was working in my good friend Justin’s studio bouncing down some keyboard parts when I got a call from a friend that a girl I knew called Holly had passed away it was all very tragic, I am a recovering addict and had been part of a recovery group that had been helping her with some personal problems she was going through, I was devastated as I had only seen her a few days before hand,  but I had managed to give her a hug and told her we love her and come back to the group.

I had written some words a few days before the mixdown session which I decided to include hence the poetry we, unfortunately left the mic open so when the track ends you can hear me say ‘that’s it’ as for the ‘San Fran Dave” and the prophet 08 saga I was not using the synth because I hated the rotary dials due the potentiometer problems but I managed to get the main riff out of it using the sequence mode. I actually think this is the strongest track on this EP, it was inspired by a trip to Liverpool cathedral where the choir was rehearsing and I managed to record some snippets to use and layers of samples with my voice as well, sorry for the long-winded answer but I grab inspiration from all sources sometimes, difficult sometimes as well as joyous as I guess you can gather and being a troubled soul helps too.

What’s next for the label and yourself?

I have a series of eight Eps due out this year with an album due at the end of the year which I’m really excited about, we have an amazing digital artist onboard who creates Fantastic abstract works for the cover art. The current releases are taken from 4 albums I’ve written over the last few years, so its a case of showcasing some of the tracks from them, I would like to get everything set up for the releases and maybe start to do some live performances as a lot of my music includes vocals of some sort, maybe even do some djing again but my main focus to grow as an artist, producer, live performer.

Linear B ‘Our Eva’ EP is out now on Rainbow Tipi.