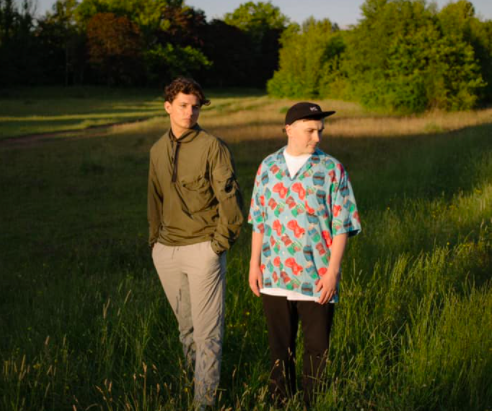 [Interview] Macka & Lowree discuss new ‘This Is It’ EP

Contributing WriterAugust 6, 2021
INTERVIEWSPREMIERESUNCATEGORIZED0 Comments 0
Macka & Lowree are two emerging artists from Scotland and after several productions released into the world as well as experiences of rocking the famed Sub Club in Glasgow through to supporting high-profile DJs such as Denis Sulta, the pair are now sharing white-label’d ‘This Is It’. We spoke exclusively with them about the current moment, the new music and whats next for the dynamic duo. ‘This Is It’ is now available via Bandcamp How are you both today, what have you been doing recently? Macka: Yeah we are grand thank you! Things are opening up again and we’re both excited to share what we’ve been up to the past year and a half. Lowree: Yeah pretty much other than getting everything ready for this EP release, we have both just been working on our own music 24/7 and getting prepared/staying hopeful for the clubs reopening in Scotland soon. Tell us about your route into dance music and how you both got to what you are doing right now? Macka: This is a great story actually. We were both playing and doing music for several years but together we decided to start DJing together in an afterparty at the start of 2017, we played for so long. Lowree: Haha, yeah around this time there was a night where we went back to back for 8+ hours and we haven’t stopped playing and making music together since. Later that year we started our own collective/night where we landed our first residency and threw numerous parties as a group. Macka: We have also been playing parties together non stop all over the country and had various joint releases along the way. You could almost consider us a joint alias, which brings us here! Since lockdown has began to relax, have you guys partied anywhere at all? Lowree: We’ve both played socially distanced sets recently where everyone is seated at tables but nothing like what is allowed down South at the moment. Macka: Yeah, I’d say that and other than our living rooms and in the studio as well. Lockdown still prohibits parties in Scotland until August – so we’re raring to get going. Do you want things to be in anyway different after the pandemic? Smaller parties, more local DJs, more egalitarian entry prices and DJ fees – let us know what you think? Lowree: Of course with everything that has come during and from the pandemic I’d say we both think there should definitely be more egalitarian entry prices and fees. There also needs to be more equally diverse line-ups overall for parties both large and small. What inspired or influenced the ’This Is It’ EP? Macka: Another great story, we were recording a radio show and we had this gut feeling that we needed to go to the studio and make a track. 7 hours later at 5am, we had ‘This Is It’. Lowree: We spent ages that night specifically designing the key synth sound which could pay homage to the string sound in ‘Strings of Life’. I remember it was a similar moment where for the whole progress of making the track we didn’t move from the studio space until that 5am mark. How did you link up with Scott Bathgate & Frankie Elyse for the release? Macka: Scott and Frankie are good friends of ours that we’ve known forever. Incredibly talented artists and we wanted to give them the platform to showcase that. We’ve been blown away by their inputs, they’re both a massive talent. The process of production, do you always approach each track the same way or is it a different approach every time? Lowree: When we’re working together it’s definitely a different approach every-time, we always start a track when it feels right, sometimes using elements completely in the box and sometimes experimenting/making use of hardware we have. No matter what, there is always some sort of feeling I want to portray when making music. Macka: Yeah, most of the time when I’m working on a project there’s an energy that I’m trying to create for the dance floor. This release was focused on summer euphoric club tracks aiming to bring memories of pre-pandemic parties flooding back. Now we’re looking to be finally over the worst of lockdowns ect (we hope!) – what goals and aspirations do you have for the future? Macka & Lowree: We have a lot of nights to catch up on due to the pandemic. We both just want to keep doing what we’re doing and keep making the music we love no matter what! Please share with us one track which you would play to ’Save the dancefloor’!  Macka: ‘Mark Knight – Second Story’. Never fails to go off in any club setting. Lowree: Frits Wentink – Friends. At this current second, I would pick this and for sure a corona release to remember as well!