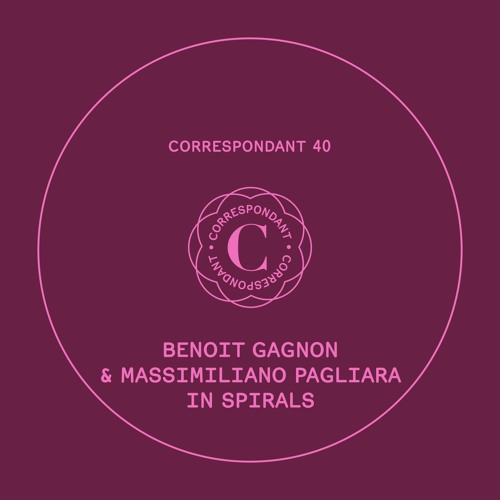 Spiral into an upbeat groove with the latest release from Italian nu-disco king Massimilliano Pagliara, and emerging producer Benoit Gagnon. Releasing ‘In Spirals‘ on Jennifer Cardini’s Correspondant imprint, this brilliant collaboration came about when Benoit submitted tracks over to Massimilliano simply to obtain feedback.  Massimilliano was so impressed, that he felt compelled to add his own eclectic spin on the mix, resulting in Correspondant 40.

Reminiscent of some of our favorite 80’s tunes, this four-track EP radiates that lively, funk-factor and house-inspired disco vibes.  The title track, ‘In Spirals’, is enriched with funky guitar riffs, groovy basslines and bubbly tech sounds. ‘Agamous’ is infused with strong claps, subtle vocals and laced with elements of acid house, while ‘Go South’ is beautifully synthed-out with drum kicks, bleeps and and melodic twists.  ‘Don’t Push Me’ continues the delightful synth melodies, with uplifting grooves and percussion saturated, swirly beats.

So turn it up, jam out, and channel your inner disco child!