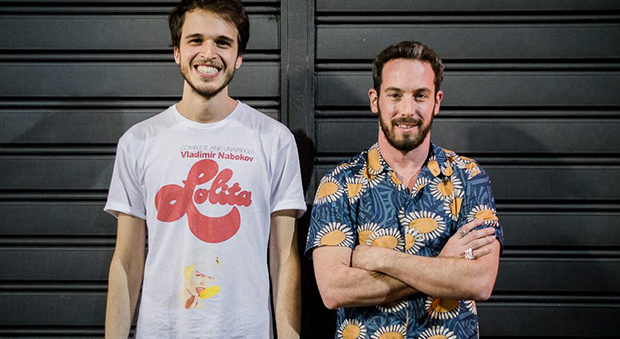 Amidst the growing dance music scene in Brazil that orbits around São Paulo and Rio De Janeiro – is a duo composed of two music aficionados who, for novel choices of words, walk on the wild side. For almost five years Selvagem has risen to become one of the most sought after DJ duos working the decks, known for their versatility as selectors. Whether it’s a nod to the classic era of Samba and Brazilian disco (60’s/70’s) or a dip into some straight jacking 90’s House, Millos Kaiser and Trepanado (Augusto Olivani) blur all lines seamlessly when you hear them play. In the vibrant scene of São Paulo on a late night these two former journalists met and bonded over having no boundaries really at all when it comes to sharing grooves. We recently got the scoop on their journey, parties and projects they’ve been cooking up in Brazil, including a very playful mix for those long summer days.

1. (of an animal or force of nature) wild, savage

What have you guys been up lately in Sao Paulo?
We’ve been working hard on different projects, not only concerning our monthly parties (both in Rio and Sao Paulo), but also getting more music done and released. We have three releases lined-up for the second half of 2016 and we are setting up our own label, plus following-up on other projects that we’ll keep under the covers for the moment. We’re always trying to take it to the next level, whatever way that is. Anyway…it’s rewarding to put your efforts into something you strive for, which for us is to spread music we believe in.

How has the scene grown since you started playing together and what is so special about it?
The Sao Paulo scene is pretty healthy at the moment, especially when it comes to the parties, because the club scene has been stagnated for the past 6 years. You have different labels, each with their own style, music & devoted crowd, plus party people that can be seen circulating in any of them. The level of production has increased, people have a good experience overall and they don’t have the hassle of being in a typical club (with bouncers and random annoying people). The block party thing, doing free parties in downtown squares, is something we became known for and was big for a solid three years, has slowed down mostly because of the rising conservative wave which has affected all of us. You gotta keep it underground now, meaning: avoid catching the attention of the public eye and keep it loyal with your posse. Selvage began as a free party and that totally affects us in every way, even with our approach to DJing. We doubt we will ever stop doing free parties in the streets, even if they are infrequent. The city’s next mayor could even affect us, so we never truly know.

By the way, how did you two meet?
We met through our mutual friend Kiko Costato, back when we were only journalists and dilettante DJs. At the time we had no clue what was about to happen, but we quickly got along well on a personal level, plus there was a musical connection between the two of us that was flagrant. So we became friends basically at the same time as Selvagem started, four-and-a-half years ago.

Do you come from musical backgrounds?
There’s a five year difference between us, so as young adults Augusto (Trepanado) was into indie rock and Millos had phases in all sorts of rock, but mostly punk and then, well…emo. Augusto says that as a teenager he was interested in everything between heavy metal and disco, between Slayer and Chic. Millos sang and played guitar in hardcore and indie bands, but his favorite groups, thanks to his parents taste, were always Talking Heads and The B-52’s. He only got hooked on dance and electronic music over the last decade, while trying MDMA for the first time in Benicassim, Spain circa 2007.

What Brazilian artists and other cultural elements would you say influence Selvagem?
That’s a tricky question, since we started correlating Selvagem with Brazilian culture after we got it going. We are clearly inspired by the music produced from early 70’s to late 80’s, from funk, psychedelia, samba-rock, disco, boogie, new wave, post-punk, funk carioca (or favela beats), house and all things that sounds weird and strange. The candomble culture also has an impact on our sound and we are very interested in some concepts spread by artists like Helio Oiticica. “Be an outcast, be a hero”.

Is there a particularly party you’ve played (in recent months) that stands out above the rest?
Our carnival party in Rio is always insane, but this year set the record for craziest party there ever, you can ask anybody who’s been. 4,000 people showed up and we played for 11 hours. Another contender was the boat party in early 2016 at Mareh Festival in Boipeba – forever dubbed “the acid boat” – it had the best vibe, the boat anchored off a sandbar not far from the beach and people were dancing and diving on LSD.

When it comes to partying which of you is more selvagem (wild/savage)?
Most of the time we behave ourselves because we are not very keen on being the “party hard” kind of DJs that behave erratically, and since we usually play long sets we need to keep our energy focused. But still… don’t tempt us!

We really love your edits and your work with Carrot Green, will you be releasing anything in the near future we should know about?
Thank you! And yes, there’s a couple of tracks with a house feel that we did together we will release later this year, plus a cool edit we are just finding a home for. There’s more stuff we’re working on and it’s great how this collaboration has evolved. We never know what a track is going to sound like when we hit the studio.

We also heard about your monthly party up in Rio de Janeiro, what’s that all about?
It’s funny that we became known in Rio for our night parties, since Rio is all about the day, the sun, the beaches and all the tanned athletic bodies. Since we can’t compete with all this, it’s better to stick to the nightlife, and to be honest we are having a lot of fun at our parties there for the past year and a half. Recently we hosted Daniele Baldelli and it was just beyond this world, the atmosphere was amazing, it was a really intense party. It’s not unusual for them to go past eight in the morning and still have a good crowd going for it.

What does the future look like for Selvagem right now? Are you planning to tour North America anytime soon?
We hope so, since our first international gigs were in the US back in 2013 (NY and Philadelphia), but nobody has invited us back yet haha! For the past couple of years we’ve been touring Europe. Last year we had a 50-day run, a 20-gig tour by ourselves and we are getting more invites to go over there. We’ve just returned from a three-week tour playing in Leeds, Manchester, Dundee, Brussels, Paris, Rennes, Venice, London and Lyon. The future looks bright; we’re accomplishing stuff and doing our own thing, which feels really good. We’re focused and in this for the long run.