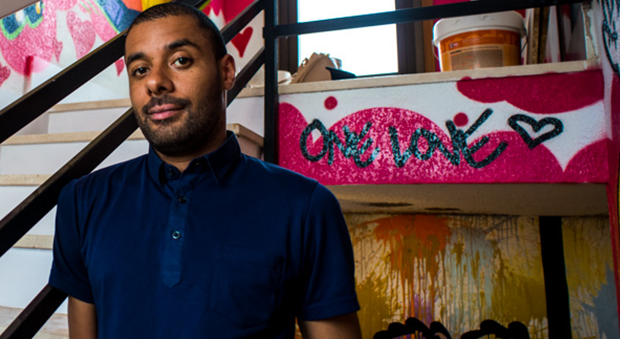 Combining a love for music with a skill for writing can go a long way — for Marcus Barnes this winning combo has risen him to a level that far surpasses any ho-hum tyros’ rap sheet in the industry.

As Techno Editor for Mixmag and manager of his own music blog for The Independent, Marcus continually grinds harder than anyone we’ve crossed paths with. He has contributed his words to NME.com, i-D Online, Resident Advisor, Pulse Radio, and Ibiza Voice to name a few; and has conducted innumerable interviews with many top dogs in electronic music — including Seth Troxler, Guy Gerber, Carl Craig, Derrick Carter, Nicolas Jaar, DJ Sneak, and many more.

Besides writing for top tier publications Marcus also DJs, promotes parties, and hosts a weekly radio show Hoxton FM. We’re honored to host a mix from this phenom and to flip the script and interview him!

Tell us a little about yourself and how you got started in music journalism and playing electronic music?

I’ve been a journalist for almost 12 years now. I didn’t have much of an idea about what I wanted to do when I was at university, but ended up doing work experience at a magazine I loved when I was in my final year. I did really well during that placement and they kept me on as a freelance straight out of uni. Writing has always been something that came naturally to me, over the years I’ve learned a hell of a lot on the job, no formal training, all learned in the ‘real’ world of journalism, which includes extended periods at national newspapers. Music has always been a deep love of mine, but I was worried that combining it with my profession would taint my love for it, however a trip to Ibiza in 2010 made my decision for me and I immediately set about seeking out the artists who changed my life for interviews… the first of these was with Seth Troxler. Soon after that first interview I acquired a blog with The Independent, which gave me a great platform to showcase the artists I loved and my own abilities – I haven’t really looked back since… In fact, I haven’t looked back since I got that very first freelance placement back in 2003. I’m very privileged and grateful for this.

As far as DJing goes, all the music that I’ve ever been into has been DJ-based, from reggae, dancehall and hip-hop through to my first true love, drum’n’bass, and house and techno. I’d always find myself so engaged by the DJs when they were in front of me, weaving together the music in such an impressive way. I’d admired the power and control they had, and the connection with the dance floor. So, I decided it would be interesting to learn more about it and took a course with Point Blank music school with the aim of writing about my experience. Since then I’ve bought my own decks, started a party in east London and played at a few high-profile clubs in London, as well as everything from friends’ weddings to a jerk chicken pop-up… and I play everything, from nineties RnB to upfront techno and house.

From London to Burning man you seem to make the round of the worlds top party spots, what would you say is your favorite place to party and play music?

I’ve had a real crazy year, and partied in so many places around Europe. I’d say Berlin is way up there for almost perfect party vibes; from the permissive and inclusive nature of the clubs, to the attitudes of the people there and the city itself. It’s so on point in so many ways. I’ve been booked to DJ there on the 4th Jan for the first time, needless to say I’m sure that it will also become my favourite place to play music, too.

How has being a music journalist affected the way you play music? What are the greatest advantages of mixing journalism and music?

I don’t know if it’s had any effect really. I guess to a degree it gives me some kind of authority. I get a lot of new music sent to me, so I would say that having that large supply of stuff to choose from is hugely beneficial – not that it’s all about playing the latest tunes, but it is nice to have access to an abundance of material. I suppose it’s also having access to information from people, speaking to established artists who I can get recommendations from.

Being Techno Editor at Mixmag has definitely caused a shift in my sound – I play, and listen to, a lot more techno nowadays and have a newfound appreciation for it… particularly the heavy, monotonous stuff, which I previously found difficult to digest.

You are Mixmag’s techno editor, what techno artists should we be on the lookout for in 2015?

FJAAK are awesome. Their new EP on 50 Weapons is a killer, so definitely check those guys out. I hear they have a badboy live set up, too.

Yes I do! I’m setting up my own online platform, finally… It’s a space for me to do my own thing, without having to pitch ideas to editors. I have some real strong ideas about the editorial direction and how everything will play out so I’m very excited to get that rolling. Keep your eyes peeled.

I did the mix in one take, with not a lot of pre-planning to be honest – which I think makes for a great result. I didn’t want to overthink it too much, just let it flow and hopefully that shines through. I wanted it to bring together different styles and not just be a ‘deep’ mix, or a ‘dance floor’ mix. An hour isn’t great for being able to stretch out across styles, but I did my best.

I have to say nowadays I’m pretty boring and mainly drink water.