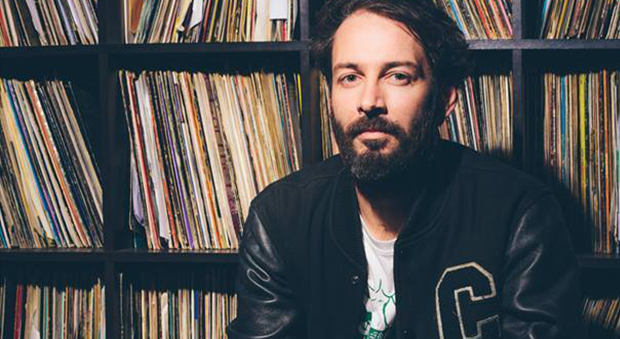 Christophe’s Futureboogie debut EP, ‘The Force,’ hit shelves in 2011–featuring remixes from fellow Bristolian Julio Bashmore, plus mixes by Lukas and PBR Streetgang. Since then, the “vibesman” has released original tracks and remixes on Hypercolour, Dirt Crew and his catchy cut of Ponty Mython’s ‘Jesus‘ on Capital Bass.

As resident DJ for Futureboogie, Christophe has had the fortuitous opportunity to rock many a dance floor at Futureboogie branded showcases and parties alongside good mate and label honcho, Dave Harvey. Christophe has also graced scores of clubs and festivals with his infectious jams: fabric and XOYO in London; Glastonbury Festival; Renate in Berlin; Barbarellas Discotheque and Garden Festival in Croatia; and More Love in Rio de Janeiro, Brazil.

Christophe’s Heroic contributions to Bristol’s thriving house music community is why we pay tribute to the fine taste-maker today. Check out this week’s Hometown Heroes mix from Christophe, and read more about his story in the interview below.

How did you get first get into house music and DJing? Do you remember a specific moment that inspired you or was it an evolution?
Hearing tracks like ‘Voodoo Ray‘ being played alongside the likes of De La Soul, Soul ll Soul and Stone Roses at local parties. It was this new infectious, energetic music and people properly got down to it. It was so exciting back then in the late 80’s early 90’s. I was hooked instantly.

I’ve always, always loved music and collected it! First foray into DJing would be putting together C90 mixtapes on my Ghetto Blaster and taking them to house parties and pretty much forcing everyone to listen!

What’s the scene like in Bristol currently? How is the city unique compared the rest of the world?
The Bristol house scene has been great for quite some time now. A really good mix of old and young, very open minded to all the different areas of dance music and very, very up for a party. It’s great! Promoters booking interesting underground DJs, big and small, plus great local DJs too, and finding interesting venues to put on the parties. I think it’s pretty healthy and definitely friendly.

I’m not so sure what makes Bristol unique or how it compares to others, but it’s definitely full of love and music and thats what’s most important.

Do you have any residencies? If we had one week in Bristol what two parties/clubs would you recommend we check out? What about two restaurants?
I’m resident at Futureboogie events, you could say, at things like Garden etc.

Picking two parties is tricky as you don’t want to leave anybody out! There are so many good events. I think an Alfresco Disco would be one… big productions and free parties in amazing spaces. Massively attended with well up for it people.

The other party I was most impressed with recently was Dirtytalk in the Hell’s Angels Bar… Amazing.  I-F & Young Marco rocking it in this amazing place. Proper underground. Reminded me of what the parties were like when I first started going out. Everyone well into the music, dancing in a dark, loud, sweaty venue. No frills, Proper Vibes.

Two restaurants would be the Ox, best steak in Bristol in an amazing venue. Casamia, Bristol, Michelin starred bad boy, easily some of the best food I’ve ever eaten. Proper banging.

How did you get tangled up with the Futureboogie crew? What’s your role within the label?
I met Dave a long time ago through some friends just out and about, we just got chatting about music and stuff and had instant connection, he’s now one of my best mates… more actually, family.

I do all the artwork for Futureboogie and DJ with and for them. Plus I’m a massive fan of all the stuff they do!

What’s on the horizon for you the remainder of 2015 and beyond?
Getting some original music out is first priority. I’ve been pretty quiet on that front lately, but I’ve been building a wicked studio full of amazing machines (with Felix Dickinson). That’s done now and summer’s drawing to a close, so expect a big influx of new material soon and hopefully, some interesting collaborations.

Playing the Futureboogie at Renate in Berlin in November; this is one of my favourite gigs in one of the best clubs in the world. Loads of fun! Also playing at More Love in Rio in January. We played at the last one and it was amazing! Situated in a disused railway station in Rio. An amazing party indeed and this time it looks to be even bigger and better. Can’t wait!

Dream gig…
I’ve been really lucky as I think Ive already played so many dream gigs already. Still love to play the terrace at Circoloco and P Bar amongst others, but generally anywhere there’s people feeling the music and dancing is a dream gig.

Dream collab…
Maurice Fulton and Chaka Khan would be awesome I reckon.

Tell us about your mix…
The usual mix of old and new plus couple of remixes and a new edit from moi. Hopefully a nice flow of proper house music. Done about 6am, slightly inebriated.