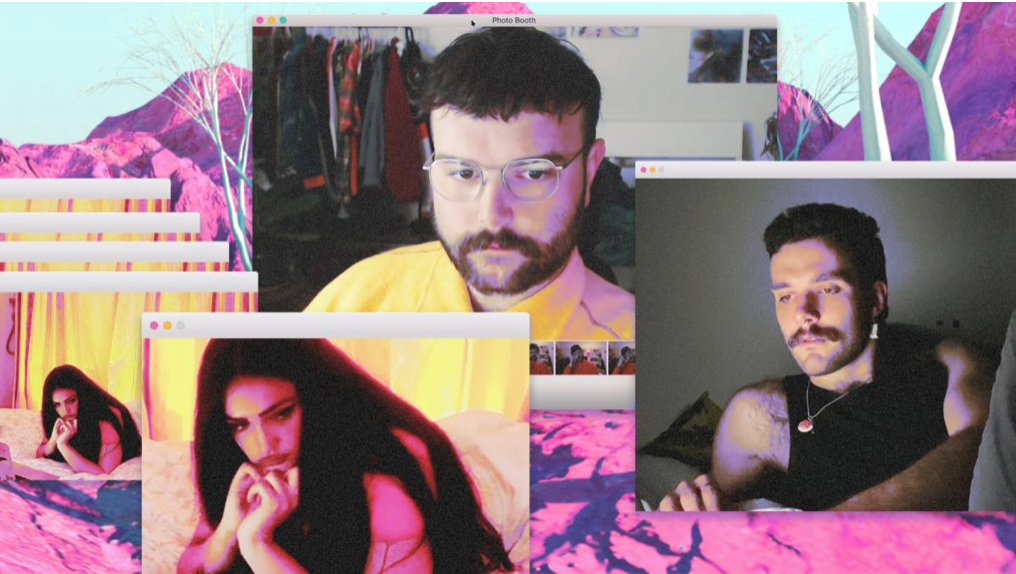 Emerging London producer Hijac has joined forces with exciting rising artists FIA and s.g.cackle on an infectious new single ‘2020 Vision’, out today alongside an incredible music video created by Hijac himself.

Finding the sweet spot between unique electronic experimentalism and infectious pop sensibilities, ‘2020 Vision’ is a track that reflects both the chaos of 2020 and the longing for a better 2021. It juxtaposes curiously uplifting melodies with a whirlwind of peaks and valleys, most notably through the delivery of FIA and s.g.cackle’s bubblegum vocoder vocals. It marks Hijac’s third single release of the year, following on from ‘Open ur eyes’ and ‘Venus Flytrap’.

The accompanying video for ‘2020 Vision’ reimagines the rise of Zoom culture during the lockdown period, taking viewers on a glitchy ride through a digital abyss, with Hijac creating 3D scans of his room, desk, laptop and face mask – all symbolic of what being stuck at home has been like for many across the nation and beyond. Speaking on the visual, Hijac describes, “The visual identity of the music video captures the essence of our current digital climate of lockdown boredom, virtual meetings and webcam parties. Where I layered it with the familiarity of the computer screen and relatable Google searches that have engulfed the past year.” He continues: “It’s like watching our experience of lockdown through the eyes of three humans in a pink parallel universe. Rather fittingly, the video was shot and edited entirely remotely from our individual bedrooms.”

“I wrote my parts of 2020 Vision as a retrospective summary of the sh*tstorm that was 2020,” FIAexplains. “The song is about my optimistic hope for the future year, but also my way of expressing the desperation to release myself from the shackles of the pandemic and go back to living the free and wild life the world and I deserve.”

s.g.cackle adds: “2020 was an insane year. Someone set light to my flat from the outside while I slept, my four-year long relationship ended, I found out that I had another (7th) sibling – all during a national lockdown/global pandemic. On the flip side I started therapy, fell in love, got a degree, made a tonne of new friends, and wrote some really incredible music. My verse is an attempt to document the claustrophobia of being stuck in my bedroom trying to process all the craziness of that year. It’s bittersweet. It’s a tragicomedy and I really hope you love my verse. <3”

A graduate from the SOPHIE school of hyperpop and maximalist electronics, Hijac burst onto the scene in 2019 with ‘Go’, a debut single that drew broad support from the likes of Annie Nightingale on BBC Radio 1, Triple J, Crik Crok Radio Italy and NRK Radio Norway. He followed this up with ‘Wanna Call?’ last year, a track praised for its sweet-as-candy pop palate with an unexpected tropical bass climax, and ‘Rubber’, another tropical bass-influenced track released on Don Records.

A one-woman British-South Asian pop songwriter, producer, and visual artist, FIA operates in the realm of the accelerated, bass-heavy beats and futuristic experimental pop, crafting music that is as playful and experimental as it is serious and high production. Her writing and productions have been included in Spotify’s Fresh Finds and Hyperpop Playlist, Apple Music playlists Glitchand The Brit List and BBC Introducing.

s.g.cackle is the alias of East London-based vocalist and producer Sam Glover, who accredits ‘Don’t Hug Me I’m Scared’, Max Martin, James Blake and unchecked self-loathing as the catalysts for his peculiar yet addictive artistic lens. Formerly known as ‘Cacklehill’, his vocal work has been featured in a multitude of Kai Whiston songs, as well as Umru’s remix of Caroline Polachek’s ‘Ocean of Tears’.

‘2020 Vision’ is a glitchy hyperpop anthem in waiting.