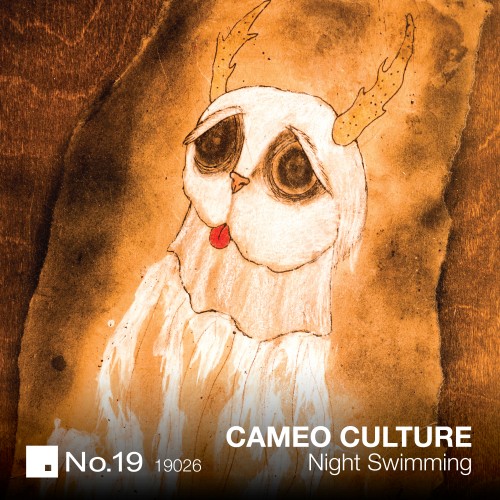 [Forthcoming Release] Since it’s inception back in 2008, No. 19 Music has shown that it is unafraid of variety and style in its choice of releases, constantly pushing boundaries and setting the bar for what is quality music. And by releasing Cameo Culture‘s debut EP, Night Swimming, they’ve once again proven that they can confidently stand apart from the crowd and let the music speak for itself. While much of the industry seems to be relying heavily on the use of samples, Cameo Culture takes his talents as a mult-instrumentalist and singer/songwriter and pieces together two beautiful pieces of original work.

Title track “Night Swimming” is a melodic anthem, a soothing, uplifting song that still manages to have that specific kind of deep that has come to be a No. 19 signature sound. “Argeppiated bass, Rhodes keys and organic percussion” lay the foundation for the hypnotic vocals provided by Cameo Culture and his significant other. At first, the lyrics are a little hard to understand due to an effect placed on them, but the only thing this causes is for the listener to pay closer attention which in turn draws them deeper into the music, allowing them to appreciate not only the words, but other parts of the composition that they may have missed the first time around.

Second of the two original tracks, “Parts of You and I” is that special blend of sounds that emotionally has you travelling between laying out on sunny beaches to sweating it up on a dark dance floor. Opening with Latin flavored percussion, “You and I” has the listener swaying almost instantly. When the vocals, once again courtesy of Cameo Culture, and echoing piano chords kick in, the song becomes entrancing, allowing you to get lost in the voice and the “rolling bass and swathes of swirling FX” momentarily, at least until it gives way for the drums to shine through again so as to not let you forget that this is a track that you should be dancing to.

Rounding off the EP is Slow Hands remix of “Parts of You and I,” a darker, deeper re-imagining of the song.

Night Swimming is a breathe of fresh air, a piece of work that is destined to make waves in  what has seemed to be, as of late, a stagnant sea of sounds. If this is just the beginning of a musical relationship between Cameo Culture and No. 19, I look forward to hearing what surprises they have in store for us in the future.