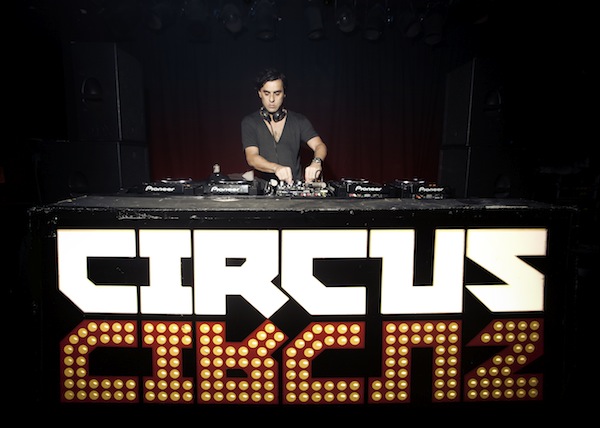 The music industry is a nuanced space. There are DJs, labels, promoters, partygoers; there are genres, smack-talking, exclusivity, and inconceivable trends. It takes a lot to stand out and make it and very little to slip in, not even as unique as a snowflake in a snowstorm. In a world that takes some agression to pop, it is, in some ways, ironic that what boosts 15 minutes of fame into longevity, respect, and prolific productivity is modesty and approachability.

Yousef and his coveted Circus parties have earned that respect. The master producer and DJ’s geniality, coupled with his hard work and incredible community-oriented attitude, have granted Circus its 10 year anniversary this past year, celebrated on the Circus X compilation by heavy hitters like Green Velvet, Nic Fanciulli, Carl Cox, and Guti, among others (more on this later).

Yousef remembers the first time Loco Dice played in England, that time Carl Cox flattened Masque, and early morning disco dance parties with Laurent Garnier. These experiences were born at Circus Nights, held at Liverpool’s Masque club, and have since proliferated across continents and inspired a record label by the same name.

It’s no accident the partyline has lasted so long –Yousef believes in community, egalitarianism, open-mindedness and in musical seriousness buttressed by casual fun.

Yousef is shy to call Circus a brand, since it has been more a hobby than anything – an investment in which any monetary return is beyond secondary –and says,

“[Circus] is such an honest party because I book people who first and foremost I’m really interested in, musically, and I’m a fan, and also more often than not they’re my friends.

I’d describe it as an after party or a house party, but in a club. The music is great, the sound the lights, and everyone is welcome. It’s really serious music but everything is kind of a laugh as well.

The music is really authentic. The way I really like to make people feel is, welcome. It’s not a weird record shop vibe. It’s one of the few places where you can just go out by yourself. I’ve really worked hard to make people feel like a part of something. There’s no hierarchy. If there was any hierarchy it’s the people that have paid to get in. That’s most sensible.”

It’s inarguable that such a party is the end-all-be-all of experiences; to feel at home and yet be on another planet is such a luxury. That vision has paid off and created something special, with the Circus X Compilation (Circus Recordings), which dropped last week, which is a collection of tracks produced by Carl Cox, Nick Curly and others as a special contribution to Yousef’s vision. {Purchase HERE.}

“I was just going to do part one, but I’m going to have to do a part two,” he laughs, “Because so many people said yeah [to making a track for the anniversary]… Green Velvet and I were on a Circus tour together in Indonesia and he told me, ‘Yo man, I’ll make you a track.’ And he delivered that “Bigger Than Prince” track and I was like, ‘WOW.’ It’s really quirky, really kind of current but completely different from anything else. It’s a total dynamic changer.”

“It has just been amazing to have people like Carl Cox, Guti, Green Velvet, Sneak all sign to Circus Recordings even just for one track,” Yousef iterates.

The compilation’s expressed vision is to explore the relationship between DJs and the club space and, beautifully, magically, each track on the compilation came out sounding incredibly different from one another. Circus X is a special set, with an extensive spectrum of sound, which presented a distinct challenge for mixing, which was done by Yousef himself.

“I was massively grateful that all these guys stepped up and supported me,” says Yousef. The compilation is currently available for purchase and if you want to get your hands on that Green Velvet track everyone is buzzing about for summer, you’ll need to by the whole album. Start to finish, though, the compilation is a worthy purchase. Guti’s ambient brilliance to Nic Fanciulli’s heavy hitting techno, it is truly a treat of a journey through musical interpretation.

Even after ten years (five for the label), it seems Circus is just heating up. Yousef has been traveling incessantly, producing tracks for Defected, earning a psychology degree (yes, you read correctly; after our interview he had to hit the books before heading to the club), spending time with his wife, and will soon be spending seventeen consecutive weeks at Ibiza’s newest club, Bomba.

Make sure to get all the up to date info on Yousef, his label and beautiful party at the links below. Also, keep a look out for Circus X part II which will feature exclusive tracks from Kerri Chandler, Paul Rich, and Steve Lawler, among others.