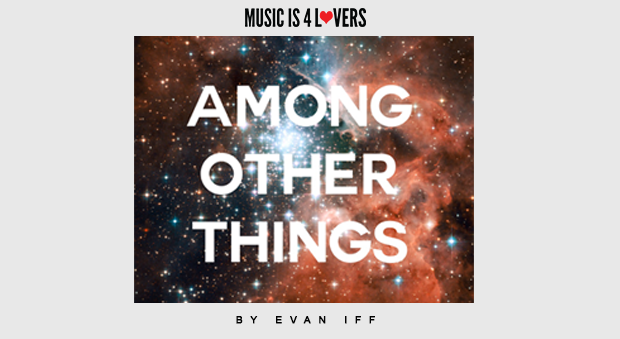 Luke Alan has been producing music in Los Angeles since 2010; first as Left Minded, a duo project with partner in crime Neil G, and now a solo artist as Evan Iff. Evan’s single-handed productions have found a home on such labels as Needwant and Dirt Crew — two MI4L favs; and have amassed plays from guys like Till von Sein and Roy Davis Jr. Evan Iff’s tracks have also soared the radio waves on Kiss FM and Ministry of Sound. Luke embraces the slow and steady progress; avoiding the over hype but catching the ears and attention of the scene’s most respected.

“Among Other Things” was written, produced, arranged, mixed, and mastered by Evan Iff over the course of two years in three cities: Los Angeles, London, and Phuket. Nine tracks woven together with precision to take the listener from the dance floor to a relaxing poolside afternoon and onto a quintessential emotional deep house ride. This album is Evan Iff in a nutshell.

How is it that you have an entire LP that is this good and yet unsigned?
Thanks, glad you guys think it’s good! Well, its been through the ringer. Its been on deck with more than one label as has a lot of my music. I finally just got really tired of waiting around to share my music and I didn’t want to make any changes that were being requested. This is my story. Music doesn’t make money anyhow and I didn’t see the point of not just giving it away. Would’ve been nice to have the cool label tag but I’m a bit over that.

Tell us a little bit about some of the tracks on the album. Which are your favorites? Are there any you are particularly excited to share with people?
These are 9 tracks written throughout 3 continents. Some in London, some in Thailand, and some in LA. Hmm, my personal fav has always been “Tratser” but it’s probably only because it took me longer than any other track to make and I’m very proud of the production on it. My most recent favorite is “Naku”. That sample is from a record that I used to mash all throughout my early days in house music so it has special meaning to me. I’m excited to share them all really, in my biased opinion I think it’s cool to listen to all 9 from start to finish.

How long have you been producing dance music? What were some of your breakthrough moments?
I’ve been producing since 2008 (wow, 7 fkn years ago haha). Oh man, when Neil and I got our EP signed to Paper as Left Minded I freaked the fuck out. I think my Faith & Trust EP on Large was a big moment for me, some of the best feedback I’ve ever gotten from some of my heroes. It also lead to me getting signed to Serenades (Roberto Rodriguez) which was a very special moment for me. And the day Peter from Dirt Crew hit me up and wanted Rush and We Met In The Fall; that was wicked, I hit up my good friend James Dexter (great producer and DJ) immediately then I went out that night with Steve Mill and Alex Blaxx (both mega talents) and celebrated haha. Lastly, finally getting a 12″ full EP to my own on Swedish Brandy. Sorry for the super long answer.

In a few words, how would you sum up your sound?
Deep, melodic, emotional, not entirely for the dance floor.

Who are some of your electronic influences and who are some of your nonelectronic influences who have shaped you into the artist you are today?
Electronic: Pol_On, Jimpster, Roberto Rodriguez, Underworld, Andre Lodemann, Shur I Kan (I can go through all my old records but I didn’t really draw inspiration from that, I wasn’t producing then). Non Electronic: my love of soul, R&B, and hip hop doesn’t really show in my house music tbh besides sampling.

What would you say are some of the biggest flaws in the dance music record business today, particularly those releasing non-commercial music?
There is just too much and no money left to be made what-so-ever. You’re better off leaking everything and just getting it on content.

What are some important advice notes to give new up-and-coming producers who are excited about releasing music?
Try and only release on labels you truly respect and actually buy music from. It might take time and honestly it might never happen (Freerange will never happen for me!)

How important would you say it is for new listeners of electronic music to do some research and understand the roots of the music they love rather than just jumping in headfirst?
It’s important if you’re trying to be someone in the music world, I think, but if you just love the music, why the hell not jump right in? Once you fall in love you’re almost sure to dig back in the history anyhow.

Tell us three things you can’t live without?
My girl and our dog, hummus, vodka.

Tell us about your moniker how did you come up with this name?
Evan Iff is a play on words for “even if”. Even if (add anything here), I’m still gonna love this music. etc etc.

3 Desert Island Albums:
Janet Jackson – Rhythm Nation, D’Angelo – Voodoo, RHV – Shut The Fuck Up And Dance (i was a rave kid), The Foreign Exchange – Connected. I added one.