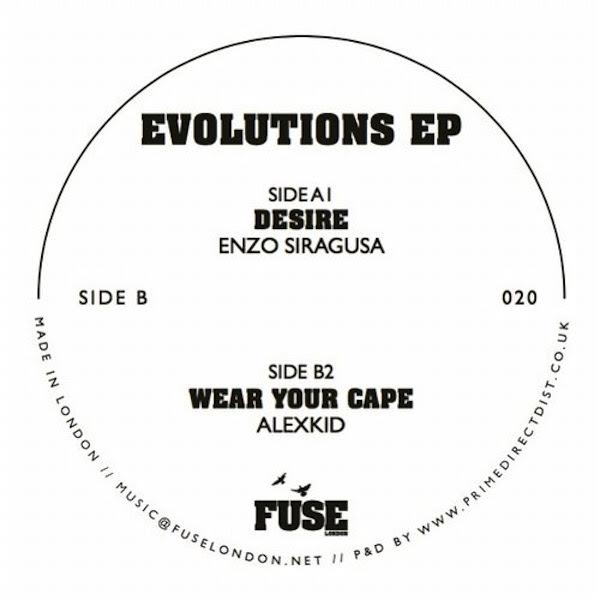 Fuse London is a label that since its beginnings has released really cool records, from the first until the last,  but this year has been the best for the label. Their latest releases have been exceptional, working with great artists such as Seb Zito, Rich NXT, Jun Akimoto, Chris Lattner, Alex Arnout, and many others.  The label’s main focus is on techno & house music.

This record ‘Evolution ‘ has two masterpieces: on side A you can find ‘Desire ‘, an extraordinary tune from the label head, Enzo Siragusa. He has created a percussive track with a mix of deep melodies and uplifting grooves that drives the crowd into a mental atmosphere, demonstrating how he can deliver epic music for an early warm up mix, peak hours or early after hours. Enzo is a DJ and producer born and based in London, UK with a long trajectory.  Creator of  ‘FUSE’ that started as an event and brand in 2008 and after its great success and development it became a record label on 2011.

On the flipside we find the French House and Techno maestro, Alexkid, with his track ‘ Wear Your Cape ‘.  This one is just perfect, with a sound that could keeps you dancing until the sun comes up. It has the whole kit for the perfect tune, a mix of cosmic groove, trippy vocals, fat bass line and to finish it up a classic dub touch. Pure gold…

Alexkid is a French producer who has his own label called Wu-Dubs. He deserves especial recognition for his remixes; with one great example is “Come with me”.