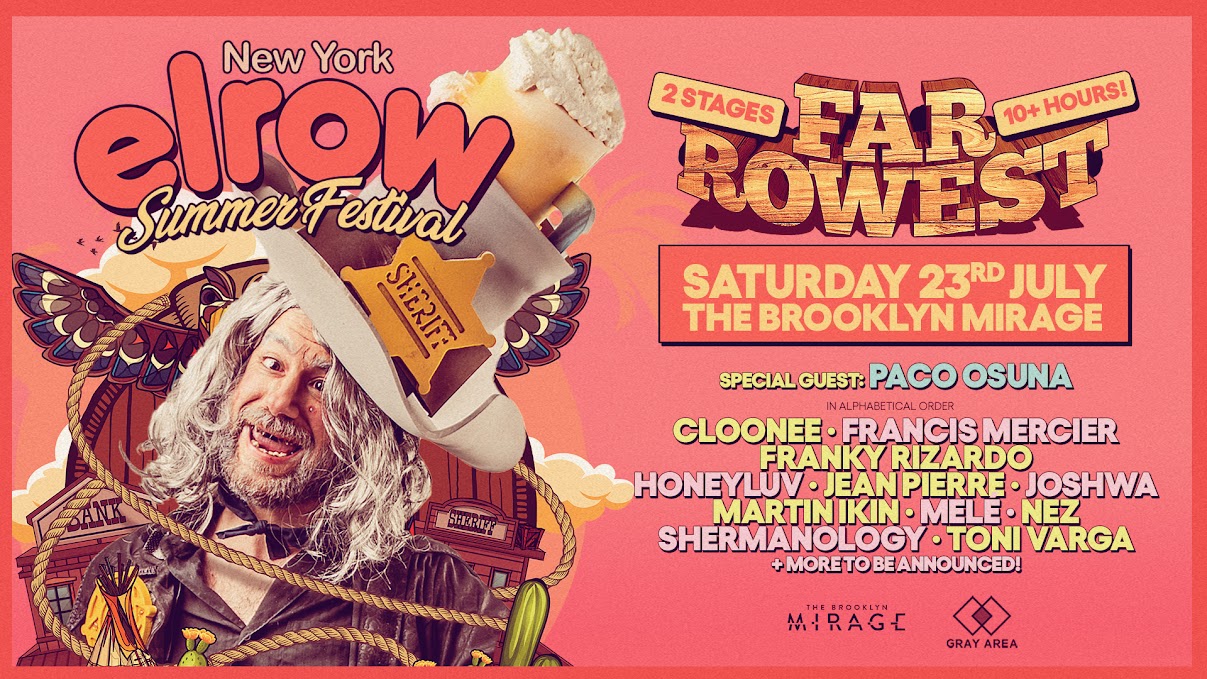 More about:
Watch the elrow mini historical documentary HERE
Watch the making of the elrow performances and decors HERE

The world’s most vividly imaginative and colourful party is coming back to New York City’s Brooklyn Mirage on Saturday July 23rd. Featuring 10+ hours of music across two stages with indoor and outdoor dancing, special sunset sets and much more under their twisted Wild Wild West theme of Far Rowest! Soundtracked by special guest Paco Osuna, along with Cloonee, Francis Mercier, Honeyluv, Franky Rizardo, Jean Pierre, Joshwa, Martin Ikin, Mele, Neo, Shermanology, Toni Varga with more to come. After a sold out pre-sale, limited tickets are now on sale to the public here.

elrow is known all over the planet for its out of this world production and spectacularly immersive themes. It is a carnival experience unlike any other – one that overloads you with sensory delights and takes you a million miles away from everyday life. There is no expense spared when the team rolls into town and this time it is at the all new Brooklyn Mirage.. The Wild Wild West theme means you can expect all manner of cowboy designs, Western props and vibrant decor that will transport you into another world. 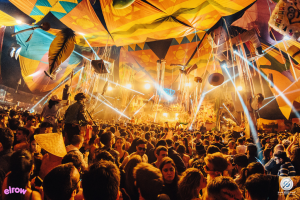 PRAISE FOR elrow:
Now elrow is a “worldwide sensation” (Forbes) powered by a “nightlife dynasty” (Resident Advisor) rapidly becoming “The Medicis of raving” (The Guardian). To put it simply: “Fun cannot be created, marketed, or bought, and the family-run business of elrow house parties encapsulates such vibes with effortless finesse.” (Complex)

elrow is an award-winning experiential event concept and party series founded in 2010 by Cruz and Juan Arnau Lasierra; the sixth generation from a dynasty of entrepreneurs also responsible for creating Monegros Festival and legendary Club Florida 135 in Fraga, Spain.

From their head-quarters in Barcelona, elrow have taken the world by storm with their unforgettable party style, pairing elaborate production, interactive performers and zany characters with the best electronic music, placing them as a global reference for circus inspired parties with tickets to the visual spectaculars usually selling out in minutes.

A myriad of different themes and concepts makeup elrow’s zeitgeist with sub-brands including ‘Rowlympics’; their own take on the Olympic games, their Brazilian jungle carnival theme, ‘Sambodromo de Brasil’ and flag-ship theme ‘Singermorning’.

A one-of-a-kind gem, the 80,000 square foot venue is home to The Brooklyn Mirage, The Great Hall, and The Kings Hall. Prominently boasting a state-of-the-art KV2 sound system, a 200-foot video wall, mesmerising laser displays, and pyrotechnic capabilities, the multifaceted indoor and outdoor events space was nominated for ‘Best Club’ in the 2019 International Dance Music Awards. Having hosted everything from live music to EDM, underground house, and techno, the venue has become the crown jewel for New York nightlife aficionados. Since re-opening its doors last summer, the venue has already welcomed the likes of Above & Beyond, Black Coffee, Carl Cox, Christina Aguilera, John Summit, Jungle, Kaytranada, Skrillex, Tycho, and many more, setting an exciting glimpse as to what to expect within the next year.

Led by Avant Gardner’s founder, owner, and chief creative officer, Billy Bildstein, The Brooklyn Mirage’s latest iteration boasts its most intricate and impressive design yet. A collaboration between Bildstein and new multi-media studio Conveyor, the new design features one of the world’s largest outdoor video walls at 200 feet in length and 30 feet high. Displayed over 1000 LED panels at 15K ultra-wide resolution, the roughly 30 million pixels will allow for film grade visual effects. With a custom-built media server and its processing technology, leading visual content creators from around the world will have the ability to go beyond traditional show visuals and create real-time generated experiences set in hyperrealistic environments, a first at this scale. With construction and roof design led by NYC-based construction studio HEINI, The Brooklyn Mirage’s new stage roof spans over 100 feet wide and 50 feet in depth and features an eye-catching floating effect as a result of its modular space frame system, the first fully domestically fabricated stage of its kind. 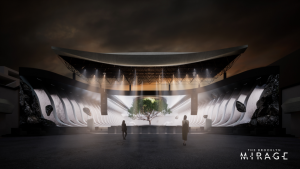