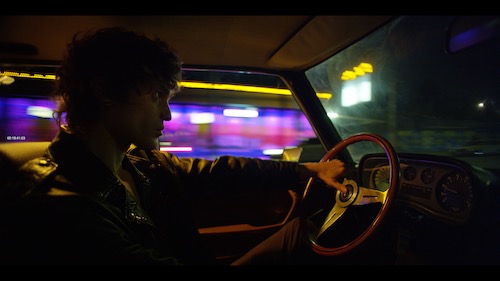 The video follows DeathbyRomy and a male love interest throughout a dark eerie night in Los Angeles, including a journey through the iconic 2nd Street Tunnel in Downtown. The two visit an ominous party where a look into their eyes can tell there’s something strange inside both of them. DJ Politik himself makes a brief cameo at the end, exuding the same supernatural spirit coming from within him.

Regarding the video, Director ALEXI said “Given the title and theme of the record, we tried to pay homage to the 80’s thriller/horror genre and create a narrative around the idea of werewolves running wild at night.”

DJ Politik added, “Given that this is my debut single as an artist/producer, I wanted to really make an impact with the visual. Something bold and cinematic that aligns with the theme of the record — dark, eerie, energetic, and reckless. This is the type of quality and attention-to-detail that motivates and inspires me to continue creating and evolving as an artist.”

A mainstay on the national club circuit, DJ Politik holds major residencies in each of the country’s hottest nightlife destinations including Las Vegas, Miami, New York, Chicago, Atlantic City, and Los Angeles.  His name has become synonymous with iconic celeb driven events such as the infamous Neon Carnival at Coachella, and he has shared the stage with performing artists such as Drake and Travis Scott, and shared the decks with fellow deejays such as The Chainsmokers, Skrillex, and Diplo.

Success behind the turntables ultimately led to the studio, where he has carefully crafted his sound, embodying the same genre-bending philosophy he soaked up during his formative years as a deejay in L.A.

Citing the late DJ AM and Mark Ronson as key influences, DJ Politik‘s burgeoning career as a producer is rooted in his tasteful & eclectic style of mixing records. The son of a popular Ukrainian singer, he grew up in a musical household. As a child, he often found himself in recording studios, playing with drum machines and recording mixtapes. His interest in the art of deejaying began to take shape after an obsession with the rich history & culture of hip-hop.

As a young aspiring deejay growing up in L.A., he would eventually cut his teeth in the local nightlife scene by sneaking into exclusive nightclubs while still in high school. The bubbling electro scene and its raw, genre-bending dance parties such as AM & Steve Aoki’s “Banana Split,” with guest deejays such as Daft Punk, Justice, and MSTRKFT, played a pivotal role in the development of Paul’s energetic style of deejaying.

Pitting pop melodies and propulsive beats against hypnotic vocals and deeply personal lyrics, singer, songwriter and dark-pop provocateur DeathbyRomy has quickly cultivated a loyal following since dropping her debut album Monsters in 2018. More recently she has released a slew of singles across 2020.

With more releases and a debut project set for 2021, ‘Wolf’ is just the beginning for DJ Politik as an artist in his own right.