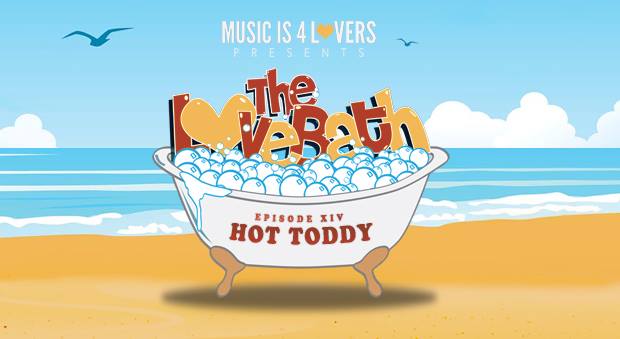 Hot Toddy — one of the founding members of UK disco sensation Crazy P — takes us far beneath the bubbly surface with a blend of love songs that are reminiscent of the mixtapes we all used to compose for our high-school sweethearts. Each track delicately selected to form a soundtrack perfect for a lil’ afternoon delight with your Lover. We feel honored to have Hot Toddy inaugurated into our LoveBath series; as his humble talents seem boundless and his demeanor is as genuine and pleasant as one person’s personality can be.

Crazy P’s latest LP “Walk Dance Talk Sing” dropped last month on Walk Don’t Walk – and it’s wonderful. Can you give us a little behind-the-scenes snapshot of Crazy P and walk us through what the creative process on one song might look like? What role do you play in the band?
Thank you! Well, like the last album (When We On), we kept the main bulk of the writing and playing just between the 3 of us. I think this has helped craft a more thoughtful, intimate sound. It was written and recorded in Nottingham quite sporadically over 3 years. We’ve had a lot going on in recent times and it was hard to concentrate solely on the album for a decent length, but we got there in the end! The creative process varies from track to track, we never have an agenda; just try and have fun and hopefully something good will happen! But, just to give you an example, with “Something More” this actually started as a jam with the band (the only tune on the album that is), then me and Jim took the recording as a template and rerecorded a new arrangement in the studio. Then we gave the mix to Dani so she could concentrate on the lyrics in her own time. She recorded some guide vocals on a small USB mic at home which we actually ended up using because they sounded so good.

Our favorite tracks on the album are “Like a Fool” and “Something More” – amazing! What are some upcoming gigs with the band you’re especially excited about?
We we’ve just finished the main part of the album tour which has been fantastic, especially in Brighton and London. Coming up we have the Garden Festival in Croatia, which we’ve been lucky to have been part of from the start (10 years ago). Its the last one this year so it gonna be pretty special.

How did it feel to be named No.9 on Traxsourse Top 100 Nu-Disco Artists of 2014? Quite an accomplishment we must say. Any solo work on the horizon you can tell us about? What is one thing that would make your musical career more successful?

Yea, that was a bit of a surprise, didn’t really see that coming; but really nice to get some props! Just starting to get back into my solo stuff, as CrazyP has taken up all my time recently as you can probably imagine. I’m hoping to do another solo album, or maybe an EP or 2 over the next 12 months, but its very early days. If my secret sex tapes ever surface on the ol’ internet, I’m sure my trajectory would go through the roof…well it worked for Paris Hilton.

Name one jam in your crate that gets all the ladies on the dance floor.
Tata Vegas version of “Give It Up for Love” never fails.

Tell us about your mix…
Well, I’ve kind of gone for a literal interpretation with the mix. I’ve picked some of may favourite disco and soul tunes which deal with the multi faceted beast that is “love.” Mainly old stuff, apart from the last tune. Not much mixing going on here as its quite eclectic, but its nice to allow the tracks to breathe.

Drink of choice…
Red wine mainly because it goes with food so well, and I love my food. I’m alway partial to a Gin and Tonic as well.