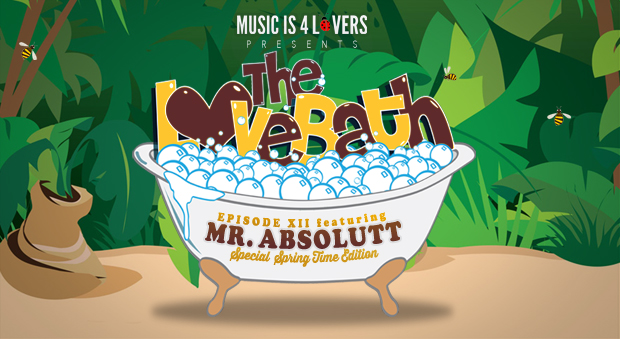 Spring is just around the corner and we have a very special Lovebath buzzing in for you from Spanish producer Mr. Absolutt. Sergio started mixing funk, balearic downtempo and dreamy eclectic disco in the 1990s. He’s played for the legendary Café Del Mar and has released his reworks as Mr. Absolutt on labels like Editorial, Midnight Riot, Masterworks Music, Sound Exhibitions, Spa In Disco and Deep Sense, and also on his own funk imprint Pushing Hands Recordings. We’re excited to share his steamy spring time melodies in this special edition of The LoveBath.

** Click Here if you do not see the Soundcloud player.

Where are you from and where did you grow up?
I’m from Asturias, a province of northern Spain. I grew up between Pola de Siero, a small town in the center of the region which in my teens had a lot of movement musically, and Gijon, a coastal town where I now reside.

Tell us a little bit about how you got started and what led you towards soul and disco music?
After a few years listening to techno, trance and the famous acid-house music in the mid-90s, I began to mix with Goa Trance albums that a close friend, who was into the movement at the time left me. At that time there were very good things happening in terms of electronic music in Asturias, Detroit techno and electro started arriving there.

I started playing at the Duos Club of Pola de Siero on Sunday afternoons, where I mixed techno and tech-house, and that started it all. I was buying my music from Exotec Records in Gijón, the quintessential distributor of Asturias which remains open today. Onofre, its founder and a person I respect both as a professional and a friend, left me packages of records to pick up. That’s how I grew my collection. Shortly after that I discovered House, and from there I opted for the warmer sound.

There was a legendary club in the north, La Real, where a large pool of djs broke out. I played there in sporadically in long House sessions. La Real regularly hosted International artists from the techno scene at that time like Surgeon, Damon Wild, Dave Clarke, Tony Regis …. or nationals like Rox, Ike, Eulogio … and you could even catch Laurent Garnier or Der Dritteraum, among many others.

In 1999 I moved to Vitoria Gastéiz in the Vasco Country, where I interacted in the local scene. The change was huge because I started to enjoy my first jam sessions with hip-hop, turntablism and black music. That’s when disco music started to influence me. I always liked the eighties boxes TR 808 or 909 and low and powerful synths.

One year after that I started working as a resident in the Absolutt Club (hence my stage name) and that gave way to a lot of change in my musical selections. I remember that in 2002 the first LP from Metro Area came out, and it was after hearing that album that I began to spin slower tempos, and started flirting with Prince or Madonna edits by Ray Mang, between the house and electro I was already playing at the time. At that time I was getting a supply of tunes from Ohmio Records, run by two of my great friends Henry and Alex.

What is the scene like in Spain right now and how has it changed since the 90s?
Around here and given the digital era, among other things, you never know what you may find. Much of the promoters choose electronic festivals for the masses, but we have a space to offer and support what we like as well. Not all clubs are committed to quality either, you always have to be looking for that hole.

In Spain there are labels like Rayko’s Rare Wiri Records, Santa Esperanza from Ilya Santana or the brand new label with Fran Deeper at the helm, Spa in Disco, plus Pushing Hands among many others who bet on club music with a touch of disco and house foundations.

Since the 90s there hasn’t been anything in terms of quality around Spain except in the larger cities like Madrid or Barcelona, where there are clubs that are worth visiting because they host quality artists like Moodyman, Todd Terje, Pete Herbert, Marcellus Pittman, Crazy P… or festivals like Sonar is one of the leading events in the state.

Where are some places you are playing and what are they like?
Two weeks ago I got back from a gig in Café del Mar in Tarifa, and I played in a Hotel called Banti overlooking the sunset. Next month I will be with the Spa in Disco chief in Palma de Mallorca playing at 2 Beach Club. Also I have my space Fridays at KNDJ Radio, where I offer a weekly online session.

How did Pushing Hands come about and what are your plans for the label in the future?
Pushing Hands emerged in 2013. I liked to spin reworks and edits, just like now, and began to create my own music, this gave me the idea for my own label, to produce and offer my music to the public. Thanks to that I also got to collaborate with the UK label Midnight Riot, headed by Andy Yam Who? to whom I am very grateful. I have also released on Editorial Records, among others. Pushing Hands has published tracks by other artists of our time like 80’s Child, Wonkar Edits and Gorka, who to me are some of the greats of the current disco scene. Right now I’m preparing another Various Artists EP for the tenth Pushing Hands release. I go step by step, I don’t have any real long-term plans, although we are also getting ready to press the first vinyl in our collectors series very soon.

Are you working on anything exciting in the studio? What kind of gear are you using?
Right now I’m working on an EP for Masterworks Music, the label from 80’s Child, and one for Midnight Riot. I work a lot with plug-ins, but also use an analog Roland PCR 300, a BCR 2000 effect module compressor and obviously studio monitors, sound card, etc.

Most influential record(s) in your collection?
There could be many, but I’ll stick with Back in Charge by Russ Gabriel, Soul on Wax – 1996.

What are a few tracks that are doing it for you right now?
I listen to everything all the time, A Vision Of Panorama for example.

What do you do when you’re not making music?
Listen to music, bike, skate and go down to the beach with my girl when time permits.

Tell us a little bit about your Lovebath mix.
It is a selection of current disco edits & reworks that I’m playing at the moment… I hope you like it.