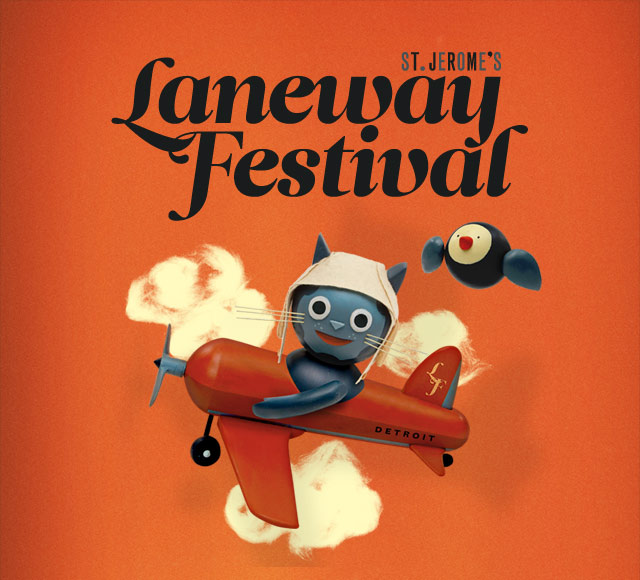 On Saturday, September 14th, the organizers of St. Jerome’s Laneway Festival will bring their roving Australian festival to U.S. soil for the very first time. With an indie-inclined lineup that includes dual headliners Sigur Rós and The National, the event caught our attention when an additional stage was added to the festivities, curated by Paxahau, the event production company behind Movement Electronic Music Festival in Detroit since 2006.

Paxahau partnered with local record label Ghostly International to bring sophisticated sounds to the one-day outing. Their stage will feature appearances from noted Ghostly artists Heathered Pearls, Beacon, Shigeto, Adult., and founding father, Matthew Dear. Paxahau President Jason Huvaere took time from his packed schedule to chat with us about the stage, the partnership with Ghostly, and what else Paxahau has in store for the future.

Why don’t you start off by telling us a little about how you initially got involved with the festival. Can you touch on how the partnership with [record label] Ghostly International came together; did they approach you both at the same time?

Our friend, Adama Schneider of Palace Entertainment – the organization supporting Laneway Detroit, asked us to get involved by curating a stage that would resemble the Movement festival vibe. The partnership with Ghostly was a natural process as we looked into what type of artists would play the Movement stage.

In regards to the co-sponsorship with Ghostly, what is the role of each in producing this stage? Have you done any work like this together in the past?

Paxahau had sole responsibility for booking the stage. We decided to partner with Ghostly and exclusively book artists from their roster because we felt it best portrayed the electronic sound that would fit with Laneway’s lineup, while maintaining a local presence. We have worked with Ghostly in the past on events like Yel at St. Andrew’s and Untitled at The Shelter, just to name a couple. It’s very exciting to be working together again, and is something we’re very much looking forward to seeing come to fruition.

Paxahau formally formed in 1998 and was based in Ferndale, and Ghostly burst onto the scene shortly after, in 1999, out of Ann, Arbor, Michigan. Obviously this was during the ‘second wave’ of the techno movement, but what do you see as happening specifically in the greater Detroit area at that time that led to the creation of these very forward-thinking and long-lasting brands?

There was a really unique underground culture that was taking place throughout Detroit in the nineties. Technology and Internet allowed us to easily share what was happening here during that time with the rest of the world. Sam Valenti also did a wonderful job in putting together such a creative team behind Ghostly; they continue to reach new heights while still maintaining a “cool” underground feel to their brand.

Laneway has been running since 2004 in Australia. What do you think it says about Detroit that, for their first satellite festival, they chose to do it here?

I think Detroit is the perfect spot for what Laneway is looking to do in the states. Music has always been an intricate part of Detroit, and I think the Laneway organizers recognize that point. The festival has an incredible background in showcasing some of the most talented artists in the industry, and this year is no exception.

You recently posted an article which stated that attendees at the Future of Places Conference in Stockholm most frequently associated the city of Detroit with techno. Not abandoned buildings, or murder, or job loss. Techno. Were you surprised at this finding? How do you see the perception of Detroit differing within America, versus around the world, especially in Europe, where electronic music is more widely understood and accepted?

It was interesting to hear people outside of the electronic music community associate Detroit with techno. Europe has always been a big supporter of Detroit techno – they were the first to accept it and embrace it before anywhere else.

Paxahau took over the Detroit Electronic Music Festival, now known as Movement, in 2006. Having been to the festival myself a number of years now, I can confidently say that you guys do an amazing job, not only in curating a well-rounded line-up, but also of always keeping the festival-goer’s experience first. What advice would you give to new festivals that you wish someone had told you when you were first starting out? What’s the secret to a well-run weekend?

Always take notes for the next year! We were lucky enough to get our feet wet with festival when Kevin Saunderson gave us the opportunity to produce the Underground stage in 2005. The stage pretty much became our own mini-festival. We booked our own artists and managed our own stage. The opportunity opened our eyes and sparked our interest in wanting to produce the entire festival. We also learned that the key to any successful event is to surround yourself with a dedicated, hard-working team that communicates with one another on all fronts.

As well as this upcoming stage at Laneway, you have also sponsored a stage at Electric Forest in Rothbury, Michigan for the past couple of years. In what ways is it different to produce a stage at somebody else’s festival, than at Movement, where you call all the shots?

Curating a stage at other festivals is an interesting experience. Rather than worrying about booking and producing five stages, we put all of our ideas into one stage. Plus, we’ve been fortunate enough to work with festival organizers that understand our brand and give us the freedom to get creative with the artists we book.

The lineup at Laneway draws heavily from the indie rock persuasion. Did you approach your stage differently than you would one at an electronic music festival?

Somewhat. I think our booking agent did a great job with booking artists that would represent our brand, yet maintain Laneway’s aesthetic at the same time. For instance, a few of the artists on the Movement stage, including Matthew Dear, Shigeto and Adult., performed at this year’s Movement festival.

Paxahau is credited with bringing an authentic line-up to your events, while constantly growing with the ever-changing electronic musical landscape. What does that mean to you? How do you stay relevant without selling out, especially as ‘EDM’ continues to grow in mainstream popularity?

Our focus has always been to highlight artists who make music in its purest form and respect the city’s music history. However, in order to gain more attention for the quality underground acts that are showcased each year, we also book some more mainstream acts in the hopes that people who knew those names would also be exposed to artists that they did not know they would love.

I read that the name Paxahau comes from a combination of Mayan words that translate to “The power of music in a new time.” I absolutely love that. How does that name relate to what you see as Paxahau’s role in the world of electronic music?

Paxahau’s role has always been to represent and communicate the music that is around us or that we are involved with somehow. In most cases this means producing events and promoting artists in Detroit. Wherever the artist is from, there is a certain “serious” nature about playing in Detroit, as it has been such an inspirational place for so many for so long. Our job is to maintain as much of that focus and relevance as possible, and helping promote selected music at concert events asserts the position that Detroit and Electronic Music really do affect lives and the industry in a unique way.

Paxahau continues to bring top-notch talent to Detroit throughout the year (a recent highlight for me was the Movement appreciation party you threw for free with Greg Wilson). You’re throwing your first U.K. party in November, and you are heavily involved with next year’s Moogfest, taking place April 2014 in Asheville, North Carolina. You clearly have no plans of slowing down. What else can we expect from Paxahau in the future?

We’re definitely pumped for the Warehouse Project in the UK this November and Moogfest 2014 – both events are shaping up really well. Our 2013 calendar is packed with some major events around the city, including our 15 Year Anniversary show with Marc Kinchen and Shaun Reeves, as well as Claude VonStroke in October.

We’re continuously looking for ways to increase our footprint in the promotion and production market. We have a few other projects we’re currently working on for 2014 and beyond.