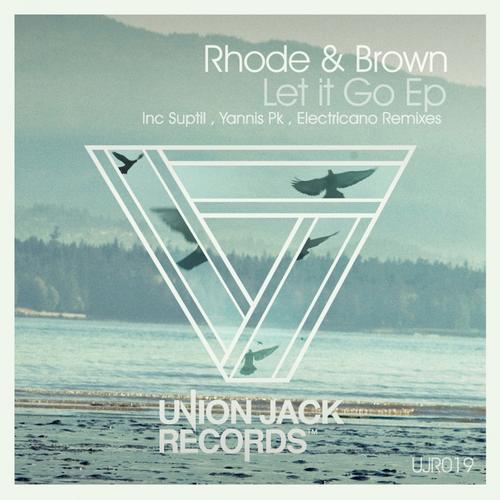 At only 21 years of age, Friedrich Trede and Stephan Michael Braun, the Munich-based duo otherwise known as Rhode & Brown, may seem relatively young, but it’s that audacity of youth that have gotten them to where they are today. Already locking down a residency at Munich’s famed Kong Club, and a number of releases on labels such as Stranjuur, Needwant, and PetFood, where they were included on the imprint’s celebrated Daydreaming compilation, Rhode & Brown are certainly paying their dues. Having also been part of Union Jack Records Future Funk compilation, the German pair now return to the Mexican label for its latest release, a 5-track EP titled Let It Go. From beaches at sunset to dark warehouses in the depths of a metropolitan city, the record includes something suitable for any setting.

Title track, ‘Let It Go,’ kicks off immediately with an energetic high-hat/snare combo, which serves as the foundation of the production and provides the energy necessary for the dance floor. However, the German duo quickly open up the track, letting it blossom into an airy, sensual production. Utilizing a cacophony of atmospheric elements, from subtle guitar riffs to funky bass lines to the vocal sample from which the song gets its title, its the echoing details that make Let It Go truly resonate.

The first of two ‘Let It Go’ remixes comes courtesy of another German duo, Chriss Vogt and Patrick Jeremic, collectively known as Suptil. Dubbed the Funky Owl Remix, the pair do the title justice, as their version provides the pitched down, reverberating darkness and haunting, echoing vocals that night owls and warehouse aficionados crave, but still with that funky energy brought on by the original. Rounding out the Let It Go remixes, Electricano pulls out all the bells and whistles (literally) to give the track a high energy, peak hour vibe. Hard hitting percussion, wonky synths and basslines, topped with a sprinkling of electronic keys and combined with a minimal, atmospheric use of the main vocal sample make Electricanos take on the song a perfect selection for a sunset dance floor.

Rhode & Brown follow up with the second original production on the EP, Emotions, another track leaning towards the darker end of the spectrum. An echoing twang and occasional stretched out key stab set the mood here, creating an aura of suspense throughout the track. Greek producer Yannis PK closes out the EP in a fun way with his rendition of Emotions. Adding no small amount of groove to the track, Yannis gives it a bit of playfulness, starting off with disco drums and builds on top of that, adding everything from soulful organs to quick, futuristic lasers and robotic synths. A perfect way to close out the record, Yannis remix is an ideal choice to get any dance party going.