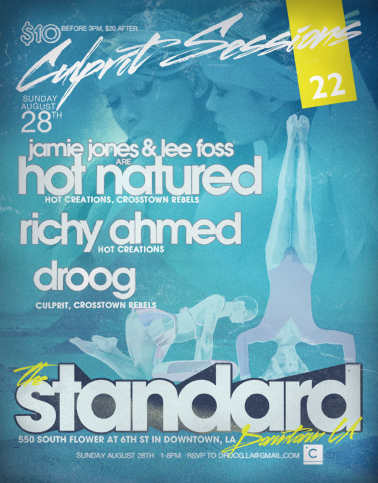 [Party] On August 28th, Culprit Sessions will host one of its most eagerly anticipated events of the year…any year, really. A sweet homecoming of sorts as two of Culprit’s original artists and the two people most responsible for shaping the Droog/Culprit Sessions @ the Standard and its global reputation return triumphantly.

Since laying down the blueprint for future rooftop shenanigans with three Standard appearances back in 2008 and early 2009, Jamie Jones has been busy taking over the world of discerning dance music with a slew of mega hits and a whirlwind of memorable DJ gigs.

His long-time close friend and musical companion Lee Foss was even more instrumental in the development of the Culprit brand. His meteoric rise from the the studio obsessive in his first months after the fateful move from Chicago in february of 2008 to his standing of immense popularity now, Lee has had an incredible journey.

Richy Ahmed is one of the top Hot Natured/Hot Creations lieutenants, having risen steadily over the last two years, whilst DJing everywhere from UK to Ibiza, Berlin and Russia. Richy is a true character and we warmly welcome him to the fold.

As usual Droog throw their collective DJ hats in this wildly appealing ring.

This is certain to be the day party of the Summer for LA. It would be foolish to miss this one.

*We highly suggest booking rooms at the Standard Hotel in Downtown, LA to ensure you get tickets. This event will hit capacity very early on and there is no guarantee of entry without a hotel room.