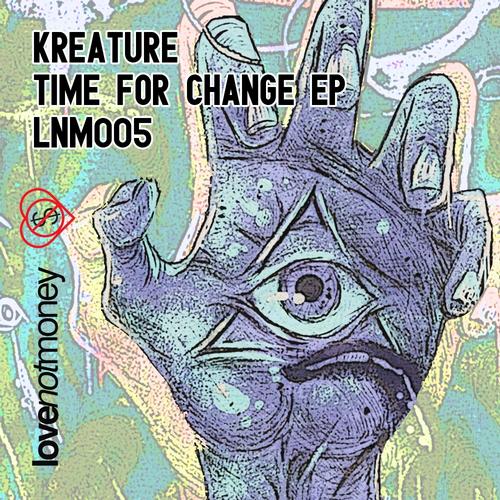 [New Release] We are big fans of Love Not Money Records here at MI4L and this release, “Time For Change” EP, by Kreature is a great example of why.

Here at LNM we’re all about breaking new talent. On our second release we gave the world Real Nice & Cubiq who’s first ever release ‘Had Enough’ received amazing success being championed by BBC Radio 1 and gaining support from top DJ’s worldwide. Now we’re proud to bring you the debut EP from one of the UK’s most promising young producers… Kreature!

After dominating Beatport’s Indie Dance / Nu Disco chart, hitting the No.2 spot and entering the overall top 100 with his remix of Real Nice & Cubiq’s hit track ‘Had Enough’, we welcome him aboard LNM as he delivers two standout pieces of House that are bound to be favourited by the who’s who of the industry.

One month in to 2012 and with the world’s consciousness shifting towards a brighter future we drop the aptly named ‘Time For Change EP’. Kicking things off with lead track ‘Stop Waiting’, a super-cool slab of underground House sporting one of the most infectious bass-lines and lead synths we’ve heard in a while, simply put, this track craves attention!

On the flip-side ‘Seek The Truth’ takes on a different approach, an atmospheric ride through waves of deep grooves and trippy synths, complimented nicely by a wondering bass-line makes this track the perfect counterpart to ‘Stop Waiting’.

The EP on a whole is an amazing introduction to Kreatures own work and a nod towards a bright future and plenty more chart topping productions.