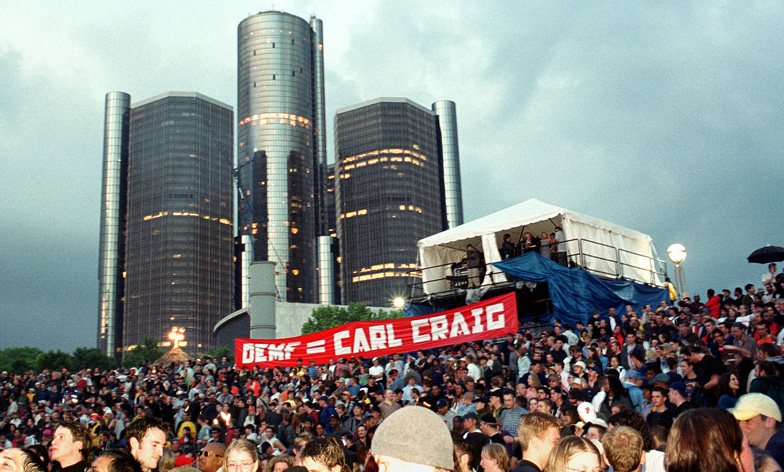 For good or ill, Detroit, Michigan has acquired a legendary reputation over the years. The city’s financial woes have deterred many, yet from the ashes of its downfall blossoms uniquely curated music, art and urban farming scenes rooted in an authentically raw underground culture.

It is no wonder house music’s dark relative techno was born and bred here, encompassing the swift intensity of the city itself and nurturing the careers of acclaimed artists such as Richie Hawtin, Kevin Saunderson and Carl Craig. Since its inception in the mid 1980s, Detroit’s love of techno has inspired an avid electronic music scene spanning many genres, animating a vibrant nightlife and housing such prominent labels as Dirtybird and Visionquest.

Each Memorial Day Weekend, Detroit invites musical aficionados from around the world to soak in the first sounds of the summer, and there is truly no better way to kick off the sunny season than at the Movement Electronic Music Festival, popularly known as DEMF.


Buzzing with energy, the city revolves around the beat coursing throughout the metropolitan landscape that originates in Hart Plaza. To celebrate its thirteenth run, Detroit turns out an impressive and eclectic lineup this year, scattered amongst five stages and three beautiful summer days.

The Red Bull Music Academy and Beatport stages always boast the fiercest lineups, and if the past is any indication, the most encapsulating sound systems. This year, Red Bull takes over the Main Stage spot, with Beatport moving into the Academy’s old stomping grounds on the river. The Insomniac twisted Rothbury festival, Electric Forest, is showcasing their sound at the previous Beatport-inhabited spot, while the Underground and Made in Detroit stages will remain in their locations from years past.

Thankfully, the Movement stages are strategically placed within the confines of Hart Plaza, making it easy to run from stage to stage so as to not miss a beat from the epic overlaps.

Saturday, Chris Malinchak will open up the Beatport stage with some sunny deep house at 12:30, while xxxy takes over Red Bull soon after with some UK funky and garage beats to amp up the tone of Day 1. British tastemaker T. Williams follows, yet at the same time, Made in Detroit features the Culprit collaborators Ataxia, whose dreamy approach to house is sure to impress. Back at Red Bull, Shigeto will be workin’ his enigmatic live set before Miguel Campbell dishes up the disco into the evening on the river. As night falls, Red Bull makes way for the likes of legendary innovators Moodymann, Carl Craig, Dave Clarke and Richie Hawtin whose dancefloor expertise and musical knowledge will make for an epic conclusion to the first day.

Annie Hall kicks off Sunday Funday at noon with some Spanish ambiance at Beatport for the eager early birds (or perhaps the insomniacs). To those in need of a disco nap, never fear, Bill Patrick is sure to bring the right energy to fit the vibe at 2:00 with his impeccable taste, warming you up for EFUNK captains Soul Clap to take you on a rich and spirited musical journey. At the same time, J. Phlip will be representing Dirtybird, swervin’ hips at the Electric Forest stage as Tensnake transforms Beatport with his imaginitive soundscape at 5:30, followed by the eerie selections of Art Department. Red Bull offers some noteworthy performances into the evening, such as Matthew Dear’s shadowy alter ego Audion, whose live performance may turn out to be as much an art exhibition as a musical appearance, while just next door at Underground you can get your German techno fix with Ben Klock b2b Marcel Dettman or catch tech house mistress Magda at Made in Detroit. Closing out Day 2, Masters At Work (Kenny Dope & Louie Vega) will bring their New York style and upbeat Latin influence to Beatport just before Squarepusher shuts down the Academy with his extraordinary visually collaborative live show.

As the festival comes to a close on Monday, Detroit celebrates the end of this blessed weekend with some stellar acts to lift spirits for the last hoorah.  At 1:00, Laura Jones will have you groovin’ with some deep house at Beatport followed by Leftroom boss Matt Tolfrey and UK native George Fitzgerald’s house concept.

Over at Red Bull, TOKiMONSTA will take you on quite the afternoon trip with her otherworldly sound at 4:30, just before Azari & III’s energetic live performance, overlapping with Ellen Allien’s vibrant techno feel over at Beatport. Through the night, the extraordinary live musical composition of one Mr. Nicolas Jaar will keep you glued to the Academy, leading into Totally Enormous Extinct Dinosaur’s upbeat and lyrically infused live show.

At the same time, you can get your taste of Chicago house with Cajmere, otherwise known as Green Velvet, followed by Maceo Plex’s original genre fusing persona Maetrik. Halfway through Maetrik’s set, French DJ extraordinaire Francois K’s rich musical history may beckon you back to Red Bull with his masterpiece of a set, while Detroit legends Derrick May & Kevin Saunderson present their “Hi-Tech Soul Concept,” definitely a fitting option to conclude out the long weekend.

Just next door, old school vinyl junkie DVS1 will be closing up Underground with his stealth collection, while the John Digweed shuts down Beatport with his impeccable taste and musical mystery, leaving a bittersweet and accomplished taste in your mouth from such an amazingly crafted weekend.

Movement is definitely one for the books this year. Its unmatchable vibe will set the tone for a musically infused summer, full of fresh beats, new connections and lots of love.