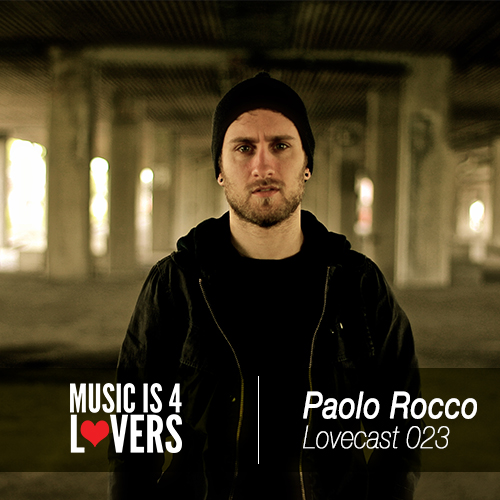 Up next on our Lovecast series is Montreal native, Paolo Rocco. He first caught our attention last year with his release, That I Am,  on Real Tone Records. The title track garnered support from Dyed Soundorom, Soul Clap, Ryan Crosson, Dubfire, Magda, DJ Sneak, Dan Ghenacia and more, which soon landed the track on a Noir compilation for Defected. Since then, he has had releases on Noir, Made to Play and Klasse, working with artists like Reboot, Lars Behrenroth, MANIK, Cari Golden, Amirali, Round Table Knights and more. We took a moment to interview and spotlight this rising star in our Lovecast mix series because we believe he’s only just begun to show us what he can do.

Born and raised in Montreal, Canada

To be honest I never really followed a scene growing up. I mean I enjoyed various types of music but never dug to deep into it. At first I think I was more interested in the art of DJing rather than the music. During my high school years I naturally gravitated towards dance music and found an interest in playing two tracks at the same time, blending them and manipulating them to tell a story in my own way. Even when I first started going to clubs, I always naturally gravitated towards the DJ booth. I was more interested in what was going on there rather than the actual party. Sounds kind of nerdy when I think about it.

I think it’s great, and I think it can suck all at the same time. I believe that every place is kind of like that to a certain degree. It really comes down to what and whom you surround yourself with. It’s like shopping for music in general, sometimes you have to dig deep to find the good shit but eventually you know where to look.

I first started to take a stab at production with a buddy of mine. It was a really frustrating process because we couldn’t achieve the sound we wanted and we had no guidance what so ever. Eventually we went our own ways in terms of production and at that point all I had was myself. It was either I gave it one last honest go or I continue without taking it so seriously and start to focus on a career outside of music. I never really looked back since then.

Right now I guess I’ll say alone. I have a lot of ideas I want to get out of the way for myself. That being said if an interesting opportunity comes to collaborate with someone and it happens in a very organic way I’m definitely open to it. I just don’t want to feel forced into collaborating.

I think it’s important. Environment has a big influence on people in general. However I think the people you surround yourself with is a lot more important than where you actual are.

Think about what you want out of all of this, do what you believe has to be done to succeed, believe in yourself, work at it for as many hours as you can.

So hard to name just one, and this answer would probably change depending on my mood. But right now I’ll go with Karizma feat. DJ Spen – 4 The Love (The Main Vocal Club Mix).

Best thing about being on the road is the overall experience. It truly is a blessing to be able to travel because of a passion. It’s very inspiring as well; every time I come back home I’m ready to work. “Worst” is a harsh word because overall I really do enjoy it, but if I had to pick out something aside from the common stresses of travel I would say the occasional sensation of loneliness. It’s not something to complain about though I feel very lucky have the opportunities. The best moment was when I sat in my plane seat on my very first international gig and thought to myself, I can’t believe someone is actually flying me half way around the world to be myself.

There’s my next single coming out on Saved Records called “People Say”. It’s coming out June 17th and it features a remix by Nic Fanciulli. Aside from that, gigging, and a slue of remixes soon to come, I’m working on a collaborative project with a brand/blog about to launch called “Bauhaus Collective”. It’s kind of a lifestyle blog for artists but the big picture is not like anything I’ve seen before.

All my podcasts are recorded live and in one take. I don’t think too much about it. I just press record and whatever happens, happens. If I make a mistake, I leave it because I feel like that’s what makes it human and relatable. I also want to show the reality of a mix. Sometimes amazing things come from mistakes and I want to show that, at the same time I think it’s only fair to own all the mistakes you make good or bad. In regards to music this mix has a collection of promos and tracks I’m digging at the moment as well as some unreleased stuff by yours truly.