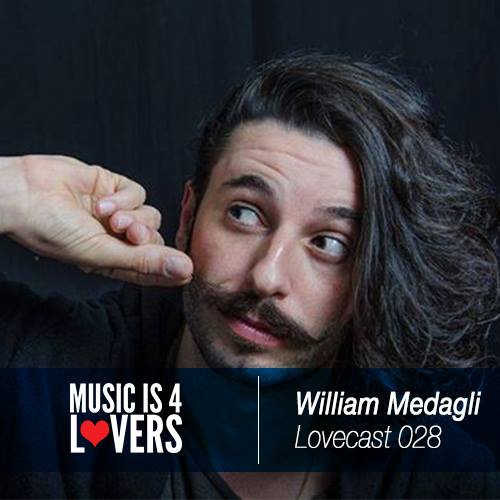 William Medagli was born in Cassino, a small city between Rome and Naples, in 1980. He grew up in the magical and innovative 80s, an era when music started using new instruments and was reinvented, creating brand new genres and styles based on drum machines and syncs. During these years, William became interested in all those new genres of music, which is what set his path in his future and career choice. His musical influences are various: from Giorgio Moroder to Kraftwerk, from Depeche Mode to Kool And The Gang, not jazz to rock & blues, but it was ITALODISCO, that really influenced his work.

He attended “School of Music” as a child, choosing the piano as his main instrument while he kept cultivating his interest for electronic music. His parents had always been his backbone for his musical and personal growth. In the mid 90s, he started his DJ career playing at private parties around his hometown, while producing his first musical “experiments”. For a short period of time he decided to stop playing until he found someone dear to him who would reignite the desire to love his work and his passion: music. It inspired him to create his more elaborate work that brought him his first real results. He played for underground clubs that brought him also to Rome, Naples , London and private parties in Barcelona and the Riviera. Thanks to his talent he was invited to play in Paris and it was there where his true musical career started. With his arrival overseas, his dream is coming to fruition.

After emigrating in 2011 to France, he became a resident at one of the most exclusive clubs in Paris, thanks to his immersive sound in his eccentric set. Around that time his girlfriend, DJ Thallulah, began to play and produce, blown away by her skill and talent, he asked her to play with him B2B.

I’m from Cassino, a small town between Rome and Naples, and I still living here after a brief experience spent in Paris.

Now we aren’t in a good situation, due to a lack of music culture. Everybody thinks only of mass media. Absolutely I don’t relate to this scene at all.

Let’s say that I was lucky enough, my family helped me to grow up musically, making me study the piano and then I always listened to music since I was young.  My cousin was a DJ in my town in the 80’s, so I grew up listening to a lot of music.

How has it influenced your music and shaped you into the producer/dj you are today?

Maybe the ItaloDisco, the space disco, the house of the late 80’s, and all the science in the early 90’s between Chicago and Detroit, as well as hip hop.

Music is my life, it will be now and forever. Having studied piano since I was a child, I never thought about anything else, just to do it better and believe in what I do. Summarizing all, I think that I haven’t done anything yet. It’s a very hard world.

In a few words, how would you describe your style of house music?

Now I could define it as dark, deep house with weaving of techno, although my previous productions are highly nudisco.

I’m very traditionalist about this. I keep using Cubase, but then I finish the whole work with Logic.

What format do you use when DJing?

When I first began to mix I used exclusively vinyl. I always repudiated CD’s, so I continued for many years. Then, with the coming of technology, I found Traktor and I fell in love with it. I never forsook it, using only Traktor with timecode support.

What are the most famous labels you have collaborated with?

I immediately believed in Sleazy Deep and today it’s still a strong point of nudisco scene, then I casually collaborated with the legendary King Street, and I just started to work with Etruria with some releases on Betoko’s Chill Mint.

With which producers have you collaborated?

Can you tell us a little more about your collaboration with Thallulah and how that is going?

We get along very much when we talk about music, we compare a lot and I can say that our project is going well.

Do you find it difficult to create music with your significant other? Does it cross over into your regular relationship?

We don’t have any kind of problem, ‘cause we’re a stable couple both musically and in life. Indeed we’re growing a lot in this period helping each other.

You have any big hits that are coming out in the near future?

I hope so! We have many projects for the future, excellent release and labels with very good remixes, including a special one… But we’ll reveal all soon 😉

Do you have any upcoming gigs that you are really excited about?

We don’t have any dates at the moment. I thought it was more easier despite our releases but isn’t so. We’d love to make people feel and hear our music, but maybe we need to work about it a little bit more.

Can you tell us about a few of your favorite record labels and why you like them so much?

At the moment I’m fascinated by Life & Death, maybe the only that excites me. I think it’s the only one that really looks to the future more than the others. I think that they’re has been a “music collapse”. I believed in some big label, but they keep disappointing me.

Who are some your favorite producers at the moment?

It’s a hard world, but if you believe, maybe something will happen. It’s the only advice I can give, ‘cause I’m looking for some advices too. Hahaha

Charlie – Spacer Woman doubtless. It’s my favorite song, it has everything, music and emotions. I can’t say that it changed my life, but it had really helped me.

I listen to music every day, even rock, I enjoy playing the piano or just stay with my girlfriend, and I do many other things that everybody, less or normal, does today.

What are you most looking forward to in the coming year?

Mmmh, it’s hard to say, there are so many things. Talking about music I would really like to release even more, and maybe think about settling down with my Thallulah.

It’s a mix of quite eclectic, dub, house , techno… In a few words, it my new sound! I can’t say much more than this so… Hear it!