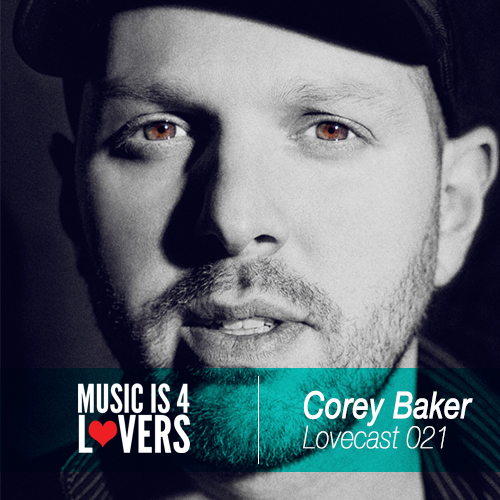 Corey Baker is a producer/DJ hailing from the United States. Corey, originally from the Seattle area, cut his teeth in the New York club scene at an early age before making the move to London in 2006. London is where Corey made a name for himself helping establish the trio “Wildkats,” who have seen major success internationally with their productions on labels like Hot Creations, Get Physical, Hot Waves, Off Recordings and many more.

As a solo producer, Corey has had releases on Mexico’s MEXA Records, Electronique and Black Strobe’s French powerhouse label Black Strobe Records as a collaboration with Hot Creations artist Richy Ahmed. As both part of Wildkats and as a solo artist, Corey has had the opportunity to travel and play at some of the worlds most elite festivals and clubs — Fabric in London, Sonar in Barcelona, Fusion Festival  in Berlin, Space in Ibiza, BPM Festival in Mexico, WMC in Miami, Burning Man in Nevada, just to name a few.

Now facing another crossroads, Corey has relocated back to New York City to continue his musical journey in the US. Keep a look out for new collaborations and a string of original productions on some great labels that will definitely grab your attention.

I’ve recently relocated back to New York, Brooklyn to be precise, but before that I was in London.

Brooklyn is on the verge of seriously being a contender of a [premier] clubbing destination. There are some lovely new venues that have just opened, and are opening, that will put Brooklyn on the map. On any given weekend you can find a variety of underground warehouse parties and club venues hosting international artists from all over the world.

I grew up in the Seattle area, so pretty small compared to what I’m now used to, but had my fair share of great nights out while growing up there.

How has it influenced your music and shaped you into the producer/dj you are today?

The influences that I came up on were mostly West Coast based. Some of my faves back then were DJ Buck, Doc Martin, DJ Ali, DJ Rasoul. I followed the San Francisco deep house scene pretty heavily and have taken a lot of producers that I admired back then and still try to use some of their styles in my music today.

You have lived in many places all over the world. How would you compare and contrast them music and scene wise?

I would have to say that London’s scene has one of the best that I’ve been around on a consistent basis. There are loads of other great cites that have tons to bring to the table when it comes to great parties and the underground scene when it comes to music, but London really does it for me.

I started to really focus on music just before I moved to London around 2006. I had DJ’d for years before that but I guess had a little too much fun to seriously focus on production..haha

I guess when I started getting international bookings it seemed a bit more like I had actually made an impact. At that point for me, I thought to myself that this was actually working and I can do it for a living.

What are your favorite three cities/places that you have played in?

What is it like being a part of the treacherous three that is Wildkats?

Hahaha..Well it’s been amazing really. It all started innocently and the way it’s turned out from the beginning has given me loads of opportunities, friends and some great memories so far.

How has being in a group affected you as a producer and as a person?

As a producer I’ve come to find that I actually prefer working with someone in the studio. As a person I’ve found that it’s really tested my patience. Sometimes our minds think alike and other times our thoughts are in totally different directions. I suppose that’s gonna happen in any given situation though.

Put in the hours behind the desk..it will not happen overnight.

Tough one..Hmmm. I’m sure that on multiple occasions I have thought to myself “This track is the most amazing tune I’ve ever heard.” But, there were also a lot of other factors that came in to make me think that. A particular party or setting, my state of mind, sound system, etc, but as far as a particular piece of music, I’ll say that there are too many out there to choose from.

There are some great releases in the works for Wildkats, Corey Baker solo and a new collaboration I’ve been working on with Rami Deejay, but I can’t really say much about them.

Are there any producers or DJs that you have never seen live that are on your list to see play?

I’ve never seen Chicken Lips or Idjut Boys play before..Love that style of music and would love to see either of them play.

I use a Mac and use both Logic and Ableton Live

This mix is some older but mostly new music that you would probably hear me play in a set..I hope you all are feeling it!!