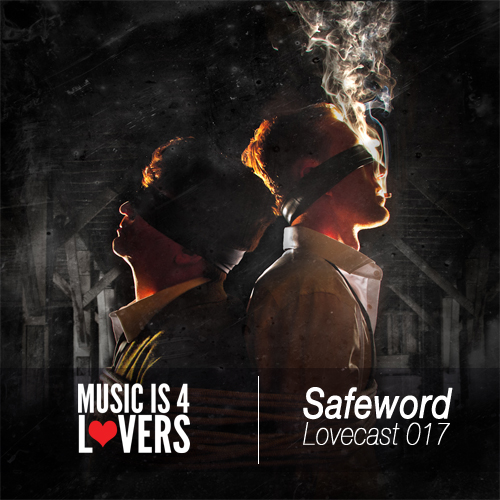 Safeword is the result of a decade-long friendship and a mutual love for music between San Francisco’s Clint Stewart and Marc Smith. The duo has worked side by side on music for years, so the eventual pairing was inevitable. Although the two share a great deal of the same musical interests, its the differences that make it. Both Stewart and Smith bring an individual perspective to the studio, creating an incredibly diverse dynamic ranging from deep lush house to the heavier side of techno and all things in between.With their foundation laid in thick, heavy drums, lush melodies and hypnotic atmospherics, Safeword’s every cut, as well as their DJ and live set, is a pulsating, cerebral campaign, track-by-track leaving indelible marks on its listeners. It’s the delicate interplay of pleasurable highs and dynamic lows that set this pair into their own realm of creation. With hugely successful EP’s on Mobilee, Dessous and Bad Animal as well as their addition to Lee Burridge’s All Day I Dream events, 2013 looks to be the year where no one forgets the Safeword.

True to their unique blend of influences and inspirations, this mix is a true daydream, a true journey into all things Safeword. Get Lost In It …

So, you guys have know each other for a while, both raised in Florida, met at University in Jacksonville in 2000 and moved to Miami together after … What brought you to San Francisco?

CS: Marc moved to Miami before me and I ended up crashing on the couch their on and off for about half a year. Then, Marc moved out to SF and I moved to Hawaii for a couple years and visited SF a few times a year for gigs. At the time we had started a label together and Marc had moved to SF to be in a better place musically as SF really had a special vibe.

MS: I moved to SF to start a now defunct record label and to develop myself as an artist. At the time SF was really the best place for House/Techno.

CS: I came for the label launch party in April 07 and never got on my return flight home. San Francisco definitely has this really tight community of people who love the music and also a ton of great artists and producers so it seemed the most logical place to be. Also, for me, SF is the perfect combination of big city and small town. I still surf frequently and live by the beach, so its the perfect balance for me.

You guys have been hitting clubs all over the states, you also hit Sonar in 2012, and the All Day I Dream parties in LA and BPM in 2013 … What’s your favorite venue and vibe to play? Do you prefer clubs, house parties, or festivals?

CS: Wow, thats a tough question because there are so many good events that it’s hard to pick just one, and each type of event has it’s own way of being special, but I would say that 222 Hyde in SF and Watergate in Berlin are hands down my 2 favorite places to play in the world. As for the vibe, I really prefer intimacy over huge crowds but I enjoy any event that people are letting loose and going for it. Really, as long as the crowd is committed, any gig is great.

MS: I really like the outdoor vibe of the All Day I Dream parties. There is a very specific aesthetic that they achieve which we haven’t seen done by anyone else.

Any particular dream party, club, or festival you would like to be a part of?

CS: Being picked by Lee to be part of the All Day I Dream events now is really something special and a huge honor for us. It was a goal of mine and now that it’s happened it’s really amazing and I feel like all the other goals we have set out for ourselves are absolutely attainable. I’d love to play some of the European festivals like Melt, or the Garden Festival in Croatia. Also, Asia is definitely in the crosshairs with festivals like Labyrinth in Japan. Also, I’ve heard that San Diego is on fire right now so would be cool to check out. But I’d have to say with all honesty, any gig with a bunch of our friends in an amazing place somewhere in the world would be as good as it gets.

MS: I would say the same about All Day I Dream.

Do you guys prefer to work alone or do you like to do collaborations?  Any dream person you would like to make some magic with?

CS: I’d say that we both really enjoy the chemistry of collaborating with different artists, whether they be singer/songwriters or fellow producers. There is something special that happens when working with other artists that doesn’t happen in a solo environment. Were working on a new cut with Dave Aju now as well as writing an EP with a really amazing musician, Nat Kendall, which we think is going to be something really special. We’ve spoke with and are trying to do some collaborations with our good friends from SF like Tone of Arc and PillowTalk but it gets tough to find the time with everyones schedules so hopefully something soon. As for artists I would like to work with, the list is really long, but if I had to pick a few I’d say… Koze, Caribou, Robag Whrume, James Holden, Ame, Herbert and for non dance music artists… Jack White, Josh Homme and Dan Auerbach. And if I had a time machine, Giorgio Moroder and Donald Byrd, and CAN.

MS: I work best while collaborating, It’s always nice to have a chance to hear something through different ears. I’m really looking forward to our Dave Aju collaboration as well as our Nat Kendall collaboration. My dream collaborator would be Erykah Badu.

Your sound ranges from All Day I Dream spellbinding sounds to deep and heavy entrancing tech … What would you say best describes your sound?

CS: That’ tough. I’ve tried to think of a single word or phrase that would describe our sound but I still have yet to come up with something short and sweet. I know that both Marc and I are into the experimentation aspect of making music and were always using different sound palettes and new ideas when we create. I feel like there are so many artists today who use the same palette of sounds in every song they make and for me, that just isn’t interesting or unique. We are always evolving our sound in a new direction and are trying to do something new with each piece of music. Some days I feel like making a deep sensual track and other days I just want to do something heavy. But in the end, it has to be sexy and work for the ladies whether its tough or deep or somewhere in between.

MS: I think you described it well. It does range from Techy to Deep to the “Romantic Techno” sound. We’ve tried from when we first started working together to have a more versatile sound. I like that it gives us the ability to change our live set performances to suit the environment. Just as you would a DJ set.

What’s coming up for you guys in 2013? Any big news you want to announce?

CS: There is definitely some big plans for Safeword in 2013. We will be doing more of the All Day I Dream events this year and we couldn’t be more stoked. It is absolutely one of the best parties on the planet and I know Lee has some big ideas so we’re really excited to see what he has up his wizard’s sleeve! We will also be in Berlin this summer and are working on dates and more stuff now. We’ve also been finishing a ton of new material for new EP’s on Mobilee and Bad Animal as well as some remixes for our friends band Symobls of the West, one for our buddies Ataxia on Culprit and a few others. All in all we are super excited to see what 2013 has in store.

MS: I’m pregnant with twins… and I’ll be in Europe for this summer maybe longer.

And about the name Safeword …

Safeword, a name that started as an inside joke in 2008. A “safe word” is jargon from kinky sex culture. A person’s “safe word” is used to end sexual role play.

“We used to just say, ‘The safe word is ‘butterscotch,’” says Stewart.

“It still feels like the beginning to me,” Stewart says. “We’re getting really close to the tipping point.”

And when it goes too far, do the guys have safe words of their own? “Kenny Loggins,” Smith said.