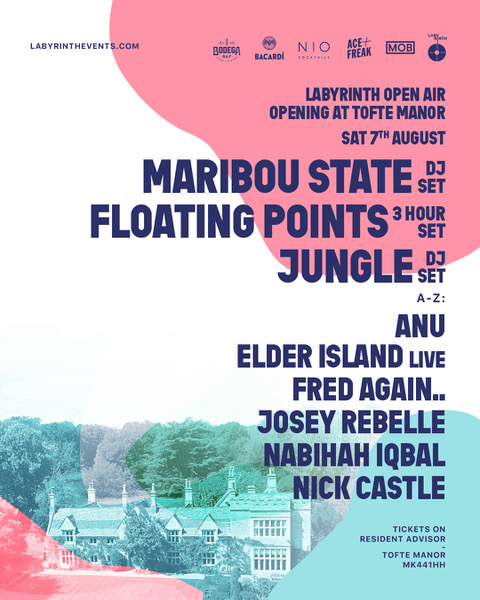 Labyrinth debuts at the beautiful Tofte Manor with a collection of some of the most exciting producers and DJs in UK dance music.

Since 2011 Maribou State has built a global reputation through two incredible albums on Ninja Tune, ‘Portraits’ and ‘Kingdoms in Colour’. The duo’s music is as tasteful as it is catchy and as creative, as it is timeless – their music has been the heartbeat to so many of our lives. Maribou State will play the closing set of the event.

With a Mercury 2021 nomination recently announced, the revered Floating Points also joins for an extended 3 hour set on the Labyrinth Stage and his first UK play post lockdown. Through his label Eglo Records, his band Floating Points Ensemble, his work with the London Symphony Orchestra and his sought after DJ sets – Floating Points has established himself as one of the most respected acts in UK dance music. 3 hours of this man at the helm is a scene to be excited by.

Playing on the Tom Dixon DJ stage, we have one of the most notable bands to emerge from UK contemporary music in the past decade. None other than the Mercury nominated, British producer duo Jungle, whose third album ‘Loving in Stereo’ will be released 6 days after this show on August 13th. Jungle’s music is infectious and their DJ performance from the Tom Dixon structure will be a rare opportunity to see them play in an intimate and unique setting.

Straight off the back of his highly acclaimed debut album ‘Actual Life (April 14th – December 17th 2020)’ and ‘Marea (We’ve Lost Dancing)’ quickly becoming the track of the summer, Fred again.. will perform his Live show for the very first time on August 7th. An eagerly anticipated worldwide debut.  With their third album ‘Swimming Static’ recently released, Elder Island joins the event with their house-influenced dance music and intoxicating Live show.

London favourite Josey Rebelle will play a key slot on the Tom Dixon stage with her genre-bending sets. Musician, producer, broadcaster, DJ and one of Ninja Tune’s favourite Nabihah Iqbal brings her wide ranging sounds that draw on her experiences in her native Pakistan to the Tom Dixon stage.

Opening the Labyrinth stage will be London favourite Anu, whose sound’s blends Bollywood soundtracks, new age walls of ambience, early Hosono and party tunes. Anu’s selections always bring a smile to the crowds she graces.
Labyrinth’s curator and resident DJ Nick Castle will play an extended opening set on the Tom Dixon stage. This is a line up that celebrates the immense creativity of the UK – a part of our society that has been so badly hit over the past year – and we truly hope the scene is down to dance with these outstanding talents at the Tofte Manor opening.

August 7th will be the first time that the dance music community has experienced this unique space. Those who dare will find the Labyrinth.

Take a virtual tour and find out more about the venue here: www.labyrinthevents.com/tofte-manor

Guests will have the opportunity to walk the sacred labyrinth on the day of the show.