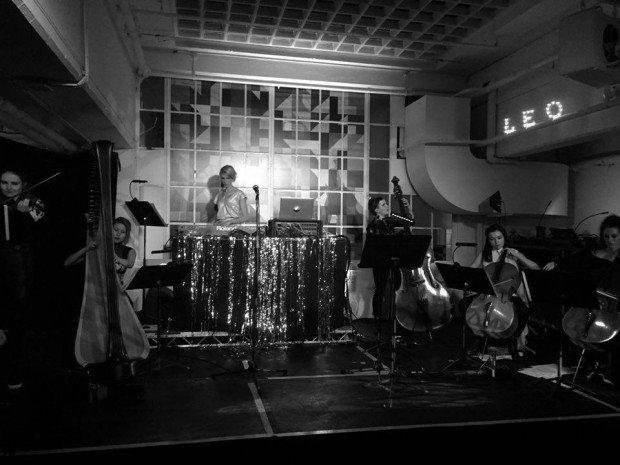 Every so often an artist comes along, propelled by the fuel of house & techno, who takes the music in a new direction and pushes the boundaries further than we expected, whilst remaining skillfully aware of the roots of the music they purvey as it’s lifted up to new heights of ingenuity and invention. Kate Simko is just such an artist.

As she glides around her stage setup in an impressive basement space beneath London’s Phonica Records, making fine adjustments to the output from her instruments on her live electronic flight deck, her sublime all female seven piece orchestra pick, bow and pluck their way through an invigorating set comprising mainly of tracks from her new album ‘London Electronic Orchestra’. And what an album to establish her as an experimental artist & composer, as well as her already ascending star as a house DJ and producer, now amongst these band members she’s forged a seemingly perfect union both live and on the album.

It’s that record that you’ll want to play before you go out, then as you drive to your club for the night, then on the way back again you’ll really notice its warmth, and then you’ll put it on again at home as its layers of strings and symphonic beauty wrap themselves around your open ears like a reflexologist working your lobes & relaxing your mind, as complete immersion in the finely tuned world Kate and her London Electronic Orchestra (LEO) have created is now possible.

Lo fi flamming handclaps & fingerclicks, shakers and ride cymbals, all provide a kind of lovingly ‘home brewed’ housey rhythm section, giving the music a pleasing and perhaps familiar pulse, whilst the bright orchestral, regal & refined strings, in all their glory, create a sophisticated yet inviting swirl of rich harmonies, unison and a ‘realness’ that most house or techno tracks cannot attain in their upper layers. Nor would they even try to. Sooner or later somebody had to come along and do this, and here she is.

Looking every part ‘the electronic performer who is also a dj too’, she fills the Phonica store’s underground room on a chilly evening in early March with her elegance, thoughtful movements and an air of charismatic grace, as the music does its job of captivating and illuminating the attentive crowd comprised of djs, fabric regulars and staff, music industry peeps and some loyal fans, all happily keeping the free bar bustling and giving the large space an almost family atmosphere. The people here look like what seems to be a good representation of the electronic communities of Berlin, LA and London.

‘Tilted’ seems as if it’s been beamed here from some 80’s pure pop soundtrack, perhaps a parallel universe Madonna song awaiting her presence. Chiming pizzicato strings, fluttering keys and swooping cellos compliment an almost robotic synth bass workout amidst those ever gritty drums, perfectly juxtaposing each other in a dance of sheer delight.

‘Stara’ dances and moves about like fish darting around a pond, small 808 grooveboxy smooth drums perfectly aligned with the skippy & cleverly syncopated orchestra, all urgently moving and creating a cool afterhours clubby party vibe, showing just what a duality this new music displays. You’ll be as happy hearing it loud at 5am on a huge system at a club as you will on the train or at home in your headphones.

There are some notable star guests collaborating on the album, Jamie Jones shows up to make a memorable appearance on the LP along with vocalist Jem Cooke, providing a real highlight on the now familiar single ‘One Time Game’, a blissed out melancholic deep houser that puts all other wannabe melancholy house records to shame. With its vintage Indie pop classic three chord structure bolstered by glistening synths and alluring bass, it’s like a song from a sci-fi movie that hasn’t been made yet.

There’s Kate’s remake of The XX ‘Intro’ included here too, showing her healthy respect for all things shoegazy and Indie which thrills us all here no end.

When Matt Tolfrey’s Leftrooom imprint delivered Kate’s EP ‘Go On Then’ feat singer Jem Cooke back in 2012 there was some shuffling and huffing and puffing to be done in djs’ studios, spaces, offices and bedrooms (and of course dancefloors) as a glistening piece of underground house came along and did all the right things. Yes, its hats hissed, its kicks boomed, percussion skipped, yet atop all of this lay the most perfect melodic structure and vocal arrangements shimmering like a golden ratio for a new dawn. ‘Technoey, Housey, sort of Songy, Deep music that’s well, really good’ was at least one of the vivid descriptions thrown around for her triumphant EP back then (quite possibly by this particular dj and reviewer), and it was plain to see this artist was going somewhere new and getting there fast too.

So, the album really is a quantum leap in a direction that so many musicians aspire to, or even jump onboard without understanding the full meaning of orchestration, in the callous hope perhaps of acquiring some ‘film work in LA’ or something. No such accusations can be thrown around here however, as this album and its captivating live show so proudly wears its heart on its sleeve, beating and throbbing with that soul of House Music running through its veins, yet displaying the virtuoso intentions and talents of Kate’s LEO and their eponymously titled longplayer. A major landmark victory, then ? Yes.

The most important new album in dance music for more than 10 years ? Definitely.

* CLICK HERE if you do no see the SoundCloud player.