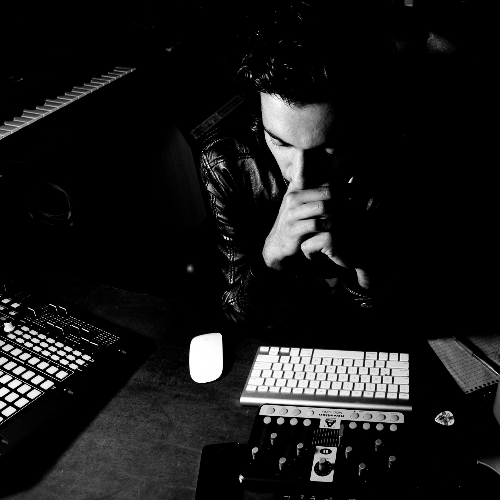 Interview with Omid 16B: Reincarnations

Omid Nourizadeh also known as Omid 16B, is a DJ whose passion for cutting edge electronic music is unrivaled. As a DJ and producer, songwriter, musician and label boss, Omid has forged a unique and prolific career as one of the world’s most talented and respected musicians and producers. He’s much regarded as one of the leaders who pioneered the tech house movement back in the early nineties, alongside the likes of Carl Craig, Vince Watson, Craig Richards, Mr C, Steve Bug and Francois K . Growing up in London, with Persian roots, Omid was influenced by the likes of Jimi Hendrix, The Cure, Depeche Mode, RIDE and The Mission. Throughout his teens he became an accomplished musician playing a list of instruments while attending Richmond College and utilizing the music rooms at any given chance.

He amazes us again with his latest release, a full length mixed album consisting of mostly his own material.  A producer, dj, and label head, this man seems as if he can do it all and his passion for it all is what gravitates us towards him.  We were lucky enough to get a chance to speak with Omid about his latest release, inspirations, and what makes him tick.

Thank you for doing the interview!  First off, love the new album!

– Thank you very much for taking the time to spread the message.

What was you inspiration for this release?

– Initially we wanted to start a mix series which was almost an artist album at the same time ..a seamless mix of pure harmonic expression and experience a journey through the sound of combined souls …it was not long after we decided to have more flexibility with the concept involving remixes and also re edits ..hence why we called the series reincarnations ..it’s a mixture and combination of 3 major  energetic and creative urges which tend to cover the entire spectrum of being a Dj, producer and artist ! This was a big step in how the focus is taken away from an ego being the centre of attention but more importantly the art form of creativity within the artists soul.

We really feel the sense of journey on this mix.  How important is it to you for a DJ to take you on a journey or tell story when they play?

– It’s about a transcendence of spirit with sound, not knowing who you are anymore, all your feeling is the energy and the message from the universal level without any idea what’s going on anymore …Your back to your centre, undecided, yet full of senses and feelings …this is what a dj in my opinion strives for and once your in that place, almost anything is possible.

Who are some of your favorite producers/DJs at the moment?

– We’re all as bad and as good as one another, all depends if the ego is the drive or the soul… When it’s the soul every single person has some thing unique and special to offer …when its the ego, its temporary and will be something you wished you’d never released years after. That’s just my opinion anyway.

With music production, running a label, and being a touring DJ, do you find it difficult to wear so many hats?

– Not really because its all the things I enjoy doing very much. Each of those things have the plus and minuses but ultimately make u stronger having more on your plate ..u just got to stay sharp and not waste time ..don’t always answer your phone because someone is trying to call you , try to use email where possibly and get back to people,  but call when you need to make the call , and don’t over explain your decisions just keep them short ..make some time for your self to have a break now and then and try not letting anything get to you ..keep your energy levels high and revitalised is the key for me.

We love your imprint, Alola Records, what advice would you give to someone if they were submitting demos?

– Be yourself and make music with feelings and don’t worry about style or genre , make sure your getting the best sound from your set up and don’t over produce anything ..I’d rather feel something unusual or unique than well produced nonsense that has no soul ..it’s a priority for me to have music that touches you deep inside.

You have a lot of love in LA, can you tell us a little bit more about your relationship with the city of angels?

– Recently Ive been their a lot as you pointed out so its like I  live there a few months a year, it’s a great city to meet the right people in the music and film industry ..u have great weather and the food is amazing ..I don’t like the traffic as I’m sure no body does but I’m very independent when I’m there and hardly go out so it’s a very peaceful place for me to stay, allowing me to listen more to music and come up with some good ideas. My little brother Nima who is a movie director is also based in LA so its great catching up with him when im there.

What’s next after the album?

– Dale Middleton is doing the next  reincarnations 002 in october so Im looking forward to that  ….. I also have my new Omid 16B album set to be released either end of this year or early next year, 77 trax that Ive built in the space of almost 20 years, not all of them will go on this album but the ones that will, will be a mixture of older trax Ive felt were ahead of their time when I made them in the past so I had to wait till I felt it was right and people would have a wider perception to how music is heard and felt specially in the electronic dance music genre which can sometimes be focused more on the dancefloor reaction rather than the feeling it can capture, the tracks that Ive made more recently are the essence of what Im about deep inside!

Thank you very much, it was a pleasure chatting with you!