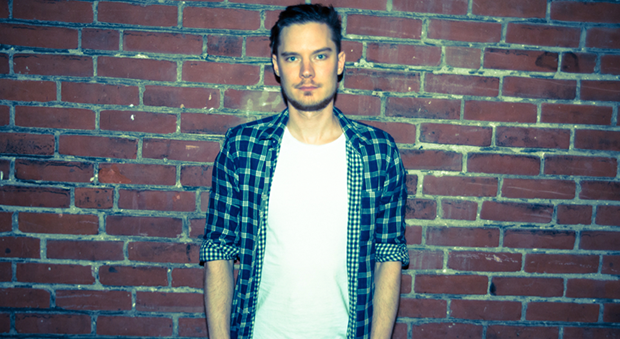 It’s always a special occasion when MANIK is in Philly because of his close relationship with the legendary Philly-based Ovum Recordings, a label he has five releases with, including his new 3-track EP In Walks Bourbon. I sat down with the producer/DJ ahead of his gig at CODA and before a pre-gig meal at famed Italian restaurant Dante & Luigi’s, a place as renowned for its clams linguine as it is for a failed mob assassination. We discussed house and techno, upcoming releases, basketball and why music is in fact for lovers.

Chris Manik: Trips down to Philly are super simple; jump on the Amtrak [from New York] and you’re here in an hour and a half. It’s funny because in my senior year of college, I became friends with a couple people in Philly through the internet and we always kept in touch. One of them, Sam Gan [aka Blueshift] is opening for me tonight – I’ve known him for almost eight years now. The last few years I’ve been coming down here it’s definitely been fun because of my relationship with Ovum.

Chris Burrell: Let’s talk about that relationship with Ovum. What’s it like to be so closely associated with such a great label and have someone like Josh Wink there for feedback?

CM: Josh and Matt are awesome, they’ve been running the label for 21 years now and have always tried to be true to themselves. It’s been Josh’s philosophy to stay true to what he believes in. He loves cool heady records. Whether it’s acid, full on techno or just deep house, if it’s a good record and it’s underground, he’s always been supportive of it. Right when I graduated college I sent him stuff and they picked it up and have always supported me since. I’ve made it a point to release with them once every year. They’re just great guys and I love what they do as a label.

CB: What was your approach on this latest EP you just released with them?

CM: I moved to LA in the summer and between July and September I wasn’t really producing. I went to Burning Man with my girlfriend and stuff like that. I also got rid of a lot of stuff, but kept most of my hardware. When October came around, I spent a week with the setup that I had and just wanted to get back to basics and make something that I would have made when I first started. I didn’t want to think about who it would be for, I just wanted to get down and start recording. After the first track and into the second track, I thought that it sounded like something that Matt and Josh would love, so I said to myself that I’m just going to finish these tracks and send them over next week to see what they say. They loved it and said it was like my old stuff and that they wanted to put it out. The three tracks on the EP are the first tracks I did after moving to LA.

CB: House Cut 2 is going down in sets particularly well for me at the moment. Can we talk about that Tweet sample?

CM: I had the track pretty much done and I thought it would be cool if I had a vocal chop in the breakdown. Just out of luck, I think that was the second or third sample I went through. The way I operate is that if I pull a sample or a vocal chop, I won’t necessarily start from the beginning of the record, I’ll just hit the spacebar and start moving the mouse with the music in the background. I heard that little chop and thought it sounded good with the beat. I started chopping it up and then like 20-30 minutes later, I had it laid out basically how the track is on the record. I might not have clicked on that one-shot for a while or something, but it was the second or third thing I went to and it just worked out.

CB: So now you’re on tour behind this EP?

CM: It’s the combination of a few things. This EP is kind of the main gelling point because it just came out about two weeks ago. I also have a record coming out mid-May on TEED’s label called Nice Age. It’s three tracks – two of them are a little bit more tech-y  and one is like a straight Chicago track. So I have two releases in the span of four weeks and we did this tour kind of as a meeting point between the two releases. This is my first half US/Canada tour and then we’ll probably do another one at the end of the year.

CB: Do you have a pre-show routine?

CM: This is a good example of what I normally don’t do before a show. I don’t usually get in with three or four hours to spare, so I took a nap earlier, watched some basketball, called a friend, got to meet you here, am going to dinner. 90% of the time it’s hectic – your flight gets delayed or some BS happens.

CB: I noticed from your Twitter that you’re a pretty big basketball fan – you like the Trailblazers?

CM: Playing basketball in Queens, I grew up as the kid who didn’t like the Knicks. Everyone loved the Knicks and I hated them. I was a huge Bulls fan, obviously a Jordan fan like every other kid. Portland was the other team I liked growing up because my Mom liked Clyde Drexler. I have no idea why, but she did. My girlfriend is from Portland and then I found an old-school Drexler jersey in my closet that I bought five or six years ago. It was a culmination of a few things and I kind of stuck with it. Now that they’ve got Lillard and a cool bunch of guys, I’m just going to ride it out for a little bit.

CM: He’s been a season ticket holder for the Sixers for like over a decade. Every game, he’s got the same seats. He’s been there since the Iverson days – he could tell you everything about them. The Knicks are worse than them now, so that’s funny to see. It’d be too easy to make fun of my friends that are Knicks fans, but I kind of feel sorry for them.

CB: The Sixers’ Together We Build hashtag is probably one of the worst I’ve seen in sports, but I guess it’s about looking to the future. With that in mind, what else do you have in the works looking forward?

CM: The three tracks on TEED’s label that I mentioned – I think people are going to like them a lot. Stuff coming out on Hypercolour’s offshoot label called Images. It’s more of a techno label, but those tracks still have a very classic Detroit feel to them. I also have some stuff coming up on BPitch Control. The lead track is a straight acid track and sounds like something Green Velvet would have done; very raw with some of my own vocals, kind of just like talking and real old-school sounding. I also took a month to put together a preliminary album. I’d say it’s basically done right now, but this is also the point where you’re in discussion with people trying to pick out what would and wouldn’t work. Just figuring out when and where it will come out – I’m hoping Fall or early Winter, somewhere in that 4-5 month window.

While wrapping up my conversation with MANIK, we got to talking about Music is 4 Lovers and it turns out that Chris met his girlfriend at a Music is 4 Lovers party! So there you have it – music is in fact for lovers!

Be sure to check out MANIK’s EP on Ovum, stay peeled for those other releases he mentioned and catch him on tour in a club near you.

Chris Burrell is a Philly-based DJ and radio host on WKDU Philadelphia.