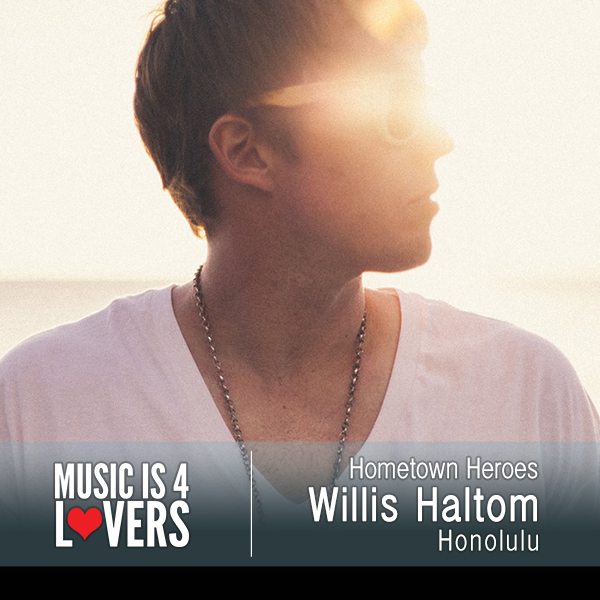 This week’s Hometown Heroes features club owner slash DJ slash producer slash promoter slash bail bondsman who, with the help of the Asylum family, seems to be single handedly keeping the house music scene alive on the beautiful Hawaiian island of Oahu. Meet Willis Haltom, the man behind Asylum, an after-hours club in the heart of Honolulu. If you’re a touring act in the realm of house and techno and you’ve played in Hawaii then you’ve most certainly played for Willis. We had a chat with the man of many trades about his future, present, and past; to spice it up we asked our questions in reverse chronological order. We also have a mix from Willis to add to the Hometown Heroes roster. Peep it!

That’s a tough one 😉 I’d have to say some Nigori Sake always goes down nicely, especially in the beginning of the night. Good Tequila always makes a night funner as well. Never know what might happen after hehe.

What advice would you give to an aspiring promoter?

I’d probably tell them that if you are getting in it for the money I’d think twice but if you love dance music and meeting cool people then jump in. It’s not easy starting out and even the most seasoned promoters lose their ass sometimes. That being said there’s nothing like throwing an amazing party with friends and doing what you love while making a little something. It keeps me young I know that.

What exciting news is on the horizon for Willis Haltom and Asylum?

We’ll I’m recently back in Honolulu after a long tour North America. Over that tour I got to play in LA at Sound, NYC at Cielo, Denver at Vinyl and Chicago at my 2nd home Spybar. It was great catching up with old friends and seeing so many cool acts along the way. I’m gonna try to stay put in Hawaii for a little while and keep focusing on our label we’ve launch called Asylum Confidential. We are up to our 5th release coming out on June 18th from Loic Tambay a resident with remixes from Matt Fear from Hot waves and Clint Stewart of Mobilee. A lot of other releases on the Asylum label are in the works as well coming from everywhere including Dragon Suplex our of Zurich and Hive Club and Christian Martin from Dirtybird as well as more EPs from the Asylum residents.

On a personal level I have a new remix coming out on HFN Music out of Germany with my good friend Lopazz of a cool group called FADED RANGER. It’s a slowed down groovier track which we have a vocal and a dub. That’s seeing a vinyl release which is nice. Lopazz and I also had a remix come out recently on MOODMUSIC out of Berlin as well. I’m working on a couple other remixes with good friends Phillip Charles and Randall Jones for Lopazz. Those should be out soon. Not sure which label but they are two different but very cool tracks. Phillip Charles and I are working on a lot of original material as well that should be out soon on the Asylum Confidential label. Randall and I have a bunch of finished stuff as well that should be out quite soon. So quite a lot of music should be seeing the light of day soon.

I have been to Europe the last two summers playing everywhere from Watergate to Zoom in Frankfurt to a special Kubicle afterparty in London after Lovebox festival. I plan to get back there at some point this year hopefully and also make it down to Dubai for some parties my friends are doing out there now.

Asylum keeps on trucking. We will be celebrating 6 years in November and I’m sure I’ll have some crazy parties lined up for that. The bookings always seem to get intense at the end of the year. I think people like coming to Hawaii when it gets a little colder everywhere else. One booking we do have on July 3rd is DEEPCHILD from berlin. This will be his 2nd time playing for us.

Asylum presents Dubfire, Saturday June 21, WOW, big booking! How did that come about? What other big bookings are on the way that you can tell us about?

Well I was just about to head to Detroit for movement when I got contacted from his agent. I met dubfire last summer at Wavefront festival in Chicago and we talked about him coming out. As you can imagine he’s pretty busy so it was hard to make the dates work but he is playing EDC on June 20th and he really wanted to come out and had an opening so we made it happen. His tour manager/sound tech ENDO also just played here a few months ago and I think he let him know how fun the party is. We have a special boat party planned as a special afterparty as well that sunday 🙂

I’m working on a bunch of bookings toward the end of the year after burningman. We do more locals in the summer it seems. Our good friend Lee Foss will be back at sometime this year and one of the Visionquest guys I’m hoping will make it. I have a feeling he will but I don’t wanna jinx it. I’m sure some of the Dirtybird guys will also be back out at some point. They are our brothers from another mother.

Tell us about Asylum.

Asylum is a members only afterhours in Honolulu, Hawaii. We’ve been voted in the DJMAG top 100 clubs for 4 years straight. the first time being #60, then #50, then #77 and this year #100. We were also named one of the top 5 intimate clubs in the world be DJMAG along with spybar, sub club and some others. That was quite the honor for sure. We’ve strived ourselves on bringing quality house and techno to Honolulu for the last almost 6 years. We are open on fridays and saturdays with the occasional off day as well. Our hours are from 12:30am-8am or whenever we feel like stopping. Sometimes we go really late. The sound in Asylum is something we pride ourselves on. It’s Dynacord sound throughout. The layout of the club is a front mainroom, a backroom, a bar area, and a patio. We fit roughly 200 people at the most. My partner Darren Zane does a lot of the lighting and sound for the club along with Chris Cartier. The club was first built out of a necessity for somewhere for me and my close friends to play the music we wanted to. We keep striving to make improvements and have a vibe like no where else. It’s been fun making it happen the last 5 1/2 years.

Do see more music production for yourself in the future?

I see a lot more music production in my future. I’ve been fortunate to have remixes on such labels like Get Physical and Dirtybird with my friends like Lopazz and Randall Jones, etc. A lot more original music will be coming out in the coming months on the Asylum Confidential label, which is what we are really focusing on here in Honolulu now. We have a couple nice studio here cranking it out these days.

What is the greatest challenge and/or advantage when it comes to being both a DJ and a promoter? Rather than just a DJ, or just a promoter.

I’d say the greatest challenge is finding the time to focus on one or the other. When you just dj/produce you can really focus on that and not worry so much about the party but more your music and what you’re gonna play that night or work on etc. Promoting well takes a lot of time. Making sure people know about the party, setting up, getting the talent. That’s just a couple things you need to do, there are a ton more. But when you are the promoter and a DJ you can book your friends and you can make sure the music is right and the whole night is good along with play yourself. Sometimes you’ll play an event you don’t promote and the music just isn’t right but you don’t really have a say in that. It’s not your event so personally I like being in control of the event more.

What came first: the DJ or the promoter? Tell us how you got started.

I started djing in 2000 so 14 years ago in Colorado. I was a dj before anything else. I saw Sasha and Digweed at a party in Denver and really started falling in love with dance music and djing. Since then I went to Full Sail in Florida to try and learn more about production and engineering. After I came back to Colorado from Florida to finish my bachelors degree at CSU I started throwing some small events and djing more. My first event I ever booked some well known djs was with DJ THREE and Sean Cusick back in 2004 i believe. That didnt go so well but it didn’t realy stop me from wanting to dj and make music. I then moved to Honolulu and started djing out here at a club called Nextdoor. I did that for a while along with some other places in Honolulu and then when the time was right my friends and I opened Asylum in an old recording studio. Move ahead 6 years and that’s where I’m at.

What did you want to be when you grew up?

Well growing up I wanted to play baseball and in highschool football but I went to college and started djing my freshman year and totally fell in love with dance music. The first act I kinda really knew was the Crystal method and now after all these years those guys are my friends and have played at Asylum twice. I feel very fortunate to have met so many cool people through this little club. People I look up to and have inspired me. Lopazz for instance is one person I have always really liked his music and now I work with on a regular basis and have been all the way to germany to hang with. He comes here quite often as well.

One little fact not a lot of people know as well is I own a bail bond company in Honolulu. It’s def not something I ever thought I’d be doing growing up but I kinda fell into the job and now own my own company. Along with everything else it’s keeping me busy.