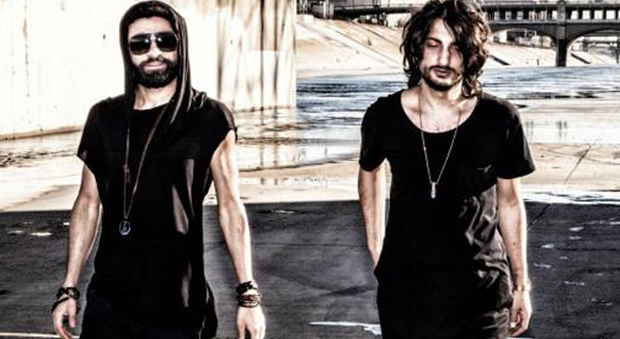 Well-known for their parties in the Middle East and California’s West Coast, Cyril Bitar and Ahmed Elwan quickly connected, as they shared a like-minded vision. Their complementary acumen in music and culture spawned the right recipe for rhythmic harmonies and luscious melodies. Leaders behind underground events, such as Clinic Wednesdays, Minimal Effort, and CapsuleM LA. Cyril and Elwan have emerged as a dynamic duo, also known as Human Resources. This duo’s style not only matches, but compliments the ambience of their parties. Having played all over California, as well as Beirut, Cairo and Turkey, Human Resources combines Californian style with Middle Eastern patrimony linking together to devise a one-of-a-kind sound that enthralls the listener. Taking guidance from artists such as Acid Pauli, Adriatique, Aidan Levelle, Audiofly, Dixon, Damian Lazarus, Droog, Tale of Us, Fur Coat and labels such as Get Physical, Culprit, Supernature, Innervisions, URSL, Cityfox, Akbal, Pokerflat, Hot Creations, All Day I Dream, Rebellion, Crosstown Rebels, and many more; Human Resources administers raw, yet lively and sexy, vibes that resonate throughout. In 2016 they plan to make their production debut and release their highly esteemed EP adhering to the guidelines set forth by their predecessors earning them respect without delay.

How did you get mixed up in this crazy world of electronic music?
It was around 2010 that I began throwing events. I was determined to throw my own parties when I became passionate about the music scene, but was finding it difficult to get booked (back home in Lebanon). Following that, a group of my best friends and I started throwing parties under the moniker ”Underrated Crew” which consisted of 3 Djs and one Photographer this eventually evolved into a series of events. Today, Underrated is my company that runs Minimal Effort, Clinic, etc.

Who were  some of your biggest influences growing up?
Although many individuals played a role in my introduction to electronic music, my older brother, Danny played a big part in that. Not only did he introduce me to the music, but as a promoter himself, he taught me a lot about the industry.Your originally for Lebanon.

Can you tell us about the scene over there and how it compares to the US?
There are many differences between the two. The U.S. is such a big country that I think it’s ideal to compare Beirut to a city– not the entire country. As far as Los Angeles, the main difference would be venue limitations in LA vs. Beirut. The city of LA’s restrictions make it much harder for promoters to acquire venues Vs. Beirut. On the contrary, the scene in LA is much bigger which makes it exciting.

You have been throwing one of LA’s best weekly parties, Clinic Wednesdays, how do you continue to keep the party current and so good week in and week out?
Despite where Clinic is today, the vision has been the same since day one. Solid bookings in an intimate club, week-to-week, and strong promotion/marketing. Over the years, Clinic has seen a solid roster of house and techno artists. As for the challenges, there are many, but as a brand builds an identity, it begins to gather it’s own loyal crowd, which I love about Clinic.

You also host one of LA’s biggest events, Minimal Effort, tell us a little about that and what you feel you bring to the LA scene with it?
As Minimal Effort began in an illegal warehouse in Downtown Los Angeles, we are proud to see where it is today. Taking greater risks, while ensuring our vision stays true and consistent, has been the anthem to our progression. With that being said, we appreciate the versatility LA has to offer and strive to accommodate that. Minimal Effort brings accessibility to the LA scene. The motive behind Minimal Effort is quite simple. Build it and they will come; top-notch sound system, sensational environment and a versatile, high-quality lineup that can be appreciated by all. It’s about making it accessible for anyone. You need “Minimal Effort” to enjoy our experience.

Who would be your dream booking?
It’s hard to say really but if I had to choose one it would be Ricardo Villalobos, definitely.

When not listening to electronic music, what do you vibe on?
I prefer to listen to a lot of dream pop and indie rock bands such as Beach House, The National, etc. That kind of music enables me to be creative.

What else do you have planned for 2016?
Minimal Effort will take place on October 29th for Halloween and December 31st for Minimal Effort NYE. We will make an announcement very soon with more details. Aside from ME, Underrated Presents is throwing Flying Circus 10 Year Anniversary next Sat, May 21 with DJ Tennis, Audiofly and more at the Globe Theatre in Downtown LA. Following that, we are throwing the Visionquest showcase in partnership with The Well.

Can you tell us about this mix?
This mix includes some of the current favorites as well as some old tunes. It starts slow then shifts toward a clubbier sound. Hope everyone enjoys it.

Favorite drink?
Depends on the setting, if its a night at the club, Champagne. If I’m staying in/hanging out in my house- Baileys all day.