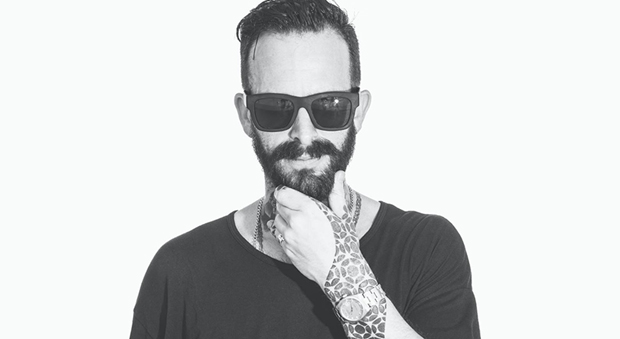 We love stories of hard work paying off. Barbuto is a figure in the circuit that’s smart and busts his ass to make magic happen. Soon after moving to Austin via Sacramento, Barbuto started up a music blog — Electric Avenue ATX. Following his own philosophy that “DJs should work inside the industry in some way and not just play music,” the site was Barbuto’s contribution to the blossoming and robust scene in Austin. The dedication and concentrated attention it takes to manage a blog paved the path for Barbuto to glide to the top of Austin’s electronic music scene. Resident DJ at Austin’s premier nightclub and after-hours spot — Kingdom; promoter for his own branded dance party — bas_mrkt, which is going on it’s 50th event; and now Barbuto is the latest addition to the Octopus Recordings roster, Spanish label run by techno icon Sian. Barbuto’s debut EP, ‘Arcana,’ released this past April on Octopus, was well-received in the techno circle and is now working on a second EP release for the Barcelona-based label. This is a Heroic example of buckling down and focusing inward to generate the energy needed to grow a life doing what you love. Hometown Hero indeed!

How did you get into House & Techno? Was there a specific moment of revelation when you decided to pursue a life behind the booth?
I started going to underground parties in Belgium and Holland when I was about 18 or 19. The venues where everything from massive clubs to dug out bunkers in fan fields, and the volume was so loud communicating was impossible. Then in 1999 at a New Years party in Sacramento I decided to buy gear, after that it was on. I went through all the genres and landed at house and techno from hanging out at places like the End Up in San Francisco nearly every weekend.

What’s the scene like in Austin? How has the boom of underground music affected the parties in ATX? How do you position yourself, as the music gets increasingly trendier?
The Austin scene is very special because we are a small city of under a million people in the entire area; however, we have the biggest names of every genre of dance music playing Thursday through Sunday every week at any of several clubs with really high quality sound. There is also a strong fleet of local DJs playing really intelligent deep house around town in really cool quirky venues. Fortunately it is steadily growing and the parties keep getting more fun! I am really lucky to play every week at really cool events.

Kingdom Nightclub seems like go-to spot in Austin. Tell us about your residency there. What lessons have you learned as a DJ during your tenure?
Kingdom is the central spot for consistent music each week. For the last few years during it’s growth I must have played well over 100 shows! What is for sure now one of the most intense after-hours spots anywhere and with it’s massive BassMaxx system and super luxurious DJ booth I got lots of mixing practice. Now the club has graduated to premier A list shows every night so I am really lucky to have a night per month to myself and a guest usually from Octopus or Drumcode to play from 10 till 5, so it’s super fun. I am also really lucky to open for some big acts that the main promoter Real Music brings in. We have Kevin Saunderson, Sasha Carassi, Black Asteroid, Juan Sanchez, Mark Reeve, SIAN and Weska coming up. Sacred Sounds just had Matthew Dekay last Friday; he was amazing. As far as lessons learned, Kingdom has been a huge part in teaching me everything, but I have so much more to learn; it’s a big business!

Let talk production. Tell us about your forthcoming release ‘Arcana’ on Octopus Recordings. How did your relationship begin with Sian? What’s on the horizon for you now that you’ve signed with the prestigious Spanish label?
‘Arcana’ just came out on Beatport last month released as my last name Barbuto, and it is doing really well. I am inspired to get so much great feedback. I had booked Sian a couple of years ago and we hit it off like old friends, so with open communication he started to give me really solid feedback on my productions. I must have sent over 50 tracks before they started to get close to sounding right for his label. Since ‘Arcana’ I have done probably over 20 more, so now I am actually just starting to like my own stuff and find my ears. Next month we are doing my 2nd label night after WMC at Coda in Toronto, and I am halfway done with a 4 track EP that will hopefully get done and out by the end of the year.

Talk to us about your branded party bas_mrkt. How did the party start? What do you find to be the greatest challenge as a promoter? How does it feel to be going on the 50th bas_mrkt event?
We started this party over 4 years ago as an all day and night Sunday monthly, because there was nothing going on on a Sunday at that time in Austin. We wanted that feeling that we all know about after an entire day of house music and drinking! The biggest challenge of being a promoter these days is just getting the word out that something is happening, creating the buzz and getting enough people out in what is a tiny city to make a party feel good. Fortunately we have been doing that good enough to hit #50!

You’re a busy guy! Among all the other tasks at hand, how do you find the time to also manage your own blog – Electric Avenue? What motivated you to start up the site?
The site is fed by the other promoters in town and I all I need to do is hit the upload tab after I approve it so its really easy. Honestly, I started the blog as a contribution to the city when I moved here as a thing to introduce myself as, and not just another DJ moving to town trying to get a gig etc etc. The blog has been the central reason for having gotten established. I really think that DJs (unless you are super star producer status) should work inside the industry in some way and not just play music.

Dream gig…
Every gig is a dream to me.

Tell us about your mix.
This is a mix of sounds from artists who I play all the time but a selection of their deepest work that I feel is a match to the vibe you guys have going on. I really enjoyed making it.