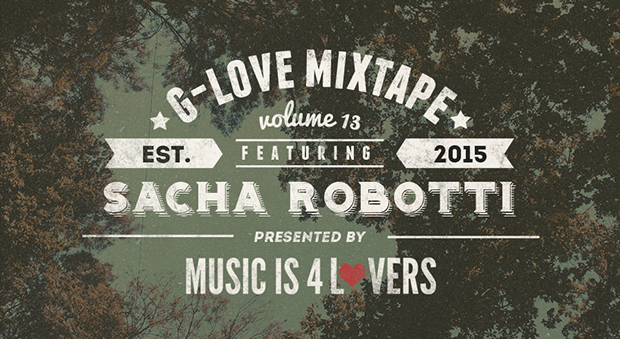 After a brief hiatus, we are back with a HUGE G-Love mix for you guys! On this episode, we are incredibly excited to bring you the musical stylings of Belgian producer, Sacha Robotti! Sacha has had a huge 2015, and this year is shaping up to be just as fat. With releases on heavy-hitting labels such as Dirtybird, Suara, and the up-and-coming This Ain’t Bristol, Robotti is making some giant waves in the underground house scene. So, enough with the talking, let’s get moving and grooving to the booty shaking sounds of Sacha Robotti!

My dad and my mum (rip), my sister, my aunt and uncle, the Dalai Lama, Rick Rubin, Tim Ferriss, Eckhart Tolle, Einstein, Jeff Mills, Vonstroke & family, Justin Lizama, many more I’m forgetting to mention, and anyone who’s „making it“ against all odds.

2. What is the hottest track in your arsenal?

I know it might sound cocky, but right now the track I’m most looking forward to play is my own track “Dooky“!

3. Where do you dream about playing?

Obviously if Nasa or Virgin called and asked, I’d be down to DJ in a space ship in zero gravity or on another planet. Being more realistic, most DJs would probably say DC10 and Panorama Bar / Berghain; for sure I wouldn’t say no either. But my biggest dream would be to DJ at Fuse in Brussels. It’s the first club I went to when I was 15 in ’95 and I’ve been wanting to play there ever since! Also, Womb Tokyo – heard about that place for ages, same goes to Rex Paris. Warung in Brazil is a spot I always wanted to play at, as I love the outdoors / semi outdoors and Warung is probably one of the most spectacular venues of that kind. For a while I’ve been dreaming about playing American festivals like Burning Man, Coachella, Lightning in the Bottle, CRSSD.. and it looks like this will all happen this year! So stoked!

4. When is your next release dropping?

I made a remix for Billy Kenny that’s coming out in April on This Ain’t Bristol! Also, my track „Viral“ is going to be released by CRSSD Festival on their spring compilation. Kevin Knapp and I finally signed a record on Leftwing & Cody’s label Lost that’s coming in April. This is everything I can announce right now!

Haha! If you mean G as a term of endearment, thank you, I’ll gladly take it! Especially if that involves speaking your mind, being open and real with people, and making the best of out life.

6. How do you make all them hot tracks?!

Because I so G?