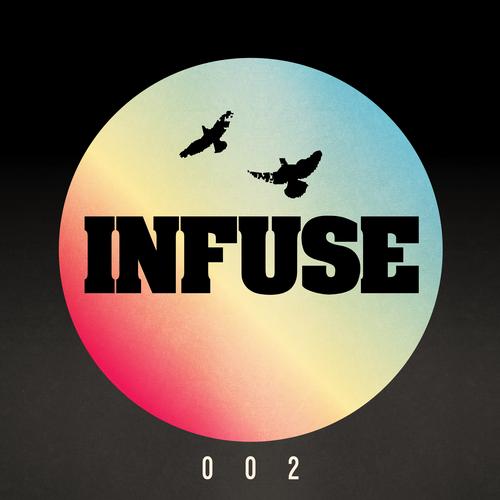 Although Fuse has been around since 2011, they are news to my ears and are easily one of my latest obsessions. Fuse London sub-label, Infuse, returns this June with Infuse002 featuring tracks from Houmz, Mariano Mateljan, Pat Ondebaak, Steve Abot and a remix from residents, also my latest addictions, Enzo Siragusa & Seb Zito. The Infuse imprint was launched in March of 2013, as a platform for affiliates of the Fuse London crew to release their works. The various artist package Infuse001 launched the label, with records from Jun Akimoto and Steve Abot, Samu.l and Pat Ondebaak who return again for the 002 single.

The release kicks off with Houmz ‘Clorophilia’, a low-slung percussive workout that steadily builds in a purely drum and bass driven state for several minutes before dreamy pad melodies and bubbling glitchy electronics push the record into an ethereal moody vibe. Up next is ‘Mountain’ from Pat Ondebaak, again relying on a stripped-back feel with its jazz infused organic percussion, while warbling sax licks and gospel style vocals drive the musicality. Seb and Enzo offer up a remix of Samu.l’s ‘The Traveller’, the duo implant their signature shuffled drums on the original and extract snippets of the originals tonal and synthesized elements, reworking them into their own style and creating an understated classy interpretation. Steve Abot and Mariano Mateljan close the release, Abot turns in ‘High Moon’ while Mateljan offers up ‘Deux Jours’ both cuts take a slightly different approach to the previous tracks, veering into dub-techno territory with an airy feel, raw, loose drums, a profound low-end depth and cavernous atmospherics.

This is yet another outstanding package from Fuse full of intriguing intricate records. They are not only on our radar now but sitting pretty at the TOP. Impressed and in love with their sound, we will definitely be keeping a close watch on what Fuse and Infuse have for us in the future.