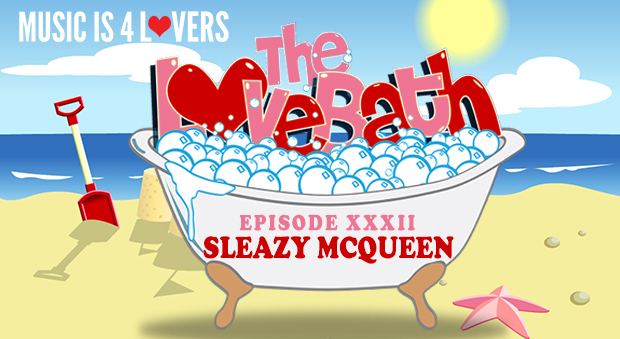 Greetings Earthlings: The Silver Rider here! Would like to take this opportunity to announce my inclusion to the Music is 4 Lovers fold as I join the team to curate your dose of funky, groovy, disco vibes! I’m super stoked to be onboard and ready to lace y’all with all the exciting sounds I’ve got upcoming from some of my favorites, and hopefully soon, your favorites as well.

Alright, let’s not waste any more time. Our first tandem dive into The LoveBath comes from one of my favorite humans and major mentors, the one and only: Sleazy McQueen. As founder and head honcho of the Whiskey Disco label, McQueen has helped to springboard the profiles of many of today’s modern disco ambassadors and worked with an impressive list of talent from Jacques Renault and Bottin to Closed Paradise, Kon and Pontchartrain (now Whiskey Disco’s co-label head).

Since launching the label in 2009, McQueen has curated over 50 vinyl releases and recently launched two sub labels, Whiskey Disco Small Batch and Lovedancing. In addition to recording his mix installment, McQueen graciously donated the time to sit down and hash out a few deeper points into his label work, current favorite tunes and assorted odds and ends. Enjoy!

As founder of Whiskey Disco, you’ve had the opportunity to work with a bevy of global talent from the modern disco community… Any exciting projects on the horizon you can share with us?
Whiskey Disco has always attempted to expand it’s artistic footprint over the past 8 years. Combing new, fresh talent with established artists has always been a way to keep the label consistent, but exciting. Out next few releases reach from Shanghai to Atlanta, Russia to Colombia.. a global community is something we strive to connect.

Lovedancing just had its third release with a mega EP from Israeli duo, Rabo & Snob. We heard through the grapevine that this project was some time in the making…can you give us a bit of background on how the release came about and how the reception has been?
Thats definitely true, Lovedancing 003 has been over two years i the making. Rabo and Snob have become somewhat of a mainstay over at Whiskey Disco HQ. In addition to their “Yawumna EP” that just dropped on Lovedancing, we’ve done three solo EP’s from the pair on WD and they even made an appearance on the most recent Small Batch outing.

The boys traveled from Tel Aviv to Ghana to capture unique vocals for some tracks they’d been kicking around. While walking the Ghanan markets, they met Soma Idirussu, who provided the lead vocal and percussion for the EP’s title track. The outcome of their trip, the recording session and subsequent vinyl digging are two of the most amazing songs I have ever had a part of releasing. Once we threw in Art Of Tones and Jacques Renault on remix duties, I knew we really had something special on our hands and the reception has been absolutely stellar!